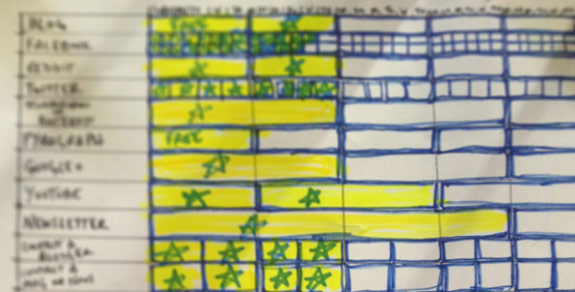 Ten weeks ago, I started a checklist. This checklist is fully responsible for the success that I am now appreciating.

I call it my “Checklist of Doom.”

The checklist itself is not a new concept: do these items every week. I think you’ll agree, though, that my execution is different than most checklists you see these days.

My mom calls me a “tactile learner.” All I know is that a huge piece of posterboard that I draw on is more motivating than a 3”x4” piece of touch-sensitive glass.

I have gone through and figured out what things I must do every week, and the frequency with which I must do them, in order to propel my business and relationships forward successfully.

I commit to finishing the checklist whether or not I think it’s doing anything. Even if it seems stupid to have to comb through blogs and news sites looking for the article I have to send someone, I do it because it’s on the list. When I send out press samples, it’s to fill a box on the list, not because I expect results. Results have come, but long after my non-checklist self would have given up.

I’m on version 1.1 now. Version 1.0 had fewer items, and shorter timeframes. Now, I have more things to do but longer to do them. Some things that weren’t working (twice per week on Pinterest) have been replaced with either StumbleUpon or Pinterest.

Fifth, it’s not just about work.

Or, rather, it more correctly reflects the reality of my life: Work is part of life, and life is part of work. I have to go for walks. I have to contact retailers. I have to eat vegetables. I have to make soap. I have to keep up relationships with friends and family. And I built a day of rest into Version 1.1, which may seem obvious, but has always been hard for me to master.

Here’s how it works: Each column is a week. 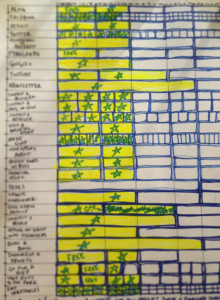 Within that week, I have to do a certain number of things. For example, four Twitter “times” per week (I don’t count tweets, because twitter is about interaction, not just broadcast), one time on Pinterest, make six batches of soap…. And then there are multi-week things, like newsletters and YouTube—I only do those once every four weeks.

If I want to or need to opt out of one item (this week it was a press release—I have nothing to release), I have to do an extra credit like closing a wholesale order or sending out my wedding thank you cards (yeah, yeah, that’s super-huge).

(The yellow and blue don’t mean anything special, I just like drawing stars and I like the aesthetic of watching the checklist turn gold brick by brick. It takes off some of the “Checklist of Doom” edge.)

I have goals associated with weekly, monthly, and 6-month goals (I just made the 6-month goal a couple days ago…I wanted to be sure the list worked first). Right now, I have planned to go gold-panning with Russ as a reward for four consecutive weeks of completions. I have to do it or he’s going to be very upset. He’s been looking forward to that trip.

Sometimes it seems like I should not make soap or contact a retailer because I have to work on my product catalog or some other important-yet-time-consuming thing. But I have made a commitment to finish the list FIRST, even if I don’t feel like it. And it has paid off. Not always immediately, but eventually…. Like how the associate editor of VICE wants to interview me when I am in NYC—I sent that package ONLY to check off that box on the list (I love VICE, but it was a super long-shot). It took four weeks, but someone got back to me. During that time, the press pack felt like I had thrown it into the abyss, but I had faith in the list, so I just kept plugging.

The things on my list are probably not the things on your list, but I really recommend making a list, and sticking to it. If there’s something unpleasant that you have to do, it has to go on the list. If there’s something you do that requires “inspiration,” which is hard to come by sometimes, put it on the list. Slog through it even though you might not feel inspired. For instance, I don’t always want to write Pyragraph posts, but well, here I am.