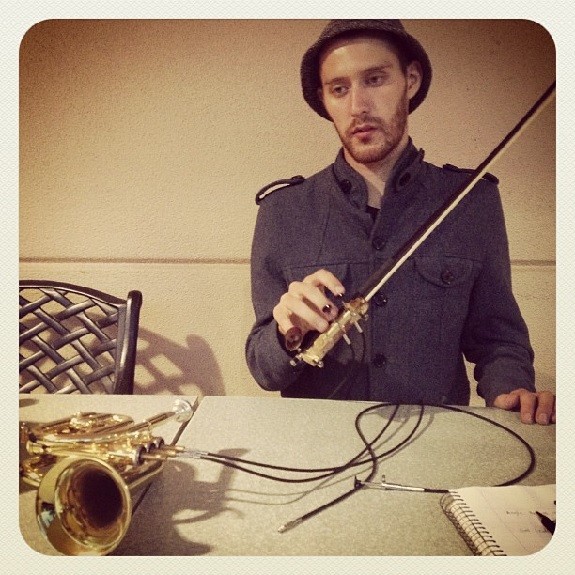 I get quite a few different reactions when I tell people about the “.”

Def: n. That which allows the playability of trumpet and viola at the same time by one mechanical means or another. Ex. (similar) a trumpola enables the simultaneous playing of the viola and trumpet much like the harmonica brace allows a guitarist to play both harmonica and guitar.

Some of the reactions are mixed and others are pretty straightforward. For instance, some will have a conniption fit (not really) when I describe how my trumpet and viola are in love and that they are going to get married, whether they like it or not! Others will be like, “Wow. Okay. More power to you.” Usually I don’t let them get past “Wow” before I explain how I am going about making the trumpola possible.

I usually get two different reactions at this point: The first: “Amazing! That’s the best thing ever! You’re going to be famous!” The second: “Why? What’s the point? How are you even going to do two things at once anyways?”

The first reaction is pretty fun. It feeds my ego; that which lives off of limelight and the stardust that shimmers from the silhouettes of my idols. I don’t know how realistic it is, but I like to entertain the possibility they are right. I certainly don’t want to be struggling all of my life. I am willing to make the sacrifices now, but will I forever?

The second reaction is kind of a challenge.

It forces me to check reality and face the possibility that what I am doing may have no merit whatsoever. Sometimes I fail at explaining why it is the best thing ever as I gaze into the eyes of the cynical. The worst are those who legitimately and sincerely wonder where the merit lies in this pursuit.

“How are you going to do two things at once and not play both half-assed?” “Isn’t that going to stunt your creative flow and make you a rigid player?”

And then there is that hidden question I desperately hope will never be asked because I would hate to skirt an answer, but is subtly present in the question: “What’s the point?” Because part of the answer is, “To get famous, to be acknowledged, to be renowned, to be considered great!”

The answer to that question forces me to face the potentially accurate judgment that I am at least self-centered. I admit this is at least partially true. I have to determine if the merit of pursuing and completing this project is more than just masturbatory.

But don’t all artists have to face that question?

Questions like “So what?” are at the tip of every critic’s tongue, including the critic within each of us.

It is inescapable. How do we console ourselves when others (or even we) call into question the value in what we do? How do we cope?

Do we tell ourselves that, at the end of the day, at least we pursued our passion, that we worked with others to make it happen, that we shared joy and toil with others in its pursuit, and that we added one more thing to the world that is of pure passion, creativity? One more beautiful thing to marvel at? (Can you even say that? If you can’t, are you at least able to cope by saying, well, at least I did something with my time, with my life?)

My whole deal is being so unique I can’t be dismissed. So good, I can’t be ignored. I want to do that which seems impossible; become a legend. Sure, I realize just how much more valuable it is to maintain friendships and take sincere interest in others, and value family and long strolls through forests and hikes up mountain trails. But is it so wrong to be willing to sacrifice those things for stretches to pursue legendary status?

Is it so wrong to pursue beyond us, our capabilities, our perceptions, our potential: sehnsucht?

Of course there is a balance to be had.

In my pursuit of the “trumpola” that which at least seemed to be beyond possible became possible. I worked with others, maintained friendships and had the support of my family. I’m not talking complete isolation here; I’m pondering ego and accomplishment within the arts. If I’m not trying to cure cancer or affect positive or progressive social change, what’s the point? What’s the point, if a dream isn’t practical or isn’t perceived as great, or even good, by another person? Why do we do what we do?

Because we love it. And can there be any greater merit than love?

Check out Chase Kolozsy’s Kickstarter campaign, which is raising funds to make an animated film about the marriage of Trumpy and Viola. 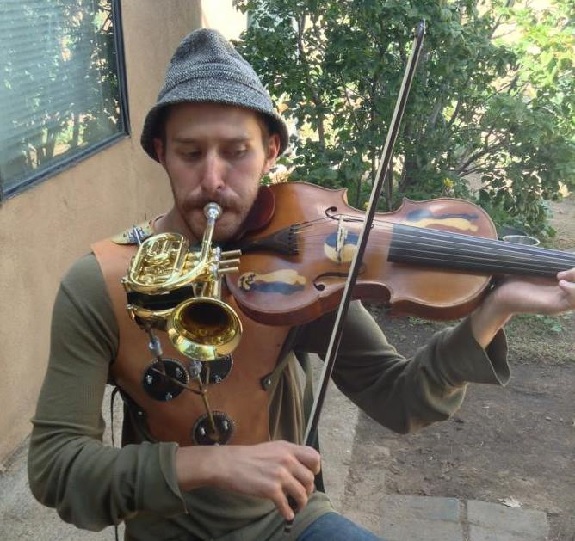 Chase Kolozsy is a do-it-yourselfer aiming to design and produce his own content for performance. He attends UNM in pursuit of a multidisciplinary degree spanning Design for Performance, Dance Choreography, Music Composition, and Media Arts. He loves to street perform, improvise musical skits, compose music, dance and rollerblade while playing viola.

View all posts by Chase Kolozsy →