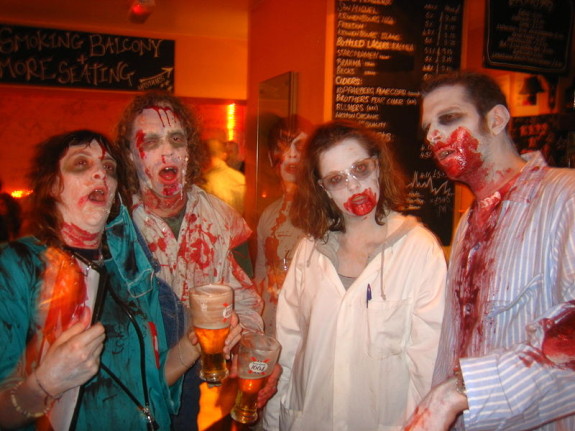 I’m not really frightened by zombies.

But I’m frightened by what zombie movies, television and video games are doing to the world of screenwriting.

I’m horrified at how this tiny film genre has become scarily representative of the way in which mass audiences seek to be entertained.

As an up-and-coming screenwriter, it’s very off-putting to be welcomed into an industry that predominantly wants to create, as William Froug calls them, “vomit and excrement” stories. I shouldn’t be afraid, right? Because, like, which is scarier: a slow, disintegrating, wannabe beast? Or a protagonist presented with ghosts of authors past, to scare up remnants of his writing career, because he feels he hasn’t suffered enough to be a great artist? (The latter is an old idea for a screenplay. If you want it, you can have it.)

No, I shouldn’t be worried. Because big studios are factories that churn out the most reused, sodden ideas, and people should be pining for original and challenging ones, right? I don’t know.

I sat down with my frequent co-writer, Jeremy E. Kinter, to discuss this and more.

Jeremy is among a group of Albuquerque writers who seek to make films that provoke our current notions of good vs. popular.

We talked about zombies, a genre whose proliferation in movies, TV and video games is almost as infectious as the disease of the damned itself.

JEK: The question is: What has made it so big? It has become so largely prevalent in modern media that it’s to the point of absurdity.

JS: What do you mean?

There’s zombie everything. They did a Pride and Prejudice zombie novel. They rewrote Pride and Prejudice with zombies. There are zombie episodes of sitcoms. Not horror, zombie. It’s literally become “insert zombie here.” Like they’ll probably do zombie Moby Dick.

[Note: Jeremy didn’t know that zombie Moby Dick has already been made. He was very upset at this.]

I think that can be indicative of how it has become its own genre.

The problem is that it’s this mindless thing.

It’s a trite formula. What makes this genre so prevalent right now in our society? My theory is that it’s tapped into the innate human desire to kill other humans without guilt.

And that’s a problem that current zombie stories are lacking to confront. The theory of a desire to kill without guilt, while I completely agree, is the underlying attraction to zombie films, should be completely impossible from any story writer’s standpoint. It’s just not good drama; it’s not a good villain.

It’s simply zombie versus man, which is different than the survival-horror dynamic between other human beings. In other survival-horror stories, it’s an evil that comes to the foreground in certain humans that constructs the conflict, but it’s still human versus human. 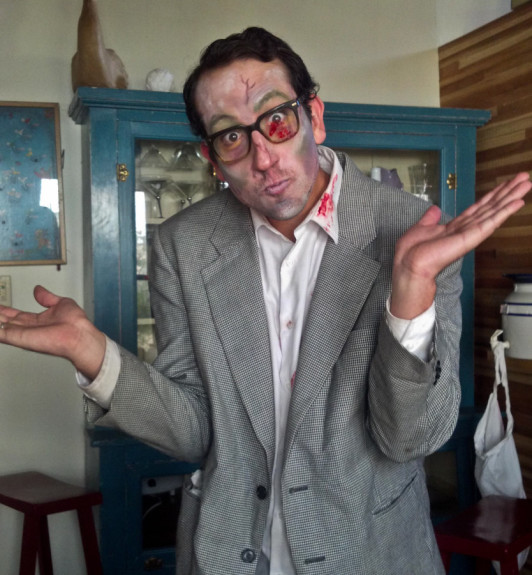 So zombie-dom has essentially removed that spiritual human aspect, and has left behind the shell of the empty human body? Human in form, but without any moral dilemma.

It’s a statement of where we’re at as a society. It’s hard to ignore the violent implications themselves. We do have a violent tendency toward one another that we simply choose to ignore. The reason we’re fascinated with the genre is that we’re susceptible to violence towards one another. It’s okay for you to be violent towards your fellow man in the guise of survival-horror.

To boil this down, it’s safe to say that the genre has forgotten that these beasts need to have a measure of guilt. A measure of something humanistic. Currently, there is nothing about them that is really human at all, besides walking on two feet, and that’s not as frightening as something that is explicably human and chooses to be horrific. The only reason we’re afraid is because these things want to eat our brains.

And this creates the detachment necessary to remove ourselves from a humanistic view of violence. It essentially makes it okay. As a society right now, we are in a state of constant detachment.

This sounds like a side-effect of a lot of films right now. We’ve seen a staggering amount of films that only seek to tap into our most Neanderthal-like desires, rather than challenge them—rather than say something intelligent about human intelligence.

The zombie thing is a complete failure in terms of providing some sort of new lesson to its audience.

It’s failed in providing any moralistic value, content-wise. It’s based in clichés that we see over and over again. It exists because of our desire for substance-free entertainment.

It’s literally eating our brains. The big audiences want to be presented with entertainment that doesn’t challenge them intellectually, that doesn’t remind them that there are big themes and morals in stories, because to watch such stuff over and over might remind us of our faults as humans. Better to place all the blame on the sub-human.

This is not to say that the genre itself is faulted. There are good zombie films out there that have done original things. But right now, it has been popularized in our society to the extent of mindless acceptance. (This is a sub-genre of horror. It is the lowest form of the lowest of genres.)

Zombie films weren’t always so mindless. When they started, the zombie creators had messages in mind. Though you’re not necessarily a fan of recent zombie films, you’re well-schooled in their legacy.

One of the best zombie films, Dawn of the Dead, by George A. Romero, was not only a statement on innate human evil, but a warning to the American public about where we were headed as consumers.

The happiest point of the film is when the survivors take control of a mall.

Who hasn’t dreamt of having an entire mall to himself?

The protagonists take what they want at will, without having to pay for anything. That excites the consumer in the audience member. And then you have these soulless, apathetic beings compounding upon and surrounding the mall, because that’s literally all they can remember: they have the tiniest remembrance of this place providing them with some happiness. And that was genius. Those zombies had risen from the dead, had come up from the grave—versus the zombie now, which is viral and manmade, mostly.

Well that sounds to me like a conscious turn from those who sought to enhance the genre. In other words, they were trying to point us towards “the faults of man are man’s fault,” not witchcraft, not the judgement of some divine being, not Hell being too crowded—but man.

You’ve said that we no longer focus on the origin of the zombie, and that’s fine with me. I see that as progress for a genre. After so many decades of Westerns, it was unimportant to talk about Manifest Destiny, about getting to the west, because we were already there. Zombies shouldn’t have to talk about the origins; we’re already there. I, as a movie-goer, am much more enchanted with where zombies are going, versus where they came from.

But Westerns, in terms of artistry and writing, continue to develop. The zombie-genre has plateaued; it isn’t really giving us anything new. So why is it so popular? The last great zombie horror film was 28 Days Later. The conventions created and utilized in that, like making the zombies more cognitive, faster in nature and quick-witted, have just been repeated in The Walking Dead, I am Legend, World War Z. Why, as a storyteller, would you try to make something that’s so trapped by conventions within conventions, when there’s so much more out there?

You recently wrote a short film script that deals with something you call a super-zombie-vampire-witch. Having read your script, I can say that you’re tapping into the well of the undead, but you take a completely different spin on it.

I try to play on the convention of the unknown, the mystery of the beast. A combination of the monsters created in the horror genre, without being Van Helsing or Cabin in the Woods. But even here, I felt trapped by the conventions of horror.

You wrote a film that attempts to pull the rug out from under the horror and zombie genres. So obviously it’s possible to move ahead in an otherwise plateaued genre. Do you have any suggestions about where to take the zombie genre for those who might have guts to still do so?

I think a good avenue would be to play with and make fun of the clichés themselves, though without being too subversive or meta, which is a fast-approaching pandemic in the horror genre. In other words, a story that doesn’t just use the creature or zombie as a mirror, but something from which your characters can develop.

I think those avenues would be awesome, but will run out quickly. What about taking the zombie and letting him keep an inkling of the human spirit? Maybe have a zombie, a lone zombie, that is fighting so hard to keep from falling fully into the undead. Just like the vampire is tormented with immortality, the zombie could be tormented with an equal bittersweetness: the absence of a conscience.

I think the exploration of this genre is so trite, is so no-good, is so horrible, compared with the other genres of filmdom. Warm Bodies is a zombie film where the creature gains some sort of conscience through love. Zombieland and Shaun of the Dead thoroughly make fun of the genre as a whole. I think that what can be explored has been explored. To continue would be the proverbial beating of a dead body.

I heartily disagree; I don’t think it’s done yet. I think there is lots left to explore. How about how zombies completely reverse Darwin’s theory of survival of the fittest? By that I mean two possible things. The first, how the world can be overrun by such mindless beings (as metaphors of the consumer) and that the intellectual remainders cannot, will not survive. Or the opposite, that we as humans have evolved into a being that is fittest because it cannot regret, and that being will wipe out all other life, which is troublesome?

Sorry, there are already sci-fi versions of that in THX-1138, and Fringe; how in order to become a more intellectual being, you erase those parts of your mind that feel certain things.

Well, as long as something’s popular….