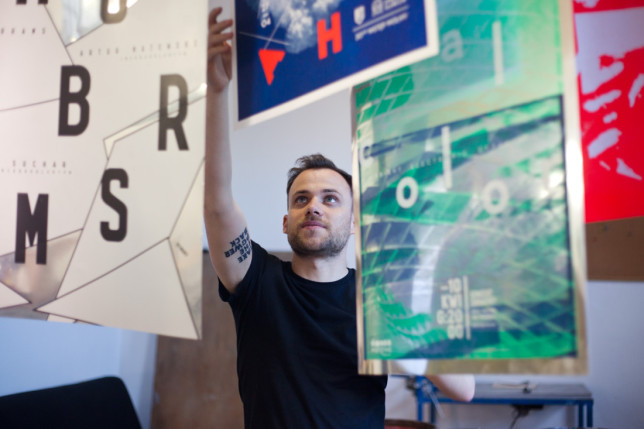 After an unsuccessful attempt to sneak into an abandoned amusement park in Berlin, designer Krzysztof Iwanski and I decided to tone it down…in one of the city’s most famous bars. This time we skipped the fence-hopping and running from guards, and talked about some of his latest projects.

It is very likely that you haven’t heard of Łódź, the city that Iwanski calls home—or maybe you have. In my experience, not many have much knowledge of Poland outside of kielbasa, vodka, and maybe Warsaw.

Iwanski has shown his work in numerous exhibitions around Europe. He’s part of a new generation and has not only found a way to create beautiful work for himself, but that gives back to his native Łódź.

Iwanski wants to bring us all “back to reality.” 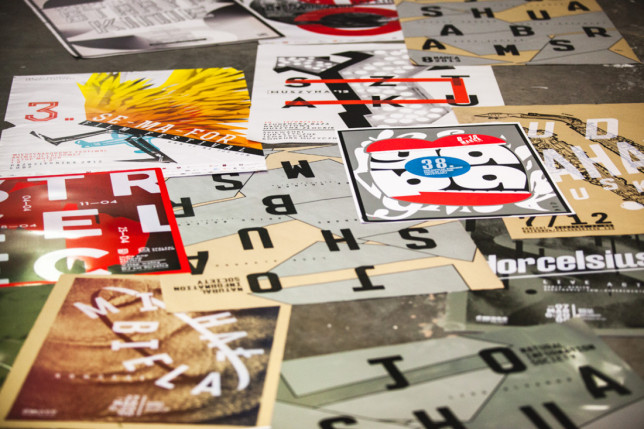 So how did you reach a point where designing posters in particular was something you wanted to pursue seriously?

I just started a project with a café in Łódź and they asked me to make posters for them for all of the events that they were going to have. They were having around five or six events/month, so I started designing posters specifically for them.

What makes the art of designing posters unique?

The poster is not only giving information, but it is also an art form.

I do the design work, but I also print it for them. So in the end they get the ready product and everything is hand-made.

Posters are disappearing right now, especially in Poland. The idea of the poster that is hung up in the street is just dying. What you see usually is something very packaged, something like those very colorful movie posters, and I don’t want to go in this direction. The idea of my product is to make people come back to and to take a second look.

What types of events are you working with usually? 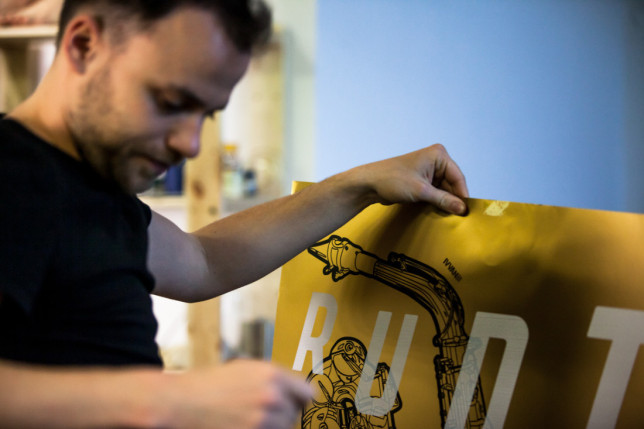 Are both acts based in Łódź?

Yeah, both are based here and it’s also their debut albums. One is called The Washing Machine and the other is called Revlovers, and it’s really interesting because the musicians leave me to my work; they say, “You are the professional, so you do it.” The thing is, I am doing it in the way that I feel that it should look, based on their sound and style, in combination with my own vision.

When you are making these posters, are you trying to reach a more authentic time period, where a poster was closer to a work of art and not just something mass-produced?

I have this feeling that poster-as-an-art-form is becoming less and less authentic. More and more are reserved. More and more, as you said, are mass-produced. I believe that the poster is the most condensed form of communication and can be most abstract in the same time. Fun stuff isn’t it? 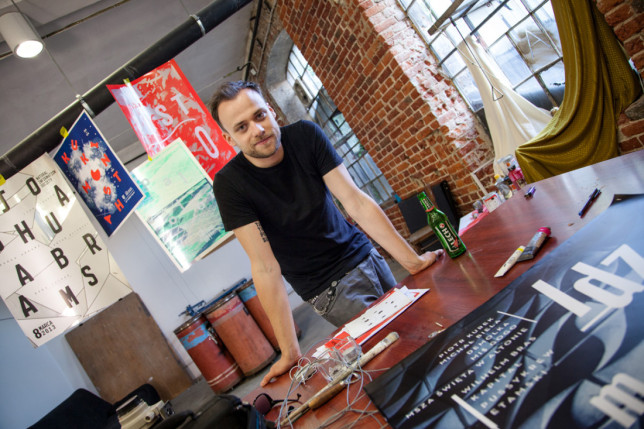 How do you feel that people are responding to your work?

You can tell that people react well to these posters that I am making because when they (the venue) put them in the street, all of them are gone after one day. People have simply just taken them, because they like them. We have to hang them a few times a week because they get stolen after a few hours. It’s a good sign.

Do you think that your work is an important contribution to the aesthetic of a city, and to Łódź in particular?

Do you think that your work is influenced from living in Poland, or is there something else that drives you?

Well, I think it’s me traveling a lot. It doesn’t have to necessarily do with being in Poland. I don’t want to be considered only as a Polish designer. 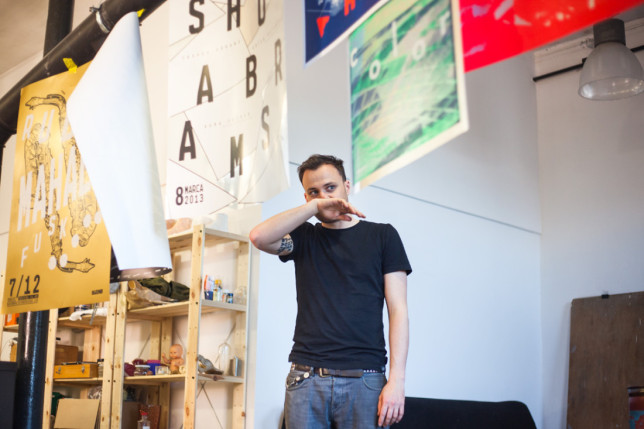 What type of design has really influenced your work?

It’s actually mostly German design, such as Bauhaus, but right now everything is getting very mixed and becoming its own thing.

Is that a good thing that design is becoming mixed, or are you trying to draw back in to something more specialized?

I think it’s great; I mean, why not? The thing is that I always come back to the music; because I feel music and graphics go really well together. For example we went to go see Black Rebel Motorcycle Club in Berlin and the packaging of the CDs and T-shirts were really well designed. You could really tell that someone did it with care.

Yeah, but I think sometimes that people do engage in these half-hearted designs as a way to be ironic. It’s supposed to look bad on purpose, but I think it’s just bad for real.

Yeah, I also think it’s bad. Today, it’s easy for people to believe that they are a designer, since the internet gives you a lot of tools to do it. In our studio, we are trying to use computers as little as possible. Sometimes you have to do it, because it take too much time to do it all by hand, but we do most everything ourselves. Even the printing is done by hand, and you can feel that the product is real. I design the poster and we play with the image on maybe 10 different colors, and sometimes not one is the same.

What do you think is the most important about the hand-made process?

I really think it is a way to come back to reality, and it is something that we have to do. Facebook is fun for communicating, and I guess advertising, but it’s trash. I remember streets being covered in different posters, and now it’s all gone. You no longer see the street poster as something that was done with a reason. 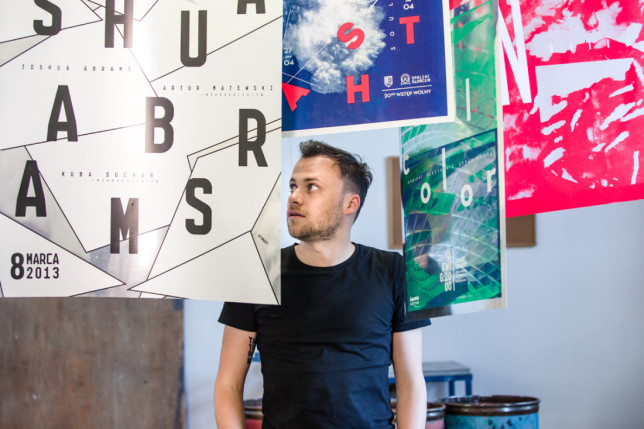 Ideally, what would be your future goal with these posters, when going beyond the project with the venue in Łódź?

I need to see what happens, I don’t have a concrete plan. I know I would be interested in not just working with music, but continuing with events and also exhibitions.

Do you think “going back to reality” is a reaction to Facebook and social media?

Yes, because people eventually get fed up. For example, my work, which is printed on packaging paper, is not looking like an Apple product, but it has something to it. In the end those shiny things are loosing their identity. So again, it’s about breaking away from everyone and everything looking the same. It’s about coming back to reality.