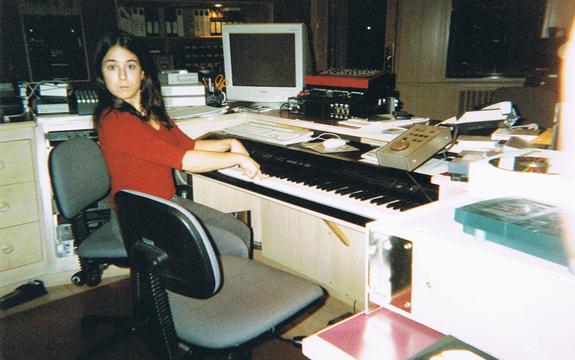 Showing no fear when the boss is not around, circa 2002.

In keeping belatedly with last month’s “fear” theme, and the glow of Halloween still around, I wanted to discuss specifically how my fears have affected my career path. And obviously, how we can all LEARN from this.

I have two fears of trying to reach my goal as Oscar-winning film composer:

I want to address #2 first, because it makes me think about this Jerry Seinfeld quote from his book Sein Language, which puts things in perspective. And then also makes me laugh.

Fear of success is one of the new fears I’ve heard about lately. And I think it’s definitely a sign that we’re running out of fears. A person suffering from fear of success is scraping the bottom of the fear barrel.

Are we going to need AA-type meetings for these people? They get up to the microphone and go, “Hi, my name is Bill and I can’t stand the thought of having a stereo and a cream-colored couch.”

I love this. It’s really true. What exactly are we afraid of? Having more money? Enjoying our jobs? I do understand this fear, because if you actually reach “success” (as you think of it), you are in most cases going to have way more responsibility. And that’s more pressure.

There’s a tiny part of me afraid of making it really big. To me that means I’ve gotten a job on some huge blockbuster movie to score all the music with a live orchestra. What if I fuck that up somehow? What if I go over the allotted budget, and it’s my fault? What if somehow all the equipment explodes and it’s my fault and then I GET FIRED?

In my mind, this is especially bad. Assuming I even had this big gig, I would be scared people would hear I was fired, which could ruin the possibility of future gigs.

And really, fear of success is fear of the unknown. What exactly will I be doing on these gigs? What will the directors and crew be like to work with? How much sleep will I get? Will I snap and murder someone from the lack of it?

I do actually know a lot of the scoring process now, having been a composer’s assistant for many years. So I do partly know what to expect. However, I haven’t actually been the “person in charge of ALL THE MUSIC.” So I do get Seinfeld’s “fear of success,” because if you achieve what you want, you are officially a grown-up, and in-charge, and therefore more likely to screw up things that matter.

The entire time I’ve been in LA, I’ve had a huge fear of being fired.

To me, getting fired is like an opposing army blowing up the bridge on your road to success. And then you have to find some other way around, which is never easy. Since I started, I have depended a lot on my composing assistant jobs; not only financially, but to learn enough to do my own thing on a huge level.

At the point your fear not only encompasses you, but starts affecting others, you need to take a step back and decide what is right.

So fear of being fired from that position was always at the back of my mind. And being younger and “new” in LA, you don’t know any better. I didn’t always take the time to step back and consider “What’s the worst that can happen?” As I’ve mentioned, my sister and I have talked about our careers together a lot, and we decided that the worst that could happen would be that we get fired, run out of money, and have to go home and live with our parents.

Living with the parents itself is not a bad thing. It’s just that we would then consider ourselves complete failures, and would even sprout a NEW fear that everyone else would think so, too. So not only do I have the fear of being fired, but it’s fear of being a failure, and fear of people having low opinions of me. Basically, fear of being fired from everything.

If you have fears like this, how far are you willing to go for them?

Let me explain a bit. Because at one point, I didn’t stand up for myself, for fear of being fired, and I regret it to this day. On my first assistant composing job, the composer was leaving town and tasked me with feeding his dog. Normal, typical assistant work as far as I was concerned. Before he left, he showed me the bottom corners of a couple of cabinets in his kitchen which the dog had chewed up during a thunderstorm, on a night my boss wasn’t home. I immediately felt bad for the dog. He clearly just missed this guy and was scared.

The composer wanted to leave the dog outside while he was gone, so this wouldn’t happen again. It seemed so petty and stupid to me. They were just cabinets! He didn’t want his cabinets ruined? Didn’t he care his dog was stressed out and missed him? Also, this was “winter” in LA, which gets down to about 50 degrees. So I was worried the dog would be cold. However, when my boss leaned in two inches from my face (a hulking 6’5” to my 5’0”) and was like, “DO. NOT. LET. THE. DOG. INTHEHOUSE. WHATSOEVER.” I was terrified. What could I do? I said OK.

It rained that entire weekend, and the dog had to stay out. The first day I came over to feed him, I tried to build a “tent” from patio umbrellas and the table, and whatever else I could find. I thought the dog could at least stay dry. I let him in and tried to warm him up a bit when I was there. Then, almost in tears, I had put him back out in the rain when I left. When I came back to work after the boss returned, the patio was soaked. My dog fort didn’t help.

Why did I not stand up for the dog and deal with my boss’s wrath on Monday?

Because I was afraid I’d get fired. That’s it. Poor dog. I mean, he survived and it was fine, and lived several more years and everything, but this whole incident really bothers me still. On the brighter side, I heard the composer’s mother found out about that and really let him have it. So there. At least he got yelled at.

So I think the lesson learned here is, at the point your fear not only encompasses you, but starts affecting others, you need to take a step back and decide what is right.

As far as the fear of being fired, I can see things from a different angle now.

But I still can’t get totally over it. I recently had a conversation with my lawyer about a job contract. He thought we should ask for a few extras in the contract, besides just a flat rate. And I was like, “NOOOOO don’t do it, I’m totally going to get fired!”

My awesome lawyer had to talk me down a bit: “Look, you have a contract, this is all very normal to negotiate. Are you thinking that if you ask for something that they are going to totally cut off ties and fire you? No. They are just going to say ‘no’ if they don’t want to do it.” He made it sound easy. And he was right, because all that happened was that they denied a couple of our requests with a, “Sorry.”

But I can’t shake this one, because I keep thinking of Back to the Future, Part II—didn’t Crispin Glover not act in Parts II and III because he asked for more money? I mean, how much more did he ask for, does anyone know? What if this becomes me, simply because I tried to up my rate? Anyways, I still have a lot to learn about being unnecessarily scared.

What did everyone dress up as for Halloween? A fear theme? Ha! My husband went as John McClane with a gun taped to his back from Die Hard. I went as the one of the bad guys John McClane shoots; the one he sends down the elevator with a Santa hat and “Now I have a machine gun. Ho-ho-ho” written on his sweatshirt. Mostly because I’m lazy and sweatshirts were $6 at Target.