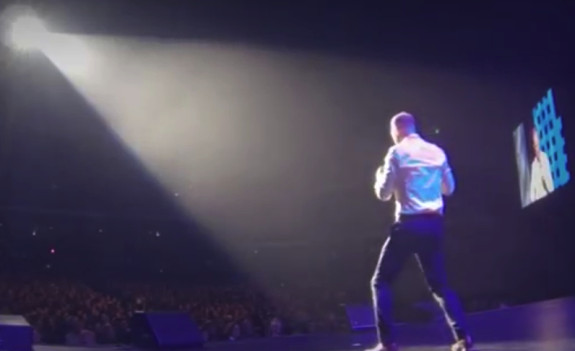 Here I am at the Nokia Theatre, either killing or bombing, I can’t remember.

(A BITTER OLD ACTING TEACHER enters the spotlight on an otherwise dark stage and pauses before an audience of starstruck pupils. For a hushed moment, he scans the crowd with a sneer on his still magnificently handsome face and then at last begins to speak.)

If you’re just starting out in solo performance you’re going to hear a lot of your colleagues telling you to “know your audience.” But how do you actually gain any sort of meaningful knowledge about your audience beyond how many people are there in the seats? I’m guessing you don’t have an advance team to provide you with market research on your next crowd.

You’re an early-stage solo performer. You might not even have a director. You have you and that’s it.

Welcome to my world. I’m here to help you. There’s a trick that stand-up comics use that you can adopt that will help—but I’m warning you right now that it has its limits, which I will illustrate with an example of my own humiliating failure. In advance, you are welcome.

Every comic has a benchmark joke. Benchmark is my term. Others might simply call it a joke or a solid bit or whatever. It’s a punchline, darlings. It’s a bit by which you measure your audience. It might not be the first punchline in your set but it usually comes somewhere near the top. It isn’t necessarily your most complicated, clever, or funny joke. It’s really just a tool.

If you’re any good at your craft you have begun to learn to read the laughter of an audience the way a maestro reads a symphonic score. The audience laughter to your benchmark delivers definitive information about your audience that you need to proceed. Is this a clever crowd or did the double-meaning sail right over their heads? Are they able to respond to sophisticated nuances or do you need to pull out your dick to get a laugh?

A comic who’s quick on her feet can change up her act in any number of ways depending on the reaction to her benchmark bit. Sometimes you can avert disaster. But sometimes you can’t.

I’m not a stand-up comic anymore. These days I stake my claim to semi-obscurity as a playwright/solo performer/monologuist—whatever you want to call me—and I work from a set script that moves from point A to Z and I don’t alter my script based on audience response, but still I put benchmarks in my writing because, well, because I can and so should you.

For many years, the benchmark in my play 7SINS came about five minutes after lights up. In the play I talk about how I was once plucked from the audience at an opera house during a pre-show, educational seminar. I was asked to stand in one place with several other volunteers as visual aids while the speaker explained to the audience the relationship between the characters who would soon be up here singing. Well, unbeknownst to the well-meaning speaker, I had arrived at the theater way too early and was by myself and had nothing else to do, and I am admittedly not much of an opera fan, so I downed a half dozen martinis and then maybe I went back outside and smoked a half a joint behind a big piece of cactus on the edge of the parking lot. Don’t judge. The point is I was relaxed. Very relaxed.

With this as set-up, the joke went something like this:

“So I’m standing on the big stage staring out at the big crowd and the super high stage lights, lost in my imagination, envisioning what my life would be like as a famous opera singer and what sort of tantrums I might throw backstage while the speaker begins addressing the crowd (which, by the way, numbers in the thousands).

‘La Traviata is an opera about love! And the lovers in this opera are Alfredo and Violetta. And you sir,’ he says, pointing to me, ‘because you were our first to volunteer I’m going to allow you to stand in the place of our hero Alfredo.’

‘Okay,’ I say, ‘but just so we’re all clear about this…playing Alfredo would be my second choice.'”

Silence! The bit is not for you. It’s to illustrate a point. I’ve done this bit a thousand times. I’ve done it in fringe festivals, in swimming pools turned into theaters, fancy repertory houses, cruise ships, bars, in front of television cameras, on radio, shitty black boxes and honest-to-god arenas.

I deliver the line and from whatever reaction I get I know exactly how the rest of the evening is going to go.

So now it’s August 2, 2008. I’m standing in front of a sold-out house at the Edinburgh Fringe Festival, giddy with the knowledge that I have managed to fill a theater on my very first performance at this illustrious and storied festival. I have made it.

“Okay, but just so we’re all clear about this,” I say with a heart open and ready to receive the love an audience gives you through their laughter, “but playing Alfredo would be my second choice.”

Silence. Total silence, unless hundreds of confused Scottish people blinking in unison makes an audible noise. If so, I missed it. Then someone dropped a beer bottle which ricocheted down several aisles of stadium seating and eventually rolled right out onto the center of the stage where I stood frozen, holding for the laugh that wasn’t coming, trying not to be distracted by the beer foam spreading across my set. One critic used his entire column to print out his critique in three large words:

(The BITTER, OLD ACTING TEACHER reclines on his chair, lights a cigarette, adjusts the collar of his black turtleneck sweater and blows smoke out over the heads of his rapt but anxious students.)

My benchmark didn’t translate and neither did any of the other dozens of punchlines in that excruciating trainwreck. Why? Because I felt I had passed the test, done enough, graduated with honors. And I was so, so wrong, my little chickens. Had I sought out just one Scottish person to test my tried-and-true material the odds were very good that he or she would have mumbled in a charming, slurry brogue, “I’ve no feckin’ idea what you’re on about.” I could have saved myself $30,000 and a month of humiliation.

Lesson learned? Never presume that you do in fact know your audience. You don’t know anything. More importantly, never take for granted that your material, no matter how many times it has proven itself, will always deliver in every circumstance.

Yes, have tools like benchmarks, but heed my words, mi pajaritos. Every stage rests on ground that is constantly shifting and you can never become complacent. Ever. Here today, bomb tomorrow. Now go. I can’t bear your pity a moment longer. Class dismissed.