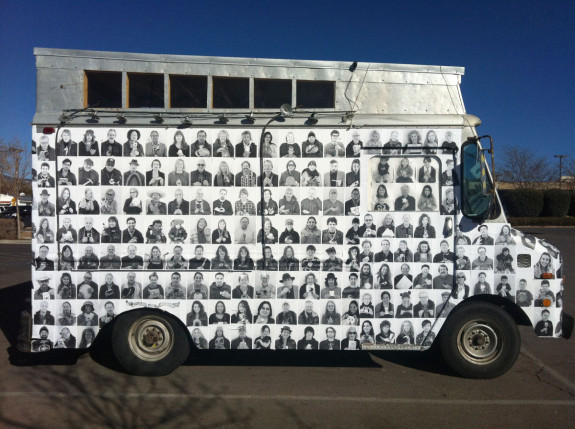 Matthew Chase-Daniel and Jerry Wellman have been operating Axle Contemporary, a mobile gallery on wheels with an HQ in Santa Fe, since 2010. From January 6 to 12, they’ll be engaged in a mobile photo portrait project called E Pluribus Unum to kick off 516 ARTS’ upcoming show Heart of the City, a project that explores different angles on Albuquerque’s urban center and identity.

Eva Avenue: How did you come to be involved with Heart of the City?

Matthew Chase-Daniel/Jerry Wellman: Susanne invited us to do a project. I knew her from many years ago through the Harwood Art Center when Jerry was on the board and she was the director.

We’re going to give one print to the person who sits for the portrait. The other will be wheat-pasted outside the van.

We scheduled time in Albuquerque and coordinated with local businesses, museums and galleries to park at different spaces, two or three places over the course of the day. La Montanita Co-op, Gold Street Caffé, The Grove, in front of 516 ARTS and the Albuquerque Museum. We’re going all over town. Albuquerque is spread out and we’re trying to cover the vital parts of downtown Albuquerque areas where people congregate, and the University and Nob Hill area.

Tell me about your set-up for the mobile portrait studio.

It’s just one digital camera. We have a tripod which will be mounted from the ceiling hanging upside down because it’s easier that way. It’s a Nikon D-7000 we’ll be using and we’ll have a stool with a white backdrop behind the stool. We’ll have natural lighting during the day and light cloth curtains that cover the windows, so we can bring the curtains down when it’s too bright, double the curtains if it’s really bright. As it gets dark we’ll use track lights powered by solar panels on the roof.

What are you going to do with the portraits?

We’re going to give one print to the person who sits for the portrait. The other will be wheat-pasted outside the van. We’ll be printing a third one for a show at 516 ARTS as well. All these prints are done in the mobile gallery studio. So within three minutes of taking the portrait, the person can walk away with it.

It’s similar to a project we did in Santa Fe a year ago which is how we know exactly what to do. In Santa Fe we had 566 people in the project. In Albuquerque we’re hoping for that many or more. This will be a book, and it’ll contain all these wonderful faces. It will be a real document of that time in Albuquerque. And it’s a record in terms of what people are wearing, a good sampling of the people around. We tried to pick locations where it’s not all the same people all the time: Businesspeople, artists, young people, old people, homeless people.

The photographs, as we shoot them—they’re all facing forward in the same position and same height. We’ll take all the photographs and blend those in layers digitally to make one image that has an equal portion of each person. In Santa Fe, each person was 566th of the image; in Santa Fe it looked like a beautiful young Italian woman. This image will print as poster size and we’ll have them in different locations in Albuquerque including 516 ARTS in February, March and April. It will also be in the book.

One other thing, we’ve contacted people in schools and encouraged them to write about the name of the project, E Pluribus Unum, one from many, for them to reflect on what e pluribus unum means for them as a young person living in Albuquerque, in the heart of the city. Depending on what we get back from the students, we’ll put some of those writings in the book as well.

Have you ever seen a project such as yours before?

We’re inspired by the zeitgeist of the wheat-paste phenomena. One of us gets an idea and the other guy says, “That’s good, we’ll add this” and the other guy’s like, “Yeah and we’ll do that” and it just grows. We’re not necessarily that concerned that we’re the first person to ever do something. So there’s someone in Chicago doing a similar project and a French artist named J R, he was printing portraits of people on vinyl and putting them on the roofs of slums in Africa where the roofs were leaky so they’re both portraits and they stop leaks.

Albuquerque residents are encouraged to come for a free portrait, which will also be included in the blended group portrait. Bring an object of personal significance.