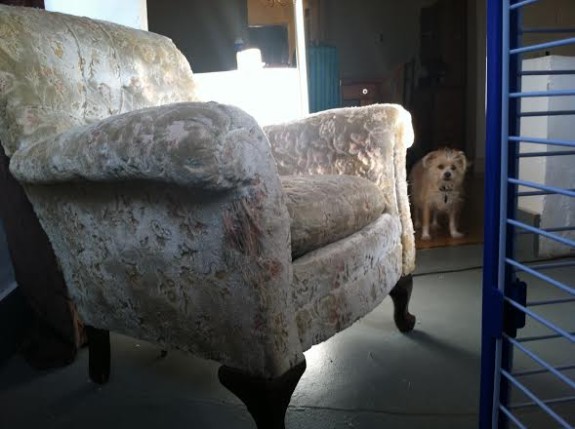 The nicest piece of furniture I ever bought. And Daphne there in the back. Chillin.

In this first year I’ve been self-employed, I started dating somebody amazingly wonderful, adopted a tiny dog, watched my cat slowly destroy the nicest piece of furniture I’ve ever purchased, and bought a soprano Martin ukulele that was made in the 19fucking20s. For reals.

I’ve also been playing music as a duo with the aforementioned amazingly wonderful partner, practicing ukulele, writing songs, paying too much for car repair, booking shows, and playing shows.

Here’s some more stuff I’ve done in my first year in self-employment:

I’ll tell you. Working food service, among other things. As a person who has fostered perhaps an unhealthy amount of resentment for every “traditional” jobby-type-job I’ve held, it’s been a refreshing change this past year to not feel that sense of dread and anxiety—of being completely put-out—when the alarm goes off in the morning. Which is something I only realize when I remember the dark food service days (which is, thankfully, not often).

So, I’ve got to respectfully disagree with Pyragraph’s Shenandoah Davis when she urges, don’t quit your day job. If you’re like me and can’t deal with other people micromanaging you in the pursuit of their dreams, then you should totally quit your day job. Gotta go with Tonya Kay on this one, and say yea to no Plan B! Well, kind of. I mean, babysitting isn’t, you know, something I’m intending to do for a really long time or anything.

A year ago I did something exceptionally bold (if I may say so myself): I quit!

Quit the day job! And ventured forth into an unknown world where my schedule (or at least the money-making parts of the schedule) materialized a week beforehand or the week of, which was kind of terrifying. Babysitting, play show, tutoring, writing, sleep, repeat. It was the repeat part I was most worried about at first. I wanted things to repeat but didn’t know if they would.

But I’m not terrified anymore. Somehow I’ve been paying rent (although I haven’t paid a full year’s worth of self-employed taxes yet, so there’s that other terrifying experience to look forward to, yay). Maybe I should be taking Tonya’s advice and spending more time being like the amazing indie Danielle Ate the Sandwich, who I’ve been using as a sort of career-model. That woman is a social media-posting, ukulele-slinging, toothbrush-hawking, video-making machine.

I’m not going balls-out into Tonya Kay’s no-Plan-B approach, because I’m not sure how possible that is living in this rather tiny town of Albuquerque.

But, I think that it’s liberating being self-employed in lots of little side jobs rather than being employed in a series of life-sucking, soul-draining jobby-job side jobs. I mean, when I think about what my life looked like over a year ago, I feel liberated. Mostly I just feel comfortable in my new routine and don’t spend so much time wallowing in how hard my last day job sucked (but sometimes I do, because it DID suck, hard).

In the meantime, I’m still gonna babysit because I still need to provide furniture for my cat to decimate, right? A girl has her responsibilities.