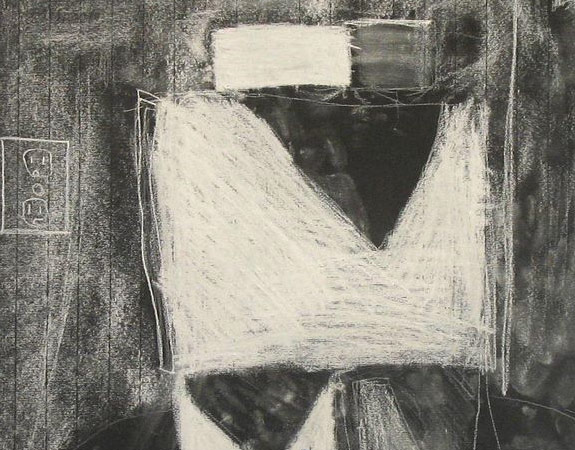 It is the artist’s fate to live in sovereign isolation, whether by physical or emotional means.

I’m going to go ahead and start by calling my previous statement a lot of bullshit, because it is this idea, that there are any sort of truisms about being an artist, that propels my community work. I don’t operate in a brick-and-mortar school, or as part of a charity.

And yet, once a month, I willfully open up my studio and invite students to join me in learning the artistic process, as I see it, for free, in hopes that maybe a few more people in the world will resolve a problem by picking up a pencil to draw.

Why is drawing so important to learn? 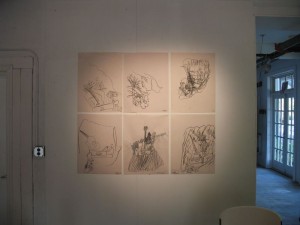 Let’s flash back to kindergarten. OK, maybe seventh grade. You’re in science class and you notice that your science teacher has an unidentified piece of greenery in her teeth, and her breath smells a shade that hasn’t been invented yet. You dream about her that evening, not as a person but as a snapping sawtooth alligator, and that memory seems to haunt you every time you see even an image of an alligator. Something about science is just not that appealing to you anymore.

That process is in fact your brain making sensical associations of the world; a precursor, or call to action, to our inner artist.

So the first thing I teach young people is that if you dream, you can draw. Everyone can draw, and everyone should.

There’s a debate among art school professors: Should all students be required to take drawing classes? Does a Photography or Book Arts major need to know how to draw? We used this discussion topic as a means of dividing the drawers and drawer-nots in school. Drawing is inherently a ritualistic discipline, a practice required by those who believe it to be a source of renewal, explanation and documentation.

For those who don’t, or say they can’t, the idea of drawing is an obstacle which one either works around or avoids altogether, by putting the word “can’t” in front of the word “draw,” when beginning a statement with “I” (it’s complicated).

Part of my goal is to covert the young drawer-nots into drawers. 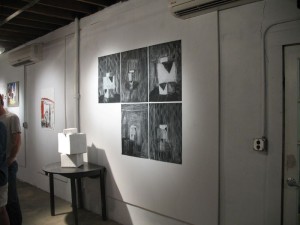 I aim to show those who think there’s nothing to see in their drawings that there’s something there of great value. And most importantly, the most important things, and everything that they have to appreciate about themselves and their world, is right there in front of them on that page.

We can switch to an image of a dog sniffing its own poop, or a depiction of Narcissus, or seeing ourselves in the reflective surface of a Jeff Koons dog. Nobody is that perfect, right?

There’s comedy to be found in the valuing of things, particularly in fancying oneself, but for young people I think it’s an important lesson. Not to think your shit doesn’t stink, but to understand that dogs know one another by scent. They don’t even have to physically see one another to differentiate. That scent is the essence of where you live, how you live, what you eat, and who you’ve been hanging out with.

And who are we to think that because we are people, we don’t possess this same primitive sense of identity in everything we do?

Too often that individuality mumbo-jumbo gets tossed into the trash and we are raised according to typecasts of what we “could” be. And then there’s the journey of finding out what you are, usually determined by discovering what you are not.

How will you make sense of it all if you can’t look back and compare realities?

This afternoon I had a student whose mother admitted on his behalf that he was a perfectionist. And he was. Being already in his teens, there was a slight chance that I could help him understand the marvel in letting go, but this breakthrough wasn’t going to happen in an hour. 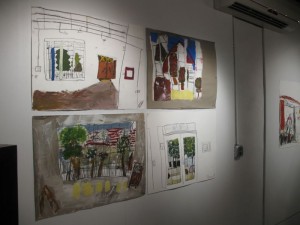 I could tell this kid was going to have impeccable taste as an adult, and unrealistic standards for his first-ever drawing class, because even under his self-imposed stress, he drew like an angel.

Not like a Michelangelo angel, but more like a British pop art angel. I grabbed a book gifted to me by the brilliant Derek Boshier and showed him the drawings, then showed him some drawings by Alphonse Mucha to compare his lines, hopefully demonstrating how the powerfully determined lines he was using were in fact his friends.

That’s how I teach young people to draw.

I try to help each student see that there is no “right” way to draw, only an honest way.

The great thing about being honest and not trying too hard to draw one way or another is that you develop that magical “pow” that makes us love so many artists—individuality and consistency.

I don’t expect everyone I teach to become an artist. The perfectionist’s mother asked if it was common for artists to feel like their work is never good enough. I replied it’s my belief that if you are unable to admit that showing your work to other people doesn’t terrify you a little, you don’t really care about what you’re doing. Fear is part of the process.

It is the reason why so many artists give up, and also what pushes those forward who accept fear for what it is: a combination of chemicals in your brain that balance out all the good feeling you get when you’re doing your work. You “work” your way through this terror till you leave it behind. When it catches up with you, kick it in the nuts and keep going.

Of course I can’t tell kids any of this outright. But I’d like to think that my allusions will lay the necessary foundations for life, in a Mr. Miagi kind of revelation, for a day when one of my students has a pencil, a napkin, and sees something or someone they want to remember.