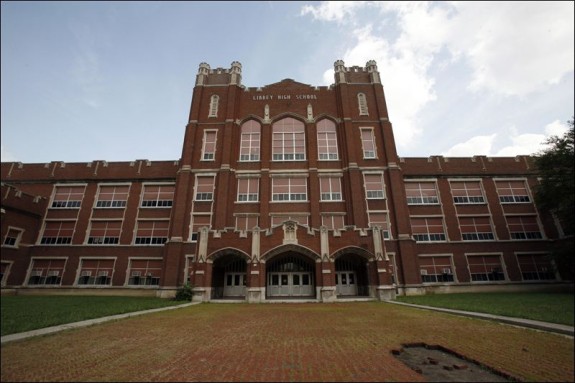 Upon hearing about the “edumacation” theme this month at Pyragraph, I got very excited. When you are younger, you don’t have much to say about what you get taught, because most of the time, you don’t know any better and you don’t know how much there is to learn about the world.

Obviously there are things I’ve learned in school that have been completely beneficial to my career. We’ll get to that in Part 2: The College Years, because the teachings in high school were way too general for me to apply to my career later in life. Although high school may help you train your brain to learn, it doesn’t teach you a lot of stuff you need to know for daily life.

The number one thing I wish they did not teach in high school:

They MUST. STOP. TEACHING THE QUADRATIC EQUATION. It was impressed into our young minds all through high school that this is the MOST IMPORTANT FACT YOU WILL EVER KNOW. YOU WILL USE IT FOREVER. YOU WILL NEED THIS IN COLLEGE. Well, guess what. I like to play a fun little party game now when I go to people’s houses called, “Whoever knows the entire quadratic equation gets a free beer.” It generally takes about 15 minutes and then some genius who has a job in coding can pull it out. Or we have to look it up on our phones. It was the biggest waste of time of all of high school, in my opinion.

There is math I learned that I still use, like fractions (yes, kids), and sometimes I randomly have to figure out a dollar amount where I have to solve for “x,” but that’s about it. I feel like my time could have been better spent helping the homeless or something, but instead, I spent years on math I don’t need.

Six things I wish they did teach in high school:

These have been verified by a panel of high school and college graduates who agreed with me and gave their own opinions on these points, mostly after several beers and bitching.

They used to teach this in our high school and then it disappeared. I don’t know if it’s one of those budget things, like how they are cutting the arts, but this could have been a good one to keep. If I had taken one or two classes on some basic stuff like oil changing, I could have saved my own ass so much time, plus about a billion dollars, at this point. Mechanics love to fuck you over. Plus fixing your own car, to me at least, is really cool.

I did have a little of this in middle school. We made a dustpan and learned to use a bandsaw. Very safe for 13-year-olds. However, this is great stuff. I know some reeeeeallly basic stuff, but my husband, who has a lot of these skills, redid all the baseboards in our house, built our outdoor furniture and the cabinets in the bathroom, and can solder electrical wiring when it breaks. I know this has also saved us about another billion dollars.

Americans seem like the only people who don’t know that many languages. And on top of that, we learn them too late. I took French from as early as they taught it in our school system through college, so I’m pretty fluent. But when I was talking to someone in Europe, they were shocked that we only started teaching kids other languages in middle school. Communication is a big deal. I know that tons of the world knows English. But in this day it would be super-helpful for someone like me to know more languages, so I could communicate with many different people in different countries on other projects.

4. How to balance your checkbook

What matters is not only how to keep track of your checking account and finances, but basic things like how to even write the check. And the fact that just because your checking account balance says one thing, that there might still be, like, five checks that haven’t cashed yet, so you really might have way less money in your account than you think. I think a basic finance class would be great.

Things are way more digital now and I hardly write that many checks anymore. But a basic finances class would help because even if you had a job in high school, chances are you weren’t paying rent or mortgage (or for groceries, if you lived with your parents). These are things you need to know and learn quickly when you are out of the house.

This one was surprising. But I guess it’s a good one, because supposedly, the whole country’s democratic system is built on your ability to do this. So it might be nice to have a little “how-to” when it comes to filling out the voting cards, and maybe a refresher on the local judicial system structures, etc. Chances are, your one vote won’t change which President gets elected. But if people were more involved and even knew what the hell was going on at the local level, this might actually help. And then, you could kick out your corrupt representatives.

I’m just adding this for fun. Because really, I’m always arguing with people that when it comes down to it, it’s not going to be a zombie apocalypse that happens, it’s going to be a series of major riots over water and foot shortages, and once the cell phones go down, we’re fucked.

I once saw on YouTube that you can make water out of air by digging a hole in the ground and putting some cling wrap over it and letting the condensation drip off. What about making the water drinkable? What do you need for that? Will you need a gun? Where will I get food? How long does canned food last? How does a CB radio work? How about how to build a compass when Google Maps goes black? See? I already need this class.

For the record, I was also taught when I was younger that if you do cocaine YOU WILL DIE ON THE SPOT.

A grown-up also told me that if you are naked and lying next to a guy in bed, sperm are strong enough to SWIM ACROSS THE BEDSHEET and impregnate you. So I guess maybe that’s why older people always sleep in separate beds? I don’t know.

Maybe some more classes on free thinking could also be good.

All in all, education is obviously important. You learn how to learn, and you are exposed to books and ideas you wouldn’t normally be exposed to. It just might have cut down on some time and apparently saved me $2B if teachers would have followed my list.