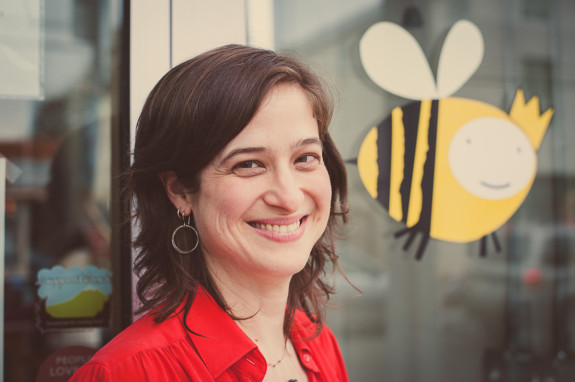 I had a belt. It was pale pink with chrome grommets bifurcating the center. The belt withstood almost 15 years of daily use. It was made by Rebecca Pearcy shortly after she started her company, Queen Bee Creations. I have a purse, also made by Queen Bee. It shows absolutely no signs of giving up on me any time in the foreseeable future. For those of you who like things that are made well, made locally, and last a long time, Portland, Oregon’s Queen Bee is something of a Mecca.

Inga Muscio: Your designs are iconic and have been subsequently hijacked by bitches from Target and Walmart. If you could gather together all of those bitches, tie them down in semi-comfortable chairs and do or say anything you want with or to them (magically, otherworldly, surgically, whatever) and be 100% guaranteed not only full compliance/success, but no consequences suffered by you, what would you do or say to them?

I would become a bitter, unhappy person if I really let it bother me. And I don’t want that for my life.

Rebecca Pearcy: If I could gather the folks together that have copied or imitated my designs, I would use magical powers to gift them with the ability to come up with their own damn ideas. It used to be that when I saw what looked to me like a product uncomfortably similar to one of mine, it would really bother me. But now, I don’t sweat it as much. Occasionally it rankles, but I just force myself to refocus on my own project and ideas and let it roll. There has only been one instance that a large company blatantly copied one of my designs; that got settled out of court.

The rip-off thing I think is just inherent in doing anything fashion-related. It happens all the time. And then there are just ideas that float around that a lot of people grab a hold of. But it is really disturbing when big corporations just copy talented designers’ and artists’ work. Because they have deep pockets and artists usually don’t, the corporation almost always gets away with it. Maddening!

Dang. I knew you were gonna be all nice and decent to them.

I can’t help it—I’m a lover not a fighter. Usually.

You are. It’s true. It’s really evident in the stuff you make. I was just hoping you’d get a smidge medieval on their asses.

I know—that does seem more fun and would make for a better interview! Mostly I just feel sorry for folks who can’t come up with their own ideas.

Your answer is fine. But I don’t think people who hijack creative genius really care about the ability to come up with their own designs. Their genius is in stealing from others, like economic pathogens.

Very well put. It sucks. But honestly, I would become a bitter, unhappy person if I really let it bother me. And I don’t want that for my life. It’s the understanding that I can’t really do anything to change it, so I just keep going back to what I am passionate about and focus on that.

So tell me about the one instance where it was settled out of court. They prolly gag-ordered you, yeah?

What does gag-ordered mean—that I can’t tell anyone what the settlement was?

Yes, that’s what gag-ordered means, only I think I may have taken some grammatical liberty with the term.

Well, I can tell you that it was the leather baby shoes company Robeez that is now owned by Stride Rite/Payless (from what I understand) and they copied my little “Chirp” bird design exactly (not interpreted, but copied) and slapped it on some baby shoes. I was incredibly shocked when I saw my chirp design on the shoes in a store! I took a picture and sent it to my lawyer right away.

Wheeee! I’m glad you took those bitches to court! 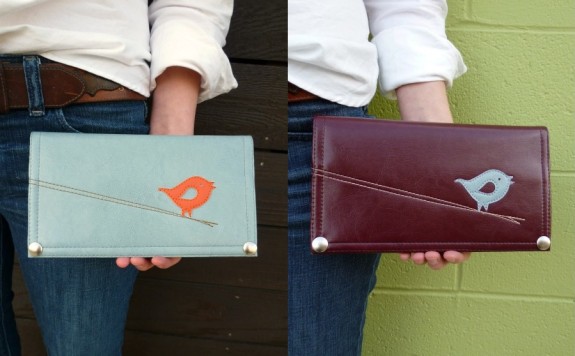 Onto our next burning question: how does it feel to be a star, a beacon, a total inspiration, the Dolly Parton for pretty much everyone who ever sets about making something and selling it?

Well, first of all, it is an incredibly high compliment to be called the Dolly Parton of anything.

I KNEW you would think so! I struggled over which celebrity to pick! My go-to celebrity who is a shining beacon is Dolly Parton and I said to myself, “I bet Rebecca will agree.” Yay!

I can’t really imagine going out and finding a job, so I am pretty hell-bent on making this work. It is totally challenging and I have often wondered what the hell I’m doing, but I persist.

The way I feel is that if I am an inspiration to anyone about anything, then I am doing something good and right! I think that is the ultimate compliment and response to someone seeing what I do—if it inspires them to grab ahold of what they love and do it, and jump off that cliff and give it a try. I also tell them that its a lot of crazy hard work, so you better really love what it is, or you’ll give up.

I know that when I am looking to move in a new direction, I always look for examples of people in the world doing that, and use them as a beacon—and it helps me do it myself. So, if I am that to anyone else, RAD.

But I mean, how do you handle it? I seriously imagine you walking into a craft fair and for the room to just becomes tense with excitement. I KNOW I’m not wrong here.

I handle it by being humble and not assuming anything. I can be pretty shy, so there’s that. But I genuinely like people (generally speaking) and I’m just a person too. I guess that I don’t assume people know what I look like, so I don’t know that they would recognize me. I could be wrong, but I’m happy to remain oblivious in that way. I mean, I design bags. Its not like I’m Dolly Parton or anything! Now I’m thinking I should do a Dolly Parton design of some sort.

You should absolutely do a Dolly design. During her rhinestone cowboy era. 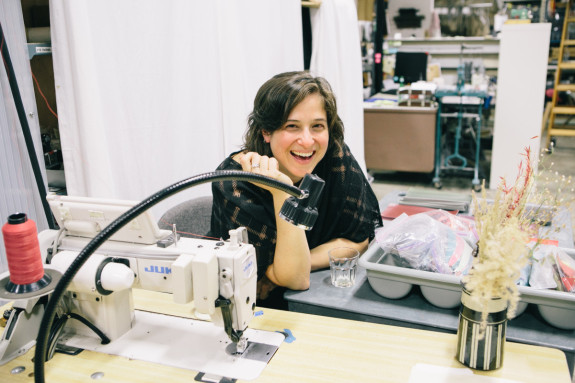 Next question! You are at the helm of a business model which many people see as a way of escaping corporate slavery or unemployment or abject poverty. I’m hoping you’ll discuss the general nature of your creative genius and how you apply that to your business genius. It’s the artist/manufacturer combo that I think is so compelling. And you’ve taken it to the level of having a factory. A fucken factory, Rebecca! How many people do you know who have a factory?

To be totally clear, I don’t really have a factory anymore—I really changed up the biz a couple of years ago, when faced with a really tough crossroads. It worked out beautifully in the sense that my former production manager spun off of Queen Bee and started her own production company. Now, we contract with them to make a lot of our products for us. But we still have some production in-house (because I love the making process, and it is more cost-effective to make some things ourselves) and I can dedicate more of my time to designing new products, and making our great retail shop and website really fabulous.

That being said, I just try to follow my inspiration. First of all, I grew up with two creative and self-employed parents. That laid the groundwork for what I do now. My mom in particular was/is instrumental in forming my artsy craftsy personhood. And because mom and dad were both doing their “thing,” they were able to give me a lot of support to pursue my “thing.” So, that is the foundation for my life.

Beyond that, I just find life and the world to be so incredible and inspiring—there is a book by designer Paul Smith called You Can Find Inspiration in Everything: And If You Can’t, Look Again and that totally resonates with me. When spring rolls around and the flowers start blooming, I almost die from the beauty of it. So, that’s the creative side of it.

The business side came as more of a surprise to me, as I didn’t set out to be a business owner. But I am really driven, and I really like the whole process of design/make/manufacture/sale. It’s a kick to get to see the idea that started off in my head turn into a bag that someone carries around on their body and that I get to see out in the world! And I can’t really imagine going out and finding a job, so I am pretty hell-bent on making this work. It is totally challenging and I have often wondered what the hell I’m doing, but I persist.

Editor’s note: Queen Bee by Rebecca Pearcy graciously partnered with Pyragraph for our Outfox Facebook campaign, and is offering a 20% discount code to folks who sign up for our email newsletter by January 31, 2014. Sign up, get your code and get shopping for beautiful things like this.

Inga Muscio (www.ingalagringa.com) is the author of three books: Cunt: A Declaration of Independence, Autobiography of a Blue-Eyed Devil: My Life and Times in a Racist, Imperialist Society and Rose: Love in Violent Times. She is also a public speaker and lives in the Pacific Northwest.

View all posts by Inga Muscio →