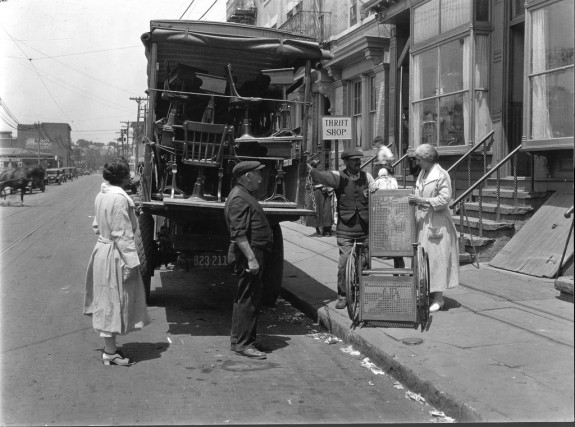 Probably not the kind of thrift shop Macklemore would shop at.

Macklemore and Ryan Lewis: In all likelihood you’ve heard of them.

(Like, a year ago, but I’m slow. My dad even heard about them before I did.) They are the musicians behind this very popular song (and video) about thrift shops and how baller they are which somehow made it to the #1 spot in the country despite their indie (i.e. not signed to a record label) status.

So, I don’t know if there’s actually controversy about their rise to fame, but this NPR article, “The Real Story Of How Macklemore Got ‘Thrift Shop’ To No. 1,” sure paints that picture. (They kind of seem to be only ones who’ve found any controversy in their career choices.)

Basically, NPR’s Planet Money featured this story on the radio (again, almost a year ago) which pretty much accuses Macklemore and Ryan Lewis of perpetuating a lie about their [NPR claims] actually-not-strictly-independent status.

The truth is that Macklemore and Ryan Lewis hired a company to help them get their music into stores. That company, Alternative Distribution Alliance, is an arm of Warner Music Group, one of the most major of the major labels.

Even in today’s world of iTunes and YouTube, you still need the radio to become a superstar, Trust says. So Macklemore and Ryan Lewis hired Warner Music Group to get the band more radio play. That helped propel “Thrift Shop” to No. 1.

Read the rest of the article at NPR.

So, there’s a ton of controversy over the headline and framing of the article (just check out the comment thread). As I was reading through all those vitriolic comments aimed at the poor reporter, Zoe Chace, my initial reaction was: Sheesh, you guys, calm down.

But as I read through the article again I started getting more and more annoyed at NPR. Like, seriously? You’ve gotta paint these guys as liars and creeps for farming out some of the business of running a band?

So, does hiring help make you not-indie? I don’t think so. These dudes are totally indie. Totally. They’re just indie on a scale that we hadn’t yet seen.