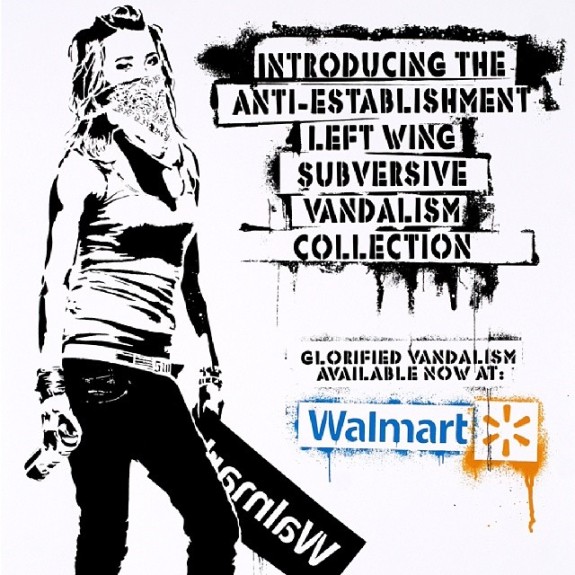 Some large corporations seem to have a habit of stealing artists’ work. Seems like this is the best you could hope for as a ripped-off artist: if you take legal action, hopefully it ends in a settlement complete with non-disclosure agreement banning you from speaking about the case. East Bay Express featured a number of these tales of theft, starting with Eddie Colla, who creates iconic graffiti-style works.

Eddie Colla often gets messages from fans and friends alerting him to advertisements on websites like Etsy and Zazzle offering blatant knockoffs of his art. Sometimes, the Oakland visual artist will reluctantly google a sentence he first wrote in 2009 that is part of one of his most popular works of street art: “If you want to achieve greatness, stop asking for permission.” Those words appear in a piece titled “Ambition,” which also features a woman with a handkerchief over her mouth and a can of spray paint in her hand.

The results of the search are reliably depressing. Colla, who does graffiti-style projects, will invariably find a range of bizarre rip-offs from obscure companies and websites that may be profiting from his design — with T-shirts, posters, prints, and more. They did not ask for permission. Twice, in recent years, he has even discovered other artists presenting his work as their own at galleries.

He thought he had seen it all, but a Facebook message he received in November was truly shocking: Walmart was selling an exact replica of “Ambition” — and attributing it to Banksy, the celebrity street artist.