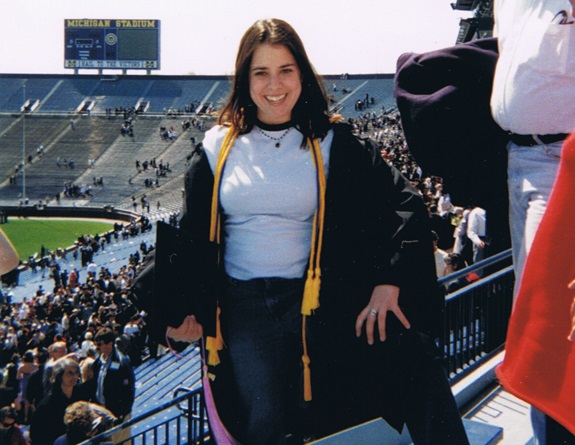 Graduation Day. Ready to go out and make billions of dollars.

Following my seven missing or unnecessary lessons from high school, it’s time to look at college. My experience may not resonate with everyone. But for me, going to college, and after two years of general education, getting admitted to the Performing Arts Technology degree program at the Music School at University of Michigan, was a huge deal.

Reasons why I would not be here today without college:

1. “You can learn everything you learned in school on the internet, and you would have saved yourself thousands of dollars” wasn’t true back then.

Well, let me tell you my “We used to walk five miles in the snow” story about the kind of Internet I had then. When I went to college, people weren’t really using the Internet like they do today. I didn’t even have an email address until I went to Michigan. We used to mess around in AOL chatrooms (remember those?) on our older computer at home, but that was pretty much the extent of it. I know there is a lot you can learn online nowadays.

You could probably learn a whole career online. Not, like, how to be a doctor, but there are so many tutorials and references online for music that it’s mind-boggling. The thing is, if I had chosen not to go to college and tried to learn myself, I wouldn’t have known where the hell to begin.

Part of the education process in my field was learning what I needed to know for my composing career. And if you don’t even know what you need to know, how are you going to search for it? So although the internet is a myriad of resources, I could not have learned what I needed to know without teachers showing and telling me some of the important elements of composing and producing music.

2. College offered mega opportunities for hands-on practice and generating your own art.

In one class, my favorite teacher had a syllabus, a plan, and taught us tons of facts specifically about film scoring and sound effects, but he also stood back a lot and let us explore these things on our own. There would be projects that you had to do for grades, but you could do your own thing within those parameters.

The ability to practice and try out the skills you were told about on paper or in a class was a big deal. And then receiving feedback was always helpful from someone who knew more than you—or, if the class was more of a roundtable setting, you could get feedback from other musicians too. Graded tests and projects were required, but the really fun stuff—like redoing the entire score, sound effects, and dialogue for a scene in Star Trek—really taught me a lot. This is another one of those things I wouldn’t learn at home by myself. The practice was hugely helpful.

3. The resources you could use at college to learn were INCLUDED IN TUITION.

As I look back now, I sort of wish I had taken more advantage of some of the stuff at school. I mean, as long as you signed up for a time slot, you could use any of the studios for your personal projects, or to work on homework. Or you could go in anytime to “2057”: the room with rows of computers set up with music software and gear. I had none of this stuff at home.

There were thousands of dollars, maybe millions, put into software and computers and stuff for Music Technology students to use. I learned to write on the software called Studio Vision Pro (long since defunct, but had the same concepts as Logic or Digital Performer). They had Pro Tools in several places, which was amazing.

There is always the possibility of going old school and writing music with a pen and paper. (I heard John Williams still does this. I don’t know if that is a fact, though.) I wouldn’t even have known where to begin with that because I had no orchestration skills. I knew people were starting to use computers to compose for film and I wanted to learn how to do that.

I wouldn’t have known what I even needed to start these big computer-based projects without school. Trying to buy all the gear you need by yourself is a pain in the ass, especially at that age, when no one has any money. Having studio rooms where I could learn how to use it first, and then deciding exactly what I needed to buy later was super-awesome.

4. In my particular music program, we learned tons of different things.

Even before I got accepted into the program, I was in the “Literature, Science and Arts” (General Admissions) program. I was taking French, some random poetry classes, Criminology, etc.

This was crazy. Where else can you line up your schedule so that, although you have to take the credits required to graduate, you can learn so many topics? As I’ve said, learning multiple skills in the music program was a huge plus. But I also really loved taking random classes and learning about things that I probably would never have a chance to again, like Criminology.

5. In college, you are stuck with people just like you.

They all come from different backgrounds and have different skills, and the possibilities to collaborate are insane. This was super-cool because you could see other people’s personal projects and get inspired. Pretty much everyone in the program was better at sound recording and engineering than I was. So having people around that knew more than me was awesome, because you could always ask for help and someone would know how to fix whatever the issue was you were having.

A lot of the students in the program are still my friends today. Not all of them live near me, but I have worked with a couple of them on a few things, which is really cool.

We since have grown and learned a lot, and are even now able to share more music information with each other that we didn’t know then. So not only are you surrounded by other minds that you can learn from and collaborate with, but you develop relationships for life.

6. And of course: college basically teaches you to be a grown-up.

I’ve always been a pretty independent person, but a lot of people who haven’t been away from home before are basically thrown into a pool and are told to swim. So you do it. You learn how to take care of yourself. You learn how to balance your schedule. You learn what is needed for work and how much time you have left over to party.

If you didn’t go to school knowing what you wanted to get out of it, you learn what you want and take that with you in life and on through your career.

There’s still people watching over you: the dorm RAs; those certain teachers who actually take attendance (why? WHY? I’m paying for this class!), your parents, who probably have to send you money if you aren’t on a scholarship. But it’s not like you are 12 years old anymore and living at home. It’s a big transition to living your life completely on your own, and it teaches you a lot about how to do that.

For me, it was a big deal to go to college.

It would have been hard to get to the point where I’m at on my own (and with such limited Internet at the time!). For some people, this may not be the answer, but I think if you can swing it, the formal education you can get from a college could be instrumental to your career.