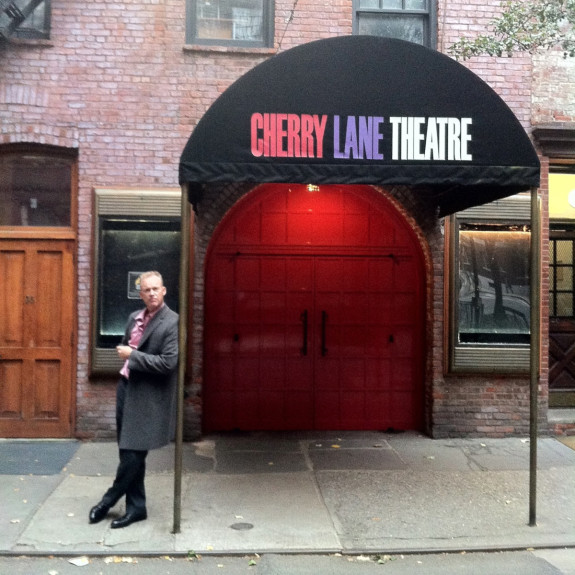 I sat on a bare, New York City stage on a recent, cold November morning listening to the great acting teacher Deb Margolin.

“People come to the theater to stare at other people,” she said, “and we are the people they come to stare at.”

Nineteen simple words strong and true enough to bear the weight of all the theater, plays, players and playwrights in the world. But what exactly is it they want to see when they’re staring at us that moved them to pay much more for their ticket than they would have paid to see a movie?

What experience can live theater create that movies or television cannot?

Other than being live, there’s still a barrier of artificiality present that our collective suspension of disbelief can diminish, but never fully erase.

Yes, you jump when Sweeney Todd slits the throats of his victims. But you know the blood is fake and it’s a Wednesday matinee, so you already have in the back of your mind that the actors will be killing each other again in a few hours.

There’s the sense of danger—the sense that something might go wrong in a live performance—that sets our adrenaline to humming, but how often does that actually happen? Not often enough. There’s the thrill of hearing a beautiful voice soaring above a live orchestra (whether amplified or not). That’s a good one. But what really touches our hearts and makes us feel not like a fly on the wall, but captivated by the moment of spellbinding theatrical magic?

All those tricks and many more will help create a sense of intimacy, but only if the intimacy is already present in the writing. It has to be in the words. And then, what isn’t written, but is present, has to come from your body.

It’s moments of intimacy. It’s Romeo reaching up the balcony to touch the hand of Juliet. It’s Jessie and Amanda in ‘Night, Mother quietly folding clothes just after Jessie has told Thelma that she’s going to kill herself in an hour. It’s Sam and Avery sweeping the movie theater floor, talking about nothing in particular, reflecting the mundane reality of our lives so harshly it burns, in The Flick. It’s Elyot and Amanda gasping for breath and gazing at each other right after their violent tangle in the second act of Private Lives.

These are moments of live intimacy that only theater can create. They make you feel so present in someone else’s private moment that you feel like you shouldn’t be there. Yet you can’t tear your eyes away.

Now imagine those scenes played by only one actor.

This is the challenge faced by the solo performer. How do you create moments of searing intimacy between two characters when you are the only actor on stage? In my decade-plus work as a solo performer on stage, in front of a camera, and on radio, this has become my defining challenge. I don’t have the simple answer, sorry. That’s why I’m the $2 acting coach instead of the big-time $3. But I can point you in the right direction.

How do you create that intimacy between two characters on stage, with only one actor? What’s the first thing that jumps into your mind? Dim the lights? Wrong. Create an intimate set? Wrong. Light a candle? Wrong. Add the sound of a piano or violin? Stop!

All those tricks and many more will help create a sense of intimacy, but only if the intimacy is already present in the writing. It has to be in the words. And then, what isn’t written, but is present, has to come from your body.

External elements like sound and lighting and sets alone will never get you where you want to go. If you’ve ever tried to take your solo work out of your home base and into the world you know that you’re likely to perform in venues that are totally unsuited for theater.

In DC, I performed in a college seminar room with two lighting choices: everything on or everything off. In Montreal, I performed in a swimming pool adapted into a theater. In Los Angeles, my story about two people locked in a shark cage—surrounded by sharks as one of them quickly ran out of air—was performed in the cavernous 4,000-seat Nokia Theater. I could barely get people to look at me, and not the enormous, distracting JumboTrons on either side of the stage.

What to do? Go back to the beginning.

Always go back to the beginning.

Rule Number 1: you have to let the audience know very clearly what it is that each character wants. This is the number one rule in every piece of theater, but never so overwhelmingly important as when one actor is playing multiple characters. It can never be repeated enough. Make it a mantra. You have to let your audience know what your characters want. You cannot engage their imagination if they don’t understand what the characters want.

We have two characters desperately wanting to kiss and when they do the outcome will be sexy and scary and tragic. What could be hotter? You’re halfway to Broadway, baby! But right now you have no lights, no set, no music—you only have you. So what do you do? The right answer is, as most right answers are, right in front of you, or even literally within you.

Now feel the body of your character. Tell us or show us the nerves. Show us where the tension is. Is it in Character A’s trembling hands as she applies her poison lipstick? Is it in Character B as she forces herself to lean away from Character A and purse her lips, though she wants nothing more than to fling herself into an open-mouth embrace? Tell us what the light is like. Have they met in a dark place, perhaps in the vestibule of an old cathedral that forces them to come closer together? Does Character A feel a twinge of guilt when she sees the flickering candles behind her victim creating a halo around her head? Say it. Move in.

Remember, the audience came to stare at you and now it’s up to you to make them not just see you, but feel you.

Is the light so dim that it’s forcing them to come closer together to see each other and of course eventually kiss? Describe it. What does it smell like it in there? Can Character B smell Character A’s Britney Spears perfume over the musty ancient stones? Does it draw her in closer? Do it. Are they forced to whisper with their lips just a centimeter apart? Show us. Do hands brush against the fabric of the other character’s clothes? Describe the warmth of the cashmere. What is the taste of the poison lipstick? Is it like a lime Jolly Rancher? Let the audience savor its sour deliciousness by describing the taste. Mmmm, I want one!

Can you hear a pin drop in the theater?

No, because the audience is so fucking into your play that no one is playing with pins!

You had it in you all the time. It isn’t rocket science. You’re not reinventing the wheel. You’re just using what you already now to be true but you were too close to it to see it. Remember, they came to stare at you and now it’s up to you to make them not just see you, but feel you. Step back. Observe. Use your senses: touch, taste, sight, feel and sound.

Got it? Okay, meet me in St. Bethany’s behind the confessional at 1pm. There’s something I need to give you. Class dismissed.

Author’s note: This essay owes a debt of gratitude to Stacey D’Erasmo’s wonderful book The Art of Intimacy. It’s an exploration of intimacy on the page for fiction writers but its enormous wisdom crosses over to playwrights and solo performers in numerous ways.