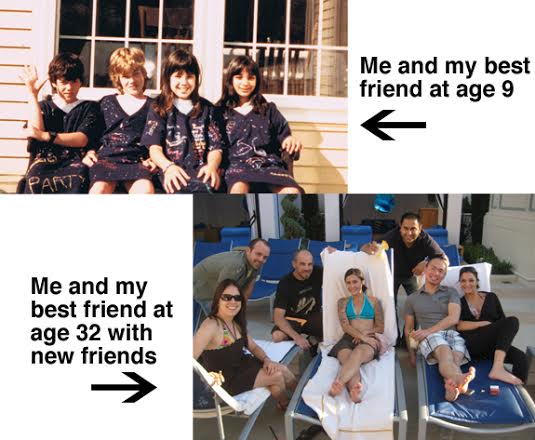 I recently read this article at The New York Times, which someone had posted on Facebook. It thoroughly pissed me off. Why?

They basically tell you to resign yourself to not making new friends after 30.

That’s it. The whole tone of the article was such a downer. I mean, they had some good points, too, but this is my blog and I’m going to tell you why they are wrong.

I think this subject is quite important because it can apply to another area of your life: that time period when you move to another city, for reasons such as…your career. How will you make friends? How does a person do this after a certain age? Since I’m totally on a roll quoting Seinfeld, here is what he says about friendship in Sein Language:

When you’re in your thirties, it’s very hard to make a new friend. Whatever the group is that you’ve got now, that’s who you’re going with…. Of course when you’re a kid, you can be friends with anybody. There were almost no qualifications. If someone’s in front of my house now, that’s my friend, they’re my friend, that’s it. “Are you a grown-up? No? Great, c’mon in! Let’s jump up and down on my bed!” And if you have anything in common at all—”You like cherry soda? I like cherry soda. We’ll be best friends!”

You can play with anyone on a playground or at a campground or wherever you end up when you’re young. Standards are lower then. You get older, and you recognize where people are full of shit. You recognize that you’re no longer interested in putting up with it. It took me till about age 30 to realize someone I had a great relationship with when I was younger was actually a shitty friend.

I think it took me seeing it through a story my best friend told me. The other girl, in this story, was putting other things (i.e. shopping) ahead of their friendship. I realized that she’d been like that all along, and that’s the kind of thing you weed out when you are older. We don’t have time for flaky people now. We don’t have time for a lot of stuff.

However, that doesn’t mean you won’t find any good friends EVER AGAIN.

I don’t think it’s SO DIFFERENT making new friends when you are older that you basically have to FUCKING GIVE UP.

Okay, what kind of depressed-writer-sitting-alone-in-a-dark-room-with-no-friends bullshit is this? Why do I have to resolve myself to this? Is this the whole problem? That people have all decided that they won’t be able to find new friends after a certain age, and that they’ve been told so many times they won’t, that they just aren’t going to try anymore? Just keep it at some “meh” level?

This is an interesting one. I do and don’t understand it. Life? What does your life include? Are friends and relationships not part of life? Are they not important? I got into a good discussion with an old high school friend about this in the article’s Facebook feed:

Jen: I have a good conclusion to this article, in one sentence: Make an effort. A lot of those stories quoted were like, “Oh once the job was over, I didn’t hang out with them.” You gotta fucking call someone and try. I have so many thoughts on this I’m going to write a blog about it.

Keith Avery: You are very right, but it’s not even about that, usually…priorities change, life gets in the way. Where does the time go? Workaholics u know. And then there is dilution, too many people to keep in touch with, including the old.

Jen: I get it, I totally do. I guess my question would be, if you are saying your priorities change and friendship is not one of them, then why are they complaining in the article? If you are working a lot and your priority is sleep, then sleep. But if you don’t want to and you want to spend the time hanging out, then do that. I JUST SOLVED EVERYONE’S PROBLEMS.

Keith: I can’t argue with that. If I decide to work until 6am on a Friday then I can’t expect to earn points in the buddy department. I guess I need some fellow workaholic friends. Game jams anyone? In this kind of situation, maybe the complaint isn’t the dynamics of friendships but the hardships of earning money and how that can interfere with what really matters in life…but again it’s everyone’s choice to divvy up priorities. Yea, who needs sleep.

I totally get what he’s saying.

If you have a job which requires basically all of your time and energy, the last thing you are going to want to do is go out, or even make an effort to groom yourself. But why does this entire article focus on people having drinks, going to cocktail parties, a thing YOU, the reader, are no longer interested in, or can’t handle doing?

It’s a HUGE effort to make and keep new friends if you can’t leave your house after a 15-hour work day, I’m not saying otherwise. But if you have some time, you don’t need a fucking cocktail party to keep a friendship alive.

Is this the only place people go, according to The New York Times? Cocktail parties?

Why don’t you go to your friend’s house? Don’t they have enough room for a couch and TV in New York apartments? Bring your fucking Snuggie and watch “The Walking Dead” and bond over some gore and wine.

This applies to people with kids, too. I’m in that stage now where people are birthing all over the place. I totally understand it’s hard and you don’t see them as much as you used to because they are raising humans. Sometimes it’s hard to see these friends, like, ever.

This is why I’m not having children. That life is too hard for me. I just spilled my whiskey on the floor here. How the hell am I going to deal with cleaning up 18 years of someone else doing that? I can’t even keep up with my own shit.

But if your friends with kids can’t go out, go sit on the couch with them. Real friends are friends no matter where you are sitting.

“But often, people realize how much they have neglected to restock their pool of friends only when they encounter a big life event, like a move, say, or a divorce.”

This just means you’re an asshole.

If you realize after a big life event that, then and only then, you appreciate who your friends are, you are a shitty friend. You clearly put in zero effort, and what do you get in the end? What you put in. Friendship is a two-way street. You have to try. There’s no excuse these days, with social media.

I’ve given this advice before, about succeeding in your career. I have a great friend I met only a few years ago, who lives in Michigan three weeks out of each month. It’s hard to get to see her because she’s always traveling for work. So what do we do? We try.

We wanted to hang in October, but it wasn’t going to work out. We emailed back and forth and the next time we were both mutually free and she was in town was November 14th. We scheduled it, made it happen, and hung out. The NY Times author even says at the end of the article that the next time he can hang out with his friend is in three months. If that is someone worth keeping, it’s worth waiting.

It takes me at least six phone calls with my oldest best friend from third grade to get her to call me back. She’s a doctor, with two children, and I get that that’s her life now. But we both make the effort. If we are in town, we see each other. When she’s not carrying 70 lbs. of child around, or working, she calls me.

For us, that works out.

I have good tips to help you make new friends.

Looking back, the best way I made friends was through group workout stuff. (I do have other options for people who don’t want to be healthy.)

I joined the Hollywood YMCA. I met three nice girls in a dance class. Even though we don’t see each other that often, I count them as the kind of friends you can call after a divorce, a move, a break-up, a hospital visit, etc. I met some other good people through Parkour class at the LA School of Gymnastics. I met other great people while taking dance classes in Pasadena. My sister was on an Ultimate Frisbee team with a guy she ended up dating for several years. (Weirdly enough, also on her team was Duckie, from Pretty in Pink.) I’ve been to random Film/Music/Speaker events with meet-and-greets afterwards, where you can talk to other composers.

I recently have also met some cool people from one of my side jobs.

You may not give a crap about people you see in any of these scenarios, and maybe your new BFF may be at some bar somewhere you haven’t gone yet. You can meet people unexpectedly later on, who really make a difference in your life. Don’t let anyone, including The New York Times, tell you that you can’t make new best friends after your 20s. Sometimes, the ones you do meet later are the ones that you keep forever.