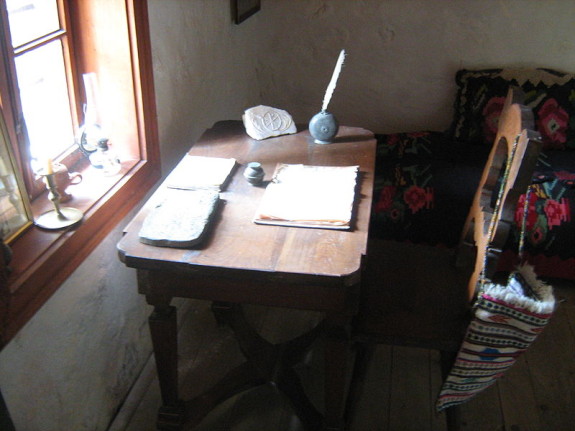 In September, I had 44 meetings on how to create meaning.

Each student entered my office in Deperno 121 with their narrative personal essay, sat, looked up expectantly, and asked how to improve what it is they already put on the page. Each told a story, a real story, something that happened, something they felt was worth telling, something that revealed a piece of their interior, their drive, their talent, their gifts, their mistakes, the way they see the world: a unique lens. What each student did was tell a true story and in the revision process I asked them to then do the hard work of showing a reader that this true story is meaningful, and impactful, without being manipulative.

Writers new to nonfiction often have a problem with pathos, i.e. emotion-driven/void essays. Pathos problems include the essay that relies so much on the writer’s emotional ties to the events on the page that the reader feels they’ve encroached on a private piece of writing; the essay that drips with sentimentality and pulls each obvious string in a reader; and the essay that is so void of emotion it reads like an action script, where events unfold but characters don’t react or reflect and the reader feels no impact. The new writer tends to lean on the idea that because the story is “true” or “real” it is not only worth telling, but by simply committing this “true story” to the page there is an immediate bond with a reader.

Critic and editor B.J. Hollars begs the question, “How do we tell our tales in a manner that matters to others?”

This is often the fear with creative nonfiction, that stories being told aren’t able to connect to a reader in a way that really truly matters, or worse, they alienate a reader imploring their sympathy.

Hollars states the problem frankly: “Most of the essays that I have read deal with similar narratives and themes and have run on mostly sentimentality. That is, the pathos of the piece is what is carrying the writer’s entire essay, and after we’re done reading we feel less connection to the writer’s narrative/human condition in the world, and more of a connection to emotions and emotive understanding.”

I think this is the real challenge any personal essayist faces with everything they ever write, or attempt to write. We ask our students not only to convey a truth about themselves, but a universal truth, which then pierces a reader, and through the articulation of those two connected things they create meaning.

At the beginning of the semester I wrote on the chalkboard the words “self” and “world” with arrows running between. I told students that essays are intrinsically always about self and world and the relationship between something particular and something universal.

Images are also one of the most important elements in writing. I always tell my students, even when I’m teaching about music writing, “You have to give me an image so I understand what the music sounds like.”

To be particular, three nights before I moved to Utica, New York I sat deep in the back of a cave in the Sandía mountain range, on the edge of Albuquerque, New Mexico at 2:30 in the morning, drinking a beer in pitch black with a man I’d been seeing for about a month, Mike.

We had driven all the way out to the range in my truck and walked the half-mile trail in the dark holding hands by the light of his cell phone and climbed the tourist stairs into the cave, and then climbed over the partition to crawl about a mile deep to get to the absolute darkest point of the cave, just because I’d never been. In the dark of the cave I couldn’t see anything in front of me, not my own hands that held the beer we had carried, nor Mike, beside me, and the cave was damp and cool and dusty and we only spoke occasionally, breaking the darkness.

“I can’t imagine my life in Utica,” I offered.

He’d taken me to that place because of a dream I’d told him about a week earlier: us in a cave, him taking my hands and putting them over the ancient paintings inside and slowly interpreting for me the meaning of each image.

In the back of the cave I felt the tingling of my future stretching out before me familiar and foreign, like when you momentarily see a face in a crowd you recognize only to realize you never new it. Mike, in the cave, who in my dream gave me meaning, wasn’t going to be a part of my life in Utica, and in that moment he and I both knew it.

In my office my students are confused when I tell them: “Create meaning,” so I give them tools:

Images are a coded language that must be interpreted, and the more precise the image, the less puzzling an individual has to do to interpret. Images are also situational, a red check mark means something different on milk carton than on a phone. Therefore, images have what poets call “connotative meaning” (i.e. depending on the situation it is presented in, an image can be interpreted differently, much like a word placed in a sentence). Images are also one of the most important elements in writing. I always tell my students, even when I’m teaching about music writing, “You have to give me an image so I understand what the music sounds like.”

Janet Burroway makes her case for imagistic writing scientifically: “But it is sense impressions that make writing vivid, and there is a physiological reason for this. Information taken in through the five senses is processed in the limbic system of the brain, which generates sensuous responses in the body: hear rate, blood/oxygen flow, muscle reactions, and so in order to have an effect on your reader’s emotions, you must literally get into the limbic system, which you can only do through the senses.”

Here, Burroway makes a direct connection between a reader’s emotional responses and imagery. By using images and mainly central images, I believe a writer of nonfiction can write around this overindulgent pathos problem and deepen an essay that feels void of emotion.

The problem of pathos is common in nonfiction, but it can be addressed through the purposeful usage of image, which can also become an organizing principle for less structured work. Work that feels overly reliant on emotions probably hasn’t yet found its universality, its essay, and remains stuck in the personal aspect of personal essay. Image can catapult the personal experience into essay.

Reflecting upon past action is the very stuff of meaning.

I asked students to write down what their relationship to their memory/past selves were. One spoke up to start our discussion by saying, “Without my memory, I’m not me. It makes me who I am.” While it seems like a simplistic concept, it’s the very heart of personal essay. The moment in the cave is how I remember that relationship: adventurous, romantic. I remember being scared when we walked passed the shrine for the woman that went missing by the cave, all the trinkets hanging in the boughs of the trees for her, and the graffiti on the rock face in black spray paint that simply said: “Where is Carla?”

Sandía Man Cave got its name from famous Anthropologist Frank Hibben, who as a graduate student at the University of New Mexico discovered the cave and came up with a theory that the oldest specimen of man once lived there. This turned out to be a false theory, much of the evidence behind it faked by Hibben himself. Hibben wanted a good story, so he created one.

While we sat in the back of the cave, the history of Hibben’s false theory hung around us, and the mystery of Carla’s disappearance remained unsolved, but the ending to our relationship was already being written in our dusty footprints as we crawled out of the cave in the dark.

I drove from Albuquerque to Utica.

When I got to Tenessee I realized my glove box still had the outline of the Mike’s dusty knee prints from the night we went to the cave. At a gas station I wiped them away with a fast-food napkin dipped in a cup of melted ice.

It rained almost every day after I arrived in Utica this summer. The rain made things a deep green, a kind that doesn’t exist in the southwest. Sometimes I woke up to the rain and looking at the grey streaks on the windowpane I felt quenched after such a long time in the desert.

One day in October a student came to my office and told me she wasn’t sure how to tell her story in a way that would make other people want to read it. I told her that the very fact that she had this fear meant she was thinking in the right ways to get her story into the world.

After 44 meetings on creating meaning at Utica College I still search for it in my own work, and in the work of others, because it’s important. Because once meaning is made, it stands, and takes on another form, connection, which allows individuals to truly see into one another. As a writing teacher I am in the business of helping people see their voices, their lives, their experiences as meaningful, as conduits for connection, and I’m thankful for that.

Suzanne’s essay was originally published in Utica College’s The Spectator.