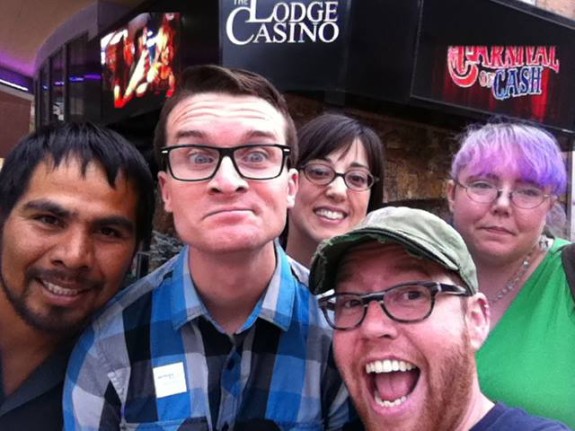 When I graduated high school, there was only one thing I knew for sure: I had to get the hell out of my home town.

Not that it was the worst place in the world, but I knew it wasn’t for me. To justify my thirst for exploration, I made plans to attend some sort of college, any college that was in a city. I spent six months at the Brown Institute in Minneapolis, a trade school that was within my budget but didn’t really teach me what I wanted to learn. I dropped out and tried to get into the New York Film Academy, a great school that was way too expensive. Eventually I settled in at Columbia College Chicago, a happy medium. Minneapolis and its school were too small for me. New York, and its Film Academy, were great, but they were too big. Like a Bohemian Goldilocks, I had to find the place that was just right. Columbia College Chicago was an art school that taught everything from writing to dance to theater, and more. I went for film; screenwriting, to be specific. I went there for years, taking a mishmash of classes, not rushing toward a degree, but gradually building toward one. Eventually, after nine years of part-time scheduling, I got my diploma. [Hold for applause.] Now, here I am, years later, and I know the questions you must be wondering: Have I ever actually used my diploma to get a job? Do I now have a lucrative job in the film industry? Does having a degree in filmmaking ensure I am best friends with various movie stars?

The answer to all of these questions is a definitive “NO.”

I’ve never worked in the film industry. I’ve never sold a script. I’ve never pursued a career as a filmmaker. But that doesn’t mean I regret going to school for it. Actually, I’m very proud that I graduated, and I’m very thankful for all my schooling. A lot of artists debate whether or not they should go to school. “How do you teach inspiration?” they say. “How can you grade creativity?” Although school is vital to some professions, I would never try to convince an artist that they need school. What you need to do is channel your inner Goldilocks and find the path that works for you.

Although I am not currently pursuing a career in film, that doesn’t mean I didn’t learn anything.

I learned a lot. I directed a few films, wrote a few scripts, acted in some shorts, and all of those things advanced my understanding of the medium. It has helped me to appreciate films on multiple levels when I watch them, it has aided my connections with other artists when we talk about the craft of filmmaking, and it has helped me immensely when I make my own silly videos for fun. By going to school I met and made lifelong friends, I was surrounded by creative people who wanted to express themselves, and I learned a lot. I learned about film, but much more importantly, I learned about myself. School forces you to drive, to push forward. It gives you deadlines, it gives you assignments. All of these things made me a better person. Some of the most brilliant artists I’ve ever known didn’t even finish high school, let alone college. And on the other side of the coin, I have friends who graduated film school with me who are now traveling the world making movies and television. We each have to find the path that works. If yours happens to wind through the middle of a university, go with that flow. If not, that’s okay as well. As long as you keep an open mind and an open spirit, you’ll get to where you need to go. Photo by Kelly Shortandqueer.