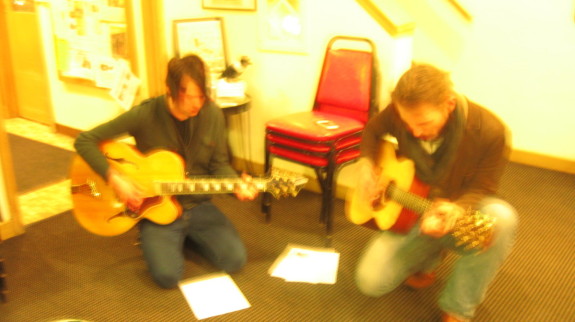 Musical unschooling at its best.

Ah yes, I remember my first violin lesson—or do I?

Because what stood out most about it is the avalanche of dandruff that was perched upon my teacher’s shoulders, just waiting for me to sneeze (or breathe even) and we could have instantly created a scene from Dr. Zhivago.

Then, came piano. All I know is one thing: If you would like to hear “Camptown Races” played with all the vigor and enthusiasm of an Olympian, than I’m your girl. Only thing is, that’s about all I can play, and this can get very tiresome at dinner parties.

I taught myself how to play guitar, first learning strummy Bob Dylan tunes, and quickly abandoning that for memorizing Poison Ivy riffs. You know Poison Ivy from The Cramps? Well she looked badass, she was talented, and was a red head! (At least we had that in common.)

For some reason, I’ve really struggled with being “taught” anything musical. This, if I may say so, is not something I’m proud of. I always leaned more towards the “Wow, they look and sound amazing, I’m going to work really, really hard at trying to sound like them and do what they do.”

I envy trained musicians, and I am honest about that now.

I just encourage people to play sounds. I’m partial to the “Get it out, whadaya gotta say?” attitude. Sure, I may be completely wowed by someone’s technical abilities, unable to take my eyes (or ears) away—but I’m often just as drawn to someone who can barely play one note, but for some reason, they are able to deliver something just as pure and beautiful.

My hat is off to either approach.

Liv Mueller is a musician from the fine Midwest. In previous lives, she fronted indie darlings The Lovelies and post-punk band The Dark Horse Project.

She has lived in Nashville and Austin, and currently resides in Wisconsin, buried in snow. Right now she is probably watching some Mae West film, or recording her music. She currently plays solo.

View all posts by Liv Mueller →