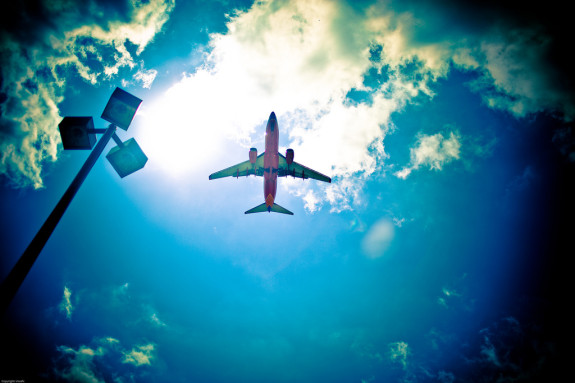 Sometimes it may seem like the man is out to get you (shine on, you crazy free-spirited artist-folk, you) but in this case, the law is actually on your side. You can take your instrument on the plane—erhm, a plane governed under U.S. law, anyway—no matter what airline staff tell you. We’ll let Ari from Ari’s Take explain:

I fly a lot with my guitar. It’s a $2,000 Taylor. Over the years, airlines (namely US Airways and United) have told me that my guitar MUST be checked. This usually happens at the gate. However, at LAX they have their own guards checking you BEFORE you even get to security. A few months ago they tried to turn me back to the ticket counter to pay the checked baggage fee and check my guitar…

…UNTIL I whipped out the FAA Modernization and Reform Act of 2012 section 41724 LAW. Bitches.

Yes I had the new law printed out and I showed them. Obama signed this bill into law on February 14th, 2012.

What is the law? Well it’s 145 pages of various airline passenger rights, but hidden on page 74 and stretching all the way to the middle of page 75 is the Musical Instruments clause. It states:

“An air carrier providing air transportation shall permit a passenger to carry a violin, guitar, or other musical instrument in the aircraft cabin, without charging the passenger a fee in addition to any standard fee that carrier may require for comparable carry-on baggage, if

(A) the instrument can be stowed safely in a suitable baggage compartment in the aircraft cabin or under a passenger seat, in accordance with the requirements for carriage of carry-on baggage or cargo established by the Administrator; and

(B) there is space for such stowage at the time the passenger boards the aircraft.”

There it is. Black and white. LAW. Signed by the President.

Per point B, make sure you are able to board the plane EARLY. On Southwest, boarding order is determined by when you check in. You can check in online 24 hours in advance – set your alarm. Check the other airlines to see how you can get an early boarding group. Sometimes if the gate attendant is nice, she/he will let you board early if you ask politely (Southwest usually lets me on during family boarding).

I urge you to print this section out (and maybe the cover page) and carry it whenever you travel. Technically the airlines must comply “Not later than 2 years after the date of enactment of this section.” So February 14th, 2014, BUT you don’t need to mention that part when arguing with the gate attendant. It is the law and they should comply with it.

If you have an instrument that doesn’t fit in the overhead compartment (like a cello), you can buy a ticket for it. That’s in the next part of the law. They cannot charge you an additional fee if it’s less than 165 pounds and is in a case.

Read the article at Ari’s Take.

Also, check out this song by Dave Carroll. Spoiler alert: it’s about the tragic demise of a checked guitar.