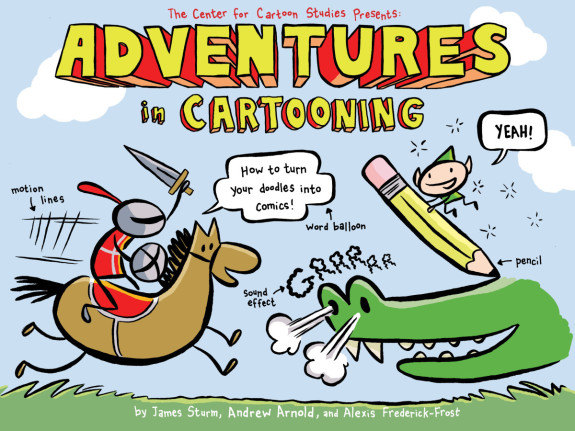 James Sturm is the Director and co-founder of the Center for Cartoon Studies.

Based in White River Junction, Vermont, The Center for Cartoon Studies (CCS) is devoted exclusively to cartooning and sequential storytelling.

James is also a prolific cartoonist, an Eisner Award winner, a columnist for Slate.com and a family man. As a cartoonist myself I was most pleased for the opportunity to ask him a few Burning Questions.

Edie Everette: I got a visual arts degree, which to me doesn’t make as much sense as getting a MFA in cartooning like one can at The Center for Cartoon Studies—at least with cartooning there is something to actually TEACH. Since postmodernist (i.e. no figure drawing, perspective, etc. to be taught because you are just making sculpture out of bread bag tags, which is cool) fine art degree colleges have only theory to pitch. But cartooning as an academic venture seems pretty new, and so hasn’t had to go through that concrete-to-abstract journey that most fine art curricula have. Do you think a cartoon college is relevant because of the nature of the genre or because it hasn’t been in play as long as other jaded stuff, or both?

James Sturm: I enjoy abstract work as well but damned if I know how to teach it. I think there is a language of comics with every panel trying to articulate something. If panels are confusing, things can go awry for the reader fast.

When I taught comics at a big art and design school I used to ask the security guard or janitor into the classroom and read the work being discussed. One of the reasons I love comics is that it is a popular medium and you shouldn’t need a PhD in Art History to understand the work. I’m glad comics are now considered art and literature but at the same time I’m also thrilled that comics will always be this assessable, unpretentious medium. At its heart, comics is visual communication and it is more relevant now than ever.

What if any differences do you see between the cartoons that we grew up with versus contemporary comics?

No two cartoonists work the same way and even the most accomplished cartoonists have to really fight hard to get their work to sing.

The comics I grew up with were Marvel and DC superheroes, Archie and newspaper strips. Growing up in pre-internet suburbs, that was about it. There is so much going on with comics nowadays, from subject matter to format, that it’s hard to wrap my brain around what “contemporary comics” is.

In a Booklist interview in 2008 you said, “The work that ushered in this new era of graphic novels was inspired by comic books and reflects their influence on density and page layout. In the coming years, I think we’ll see more graphic novels shaped from an aesthetic informed from children’s picture books, graphic design, and painting. Drawn & Quarterly just released White Rapids, which is more influenced by graphic design than traditional comic books. Some of the work featured in the Kramer’s Ergot anthology appears to be informed by a sensibility not derived from comic books.” Have you found this to be true?

Yeah, I stand by that statement. Young cartoonists are not all coming from the same wellspring of artistic influences. There are plenty of young cartoonists doing inspired work who could care less about Jack Kirby or George Herriman. As comics’ cultural currency increases in value the medium attracts practitioners who have been shaped by other traditions. 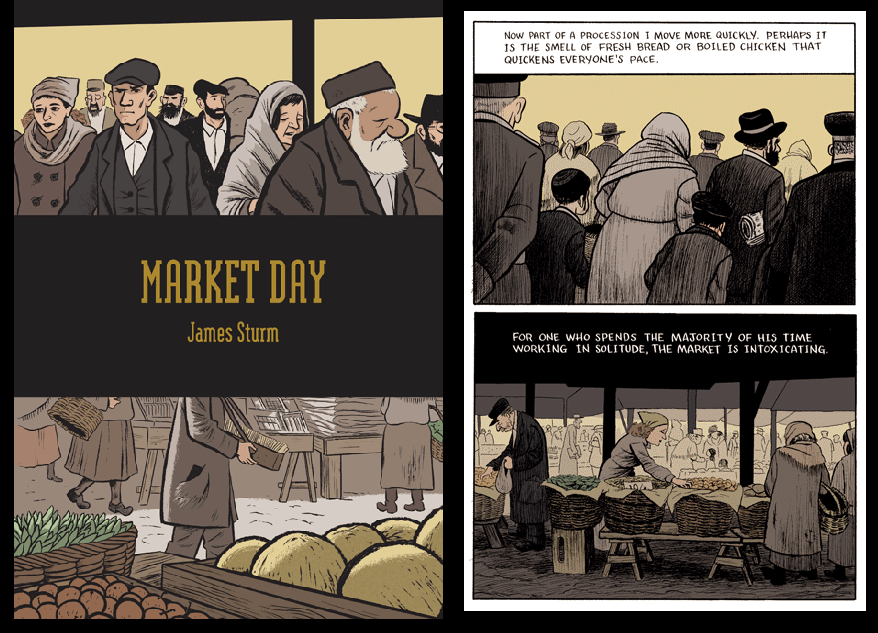 How has the program at CCS changed since its beginnings? What have you learned about the nature/needs of teaching cartooning?

CCS has changed quite a bit since it opened. The school has added many key faculty members and their passion and smarts is what shapes the curriculum more than anything else. CCS also has alumni now! It’s great to see them go out and leave their mark then share their experiences with current students. That certainly makes for a richer experience.

What advice to you have for beginning cartoonists?

Make comics. Make finished comics. After a certain amount of pages the comics will get better. Also: Too often we are haunted by this feeling when we don’t get the results we want or things get challenging that we’re not doing something the “right” way. This is nonsense. No two cartoonists work the same way and even the most accomplished cartoonists have to really fight hard to get their work to sing. If you are dogged and can continue to produce you’ll get better. 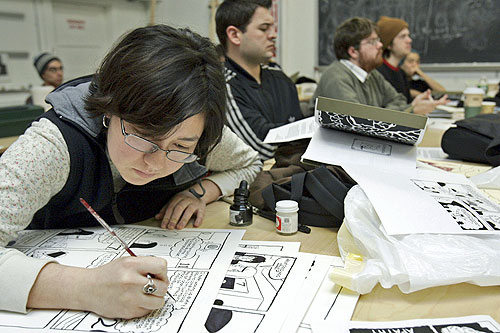 What are you reading now?

Right now I’m in the middle of three books. Two novels: A New Life, by Bernard Malamud and Tom DeHaven’s Painters in Winter. And one non-fiction book: 1421: The Year China Discovered America (actually this book could be fiction too—fun read, nevertheless).

What projects are you working on or dreaming about?

I’m in the middle of one really huge project that is kicking my ass. It feels liberating when I take breaks from it. My “break time” work has been a lot of fun—mostly kids’ comics/picture books. I’m also collaborating with a performer friend of mine on a kamishibai performance. He performs, I draw the pictures.

I think comic art festivals and cons are super-inspiring. You come across amazing work and get to connect with people equally as passionate about comics.

What are your thoughts about web versus print comics?

Just staring at a screen so defines my experience of reading that even very good online content seems diminished—like the best it can hope to be is diverting. As a reader I want more than diversion.

How many students attend CCS at a time?

Around 40 full-time students. During the summer several hundred more come to Vermont for week-long workshops.

Was there a model school that you looked at? Have other comics schools opened since yours?

My experience as a student at the School of Visual Art’s MFA Illustration program had a big impact on putting together CCS’s program. Marshall Arisman, who started that program (and continues to guide it), is both mentor and inspiration. Many schools have started comics programs. Most are low-residency and online offerings. I don’t think any foster such an intense, challenging, and supportive community.

What are your thoughts on ComiCons?

I think comic art festivals and cons are super-inspiring. You come across amazing work and get to connect with people equally as passionate about comics. What’s also great is how accessible even the great cartoonists are. You could be just starting out as a cartoonist and find yourself having casual conversations with David Mazzucchelli or Jamie Hernandez.

What do you do for fun in White River Junction?

Fun is making comics—or sometimes having made a comic. Besides comics, Jason Lutes hosts a weekly game night, Steve Bissette hosts a weekly movie night, and I corral students to the gym for the weekly basketball game. There are a few bars in WRJ, karaoke, and plenty of outdoor activities if you like to hike or ski. Dartmouth College is, like, five minutes away, too.

How do your columns for Slate inform your teaching and vice versa?

I tend to work on long projects so Slate gives me the opportunity to get in and out of something relatively quickly. Deadline work is its own beast.

Who are some of your favorite contemporary cartoonists and why?

I love Chris Ware’s work. Jaime Hernandez, Kevin Huizenga, Rutu Modan, Seth, Crumb. How great is Eleanor Davis’ work? Luke Pearson’s Hilda books are fun stuff. This isn’t a fair question! I could easily rattle off another couple dozen names (plus a host of younger cartoonists including many CCS alumni).

Why do I appreciate their work? I love the vibrant and full worlds they create. I love how each of them draws. I like how they construct characters. I love how their work makes me feel like a more connected and empathetic human being. 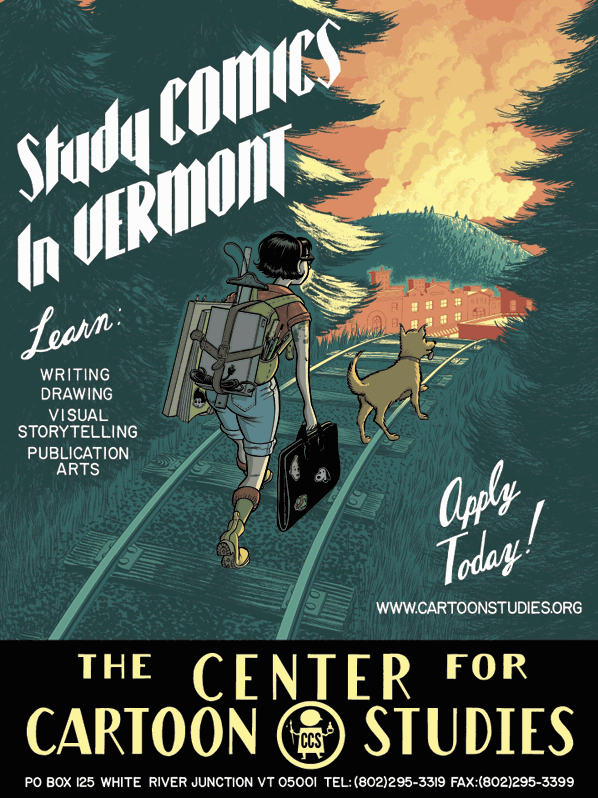