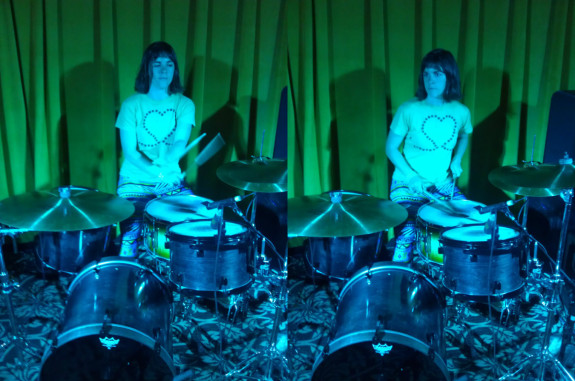 Eva Avenue drums on a set below Neumos in the city of Seattle, where there is a strict formulaic approach musicians must take to rise to the top.

Imagine your first interview when you were finished with your education and you were job hunting. You’re nervous, excited, hopeful — but one thing is almost certain: You were not interviewing to be the CEO of the company. Some of you may have an anomalous story where a company was passed onto you, but for most, you interviewed for an entry-level position, and you were happy to do so.

When entering a field of work, most of us are equipped only with a work ethic and a willingness to learn.

SO…why is it that when so many enter the field of entertainment (more specifically, music entertainment), that we expect that our first position we receive should be at the top of the food chain? Nothing else in our lives support that line of thinking, yet so many musicians I encounter hold this logic to be true.

I can certainly sympathize with a culture that tells you if you haven’t tried out for American Idol or The Voice that you haven’t really “gone for it” as far as your music dream goes, but when you tell you father-in-law that you’re starting a company to support your family, do you think he says, “Have you tried going on that show The Apprentice? That’s the only way you’re going to be able to succeed.”

More than likely, a discerning father-in-law will ask you questions about obtaining a business license, your revenue streams, your long-term goals, and for the most part, will be searching out the holes in your plan in order to make sure it’s gone through some trial by fire for the refining of the idea. Being a musician is difficult.

There’s an entire world that exists as far as mastering an instrument, and maintaining a certain mastery of it. Presently, making a living as a musician involves more than just practicing and performing, but also requires resourcefulness — selling the music whether in performance, recording, licensing, sponsoring, etc.

Hear me loud and clear: If you are an original musician (meaning, you compose your own music) YOU CANNOT START AT THE TOP.

Recognize that the journey will be long and difficult, but take comfort in that as well. You will learn more lessons and have a greater understanding of your character, your instrument, your business and your life if you take this approach. If you release a record and it only sells 100 copies — good. You will have an idea what you can do better the next time around. If you play a show and there are only seven people there — awesome.

Make sure you play the best show you possibly can for those seven people and encourage them to tell their friends so that your next show will have 14 people. Don’t get discouraged. Hold fast, work hard, and be faithful to develop the talents that you have. I guarantee you it will pay off — even if it’s not in the way you think it should.

Matt Jones is a singer/songwriter, and has had a full-time career as a solo artist for about seven years. He previously had a rock band that, while determined and talented, fizzled out about a month after it had an opening slot for Rod Stewart and an untimely purchase of a dog by its lead guitarist’s girlfriend.

“I’ve learned a lot during my musical journey, but also realize that I have much to learn. I hope to convey in my posts that I’m excited to educate myself (and others) about new resources for the business side of music, and to encourage ideas for the development of the art form.” —Matt Jones

View all posts by Matt Jones →