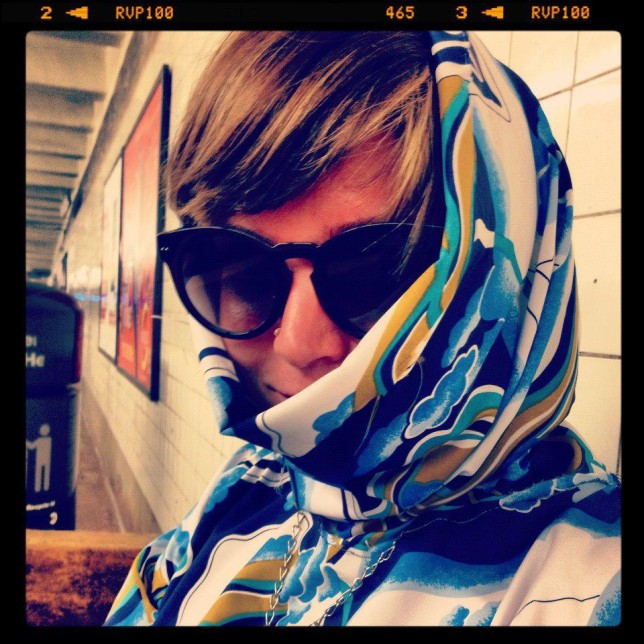 Do I look like I wanna discuss my writing career with you?

If you’re like me, you’ve probably stopped telling strangers what you do for living.

The random individual who sits next to you on a plane; the friendly stranger at the bar; the slightly flirtatious barista/baristo; the interested neighbor down the street, etc.

I learned this very early on in my writing career. I was flying from New York to New Mexico and I got trapped in a window seat next to a “talker.” Despite the fact that I was wearing sunglasses, headphones and a hood, this person really needed to connect.

“So what do you do?” The man shrugged towards me, his eyes seeking the full contact I would not relinquish.

“I’m a writer,” I mumbled into my giant scarf.

“You know, I’ve always thought I could write a book….”

This is almost everyone’s response to my answer. I’ve got a story. I’ve got an idea. My cousin told me this great story, which would make a good book. I’ve been told I should be a writer. I always thought I would write a book. I also consider myself a writer….

In order to be a writer you must get off your ass and write.

These conversations never end with discussions of pages written, written outlines, or any kind of realized poundage of writing product.

When I was 22 I lived in New York City, and I was too afraid to go around calling myself a writer (mostly because at that time I wasn’t writing). I thought the muses would come and revoke my license, never visit me again if I took the title without backing it up with pages. I also knew that was a lie. If I wasn’t really writing, I wasn’t really a writer.

I was doing a lot of things: drinking, hanging, dating the wrong people, working, walking, paying bills, looking at art, having a quarter-life crisis, eating well, crying, dying inside, etc.—but I wasn’t writing.

People may argue with me, but I do not believe that being a writer is an identity you retain even if you’re not writing, in the way that addicts are always addicts even when they’re sober. Writing is a practice and if you’re not practicing it you’re not getting better; you’re not on your way to something significant.

I told my class just the other day, “You will have to sit down and write when you don’t feel inspiration. You will have moments where you call the muse, and that bitch is at the mall. You must write, regardless.”

One of the smartest professors I encountered in Graduate school, Dan Mueller, sensing my struggle with production, quietly told me one day, “The best thing you do for yourself is to train yourself to write at any time of day, anywhere, under any circumstances. Don’t make writing time special and pampered. Practice it all the time, wherever and whenever you can.” Greg Martin, an equally smart professor, told me to create appointments for myself to write every single day in what he called a treadmill journal. If I didn’t make an appointment for it, I wouldn’t do it, he claimed. He was right.

This should be a wake-up call for any writer who hasn’t written something in a week. I’m calling you out. For that week you weren’t a writer.

So I did what they said.

I made appointments to write and I wrote in bed, late at night, and early in the morning. I wrote at every café in town, even the terrible ones, even the ones so thick with B.O. and bongos and alfalfa sprouts and bullshit it was almost unbearable. Sometimes my roommate wrote standing up at the kitchen counter while I wrote on the other side, on an uncomfortable stool. I wrote in the library with compulsive throat-clearers and nose-pickers; I wrote in an armchair in the lounge in the department; I wrote on my best friend’s couch in Brooklyn. I wrote in my office between student appointments desperately trying to keep my train of thought.

I wrote. Not all of it was good. A lot of it was horrible. But I was doing it.

The good news is, the minute you start writing, you’re a writer.

You could not write your entire life, sit down one day and do it, and bam—you’ve joined the club. The hard part of this plan is writing something “good” or “worthwhile.” But if you don’t put something on paper you’ll never get that chance.

I dread these conversations with strangers about writing because I get frustrated with the hemming and hawing. They, too, have a budding writing career waiting for them, somewhere, when the only thing holding them up is actually writing it down. I always encourage them to write. Sometimes they’ll try to give me the ideas they are convinced they won’t ever write down.

The last time I told someone I was writer I had to say it: “The only difference between you and me is that I actually write things down.” We all have stories, a sense of how to tell one. A writer is not just someone who has understanding of story, of meaning, of humanity, of how to entertain, of how to utilize language in a pleasurable way: a writer writes. This is does not make a writer better than anyone else, or smarter than anyone else; it is just the definition of what they do.

I’ve been clinging to this Bruce Lee quote recently: “Action is a high road to self-confidence and esteem.”

Notice he didn’t say success. He said action. Doing nothing makes us feel like shit. Any writer knows that if you don’t write for a certain amount of time, you feel absolutely horrible: You’re cranky, you feel off, people annoy you, you want to punch things, you need a raspberry Popsicle and a shot of whiskey NOW!

You’re basically writer PMSing: Pre-Writing Syndrome. Doing something (even if you’re not successful) puts you on the path to gaining confidence; it’s a relief from nothing.

This should be a wake-up call for any writer who hasn’t written something in a week. I’m calling you out. For that week you weren’t a writer. You might have been a student, or a mother, or a baseball coach, or a cook, or a boss, or a secretary or all of the above but you were not a writer. Get off your ass and write.