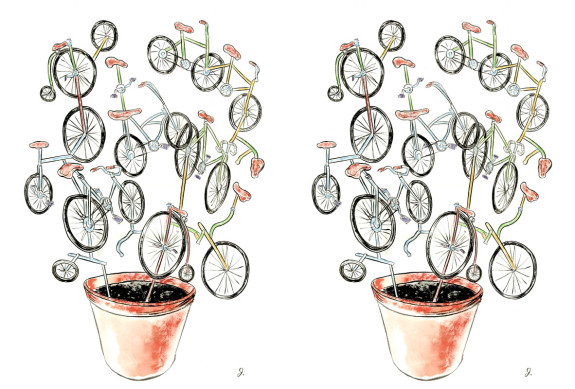 Most of us begin by emulating the work we admire.

What we inevitably copy is style or manner. The superficial aspects of what makes the work unique. This is imitation, rather than influence. Imitation is a great way to learn. Some of the best artists begin their education, even their careers, imitating others. But you probably don’t want to be an imitator forever. Be inspired by, but don’t revere other artists. Picasso said that when you copy another artist your mistakes are what belong to you. That’s what you contribute uniquely to the work. The other side of this is that everything you want another artist’s work to be that it isn’t, also belongs to you. No artist is able to realize 100% of their vision. Every new piece of art is another aspect of that vision, but it’s always a part of the process of searching, of trying to conceptualize and execute their ideas using imperfect tools.

If all you do is imitate, you have no gift to give to yourself, or to anyone else.

Revering another artist’s work prevents you from seeing this. Reverence is a form of idealization, and idealization is the failure to see the flaws in a thing. So making art that is uniquely your own is by necessity an act of irreverence. Influence over imitation. Flaws are in part implications; they are a hint to something more. They participate in giving a work its meaning. So you can learn from even the most uninspiring work, because every uninspiring piece suggests everything that it isn’t. The difference between art that is uninspiring and art that is inspiring is that art that is uninspiring is directionless, while art that is inspiring transports us. Art that inspires us is a clue to a bigger picture that has yet to be seen. It also provides us a place from which to view it. But that vision is different for all of us; no art is a perfect compass. Trying to discover what a piece of art suggests to you, and you alone—this is influence.

We all borrow from different sources. We all have our influences. But if you are able to look at a piece of art and see it irreverently, to see it for what it isn’t, you can let it inspire you to make work that reflects more of what you alone can see. Be inspired by the potential in every piece of art you see to be something more. And by “something more” I don’t mean something better. I mean something that has yet to be discovered. Use that inspiration to make art you want to exist in the world, because it doesn’t yet. Because it won’t until you make it. And like any artist you admire, even at your most successful, you’ll only be able to realize a very small part of that potential. But if you explore that potential as rigorously as you can, and if you focus on that vision with as keen an eye as you can, the art you make will lead you and those who are inspired by it to someplace entirely new. The act of making art is as selfish as anything you pursue for your own enrichment, but the product of the effort can be a gift. When you make art that is your own, you are pursuing a desire for something more, and realizing some small part of that is a gift to everyone you are able to share it with. But if, beyond whatever satisfaction you get out of the act itself, you never try to make something more, if all you do is imitate, you have no gift to give to yourself, or to anyone else. And there’s nothing more frustrating than trying to be something you aren’t.  Illustration by Jed Alexander.