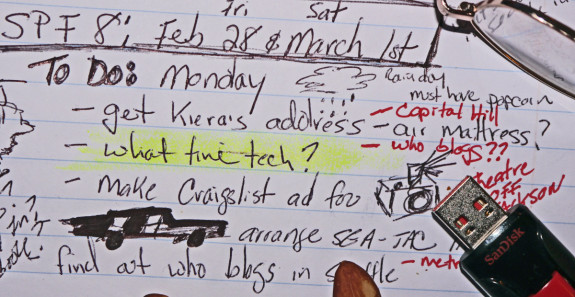 I got another one of those infuriating, “I wish I had your life,” messages from a friend who works 8am–6pm in a downtown office building.

Artists, you know where I’m going, right? There’s this idea floating around that because art is your work, and you set your own hours, that means you sit around all day daydreaming. Sitting, yes; daydreaming, not so much.

Very little or even no part of my day is spent on creating art.

Most days are consumed with the administrative, organizational, managerial side of being an artist. Pissed, I sat down and wrote a list of everything I did the prior day—a holiday, no less—as I prepared a development tour of my play Killer Quack. Most of the stuff on the list is related to the tour. I should put “-ish” after every measurement of time, but otherwise I’m presenting it to you with a minimum of editorializing.

This was my day as a working artist:

Created a To-Do list for my upcoming shows at the Seattle Solo Performance Festival at the end of February. Composed a pitch to several local journalists and bloggers for some pre-show press.

Emailed a musician I worked with at one of the live NPR shows about writing some original interstitial music for Killer Quack. Wrote out explanation of what I needed and when.

Read letter from the subject of my play. He’s serving a 20-year prison sentence at Attica Correctional. Internal debate on whether to respond now or later. Chose later.

Read article about promising one-person show I’d like to see in DC. Investigated ways to either perform or teach a class while in DC, if I make the trip. Sent out email and FB feelers to DC contacts. Hit up friend in Dupont apartment with an inflatable mattress for place to stay.

Put out some feelers for a place to stay in Orlando during the 2014 Orlando Fringe Festival.

Exchanged emails with local comedy venue producer in Orlando about booking extra gigs during festival or even pre-festival as promotion. Got shot down. Despite having sold-out the Orlando Fringe five times to the same audiences that go to his club, as well as much bigger, better venues with actual paychecks included, I was told I wasn’t interesting enough for his club.

Contemplated the shoebox of receipts that need to be organized and filed, and the file-box I bought but have not opened.

Received email from a director I worked with on a workshop production of my play. Seems he feels I owe him more money. It takes a half-dozen emails back and forth to reach an amicable settlement for his services.

Composed a script for a fundraising video, then reduced it to bullet points.

Received small check for writing job, got deposit slip ready and put it where I will remember to take it to the bank.

Phone call with a fellow Groundlings alum. Discussed sharing a summer job teaching improv classes. Concluded that it’s not likely to work out due to tour schedule conflicts.

Staged a corner of the apartment to film part of the fundraising video.

Filmed myself explaining why people should give me their money.

Transferred photos to be included in the video into an iPhoto folder so that I can find them faster when I’m editing in iMovie.

Wrote to the videographer who filmed workshop production of Killer Quack to find out what happened to all that great stuff he shot of audience members saying how much they liked the show.

Researched best way/day/time to get to London, Ontario for 2014 London Fringe via Toronto, Detroit or flying directly, and whether there was a way to spend or earn reward points doing it.

Emailed contact in Toronto about extra gigs in Toronto during days off at London Fringe. Researched whether there was an Ikea within driving distance, in case I need cheap set pieces.

Accepted an invitation via email to perform at a benefit in Chicago and then received another email telling me that I needed to audition for it. Declined.

Wrote emails to several friends bitching about it.

Conversed via phone with a storytelling show producer here in NY. Followed up with an email including video, podcast, press. Rewrote it several times so as not to seem either too eager or blasé.

Opened responses to Craigslist ad I placed for a kinetic typographer to create content for fundraising video. Watched some of their reels, tried to get a sense of their personalities, and responded to several of them.

Sent email to the guy who was supposed to create a website for Killer Quack. He has disappeared twice in the past month. Do I need to find someone else or what?

Continued email conversation with my accountant about my needing to file a corporate tax return for the LLC I created for all of my art-related work.

At request of accountant, researched options for obtaining a credit card to be used only for arts-related business, their costs and rewards programs.

Created new Craigslist ad for a photographer in Seattle to come shoot production stills during the tech run-through.

Got an email back from NY producer offering me a spot in her show in March. Decided to end the day on a high note.

Was it a good day?

I don’t know, but I’d say it was a typical day. Nowhere in it was the time I needed to do things like exercise and go to the grocery store to buy food or focus on my husband.

Was it artistically fulfilling? No. It didn’t include any work on my script, or, heaven forbid, rehearsal. Nothing in it made me feel like I’m becoming a better artist.

Was it a legitimate workday? Yes, though it feels deflating to look at my slow accumulation of progress.

Probably the day’s biggest accomplishment is this record of how it was spent. It’s proves to me that I am moving toward the place I want to be. It’ll work for you, too. Just open that online calendar and start typing.