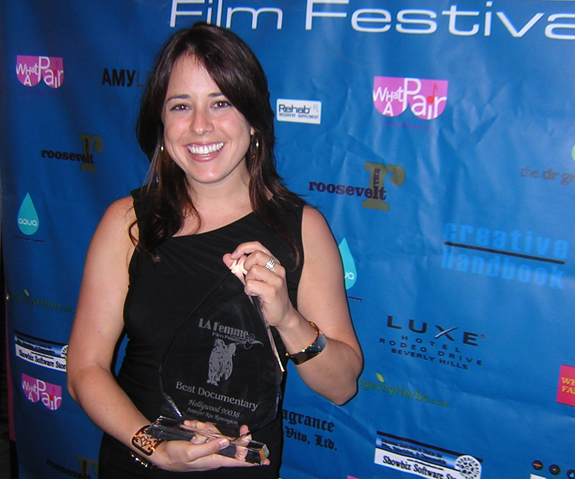 Winning Best Documentary at a film fest in 2007. Best day ever.

So it’s awards season time. I don’t know why so many are in January and February. You’ve got the Golden Globes, the SAG awards, the Annie Awards, the Grammys, and most importantly, the Oscars. There is much hullabaloo about all of these awards, most of which I don’t care too much about. I mostly like to just watch and see what all the chicks are wearing.

But the thing is, I always hope that some freaking day that will be me there, wearing some fancy get up, listed with four others for Best Original Score in a pimp-ass movie.

A lot of people don’t give a crap about awards in general and think they don’t mean anything. To me, I don’t care if it’s some fake gold object you put on a shelf. It’s my goal to win an Oscar, and it means something.

It means I’ve made it, I’m really good at something I’ve worked for my entire life, and gosh darn it, you really, really like me.

Speaking of really, really liking me, let’s talk about hyperactive award acceptees and their bizarre-ass reactions, shall we? You must have heard about Sally Field’s speech in 1985 when she won for Places in the Heart. She was so excited and probably so freaked out that she said something that people would forever make fun of her for: “You like me! Right now! You LIKE me!” Settle down, Sally.

When I first saw that, it was so uncomfortable, yet hilarious. She got so ridiculously overflowingly emotional that when she won that award, it all just came tumbling out of her gullet in a gracious thank you to everyone that probably made half the audience relate to her on some insecure level, and the other half laugh at her for eternity. The best was when she presented the Best Actor award the following year, she totally had a sense of humor about it and made fun of herself.

For the record, I’m kind of indifferent when it comes to people using speeches and awards acceptance as a political platform.

I’ve compiled a list of some great awards show moments that stick out most in my memory. Most are from the Oscars because that is the show I watch without fail every year.

Good stuff! For the record, I’m kind of indifferent when it comes to people using speeches and awards acceptance as a political platform. On one hand, maybe you will annoy some people. On the other, it’s just good business sense. You have something like a billion people as a captive audience during the Oscar telecast. Why not say something about a cause that no one has heard about? Chances are that you’ll get more than one person to actually research this and find out what is going on.

I was sweating, shaking, and almost peed my pants walking to the stage.

And let me say, when it comes to Sally Field-type reactions, I sympathize a little bit. It’s a little-known fact that I have actually won a few awards myself. I mean, I guess it’s not that little-known since it’s on my website, but it’s not like I’m Oscar-level or anything.

I was onstage for four awards during my career: two for my documentary Hollywood, 90038, and two for co-winning Annie Awards for the animated TV show “The Foster’s Home for Imaginary Friends” with composer Jim Venable. And let me tell you, all four times were the same. I was sweating, shaking, and almost peed my pants walking to the stage. You probably can’t tell from videos, but it’s true (here’s one where I went onstage alone for “Foster’s”).

These things actually mattered to me, so it’s no surprise that I was so excited/scared when I was there. The one that really got me messed up the most was when I won for Best Documentary at the LA Femme Film Festival. I was shaking so hard I almost fell down the stairs (I feel you, Jennifer Lawrence).

Oh and PS…maybe the Oscar awards onstage are real gold or whatever, but when I got to hold mine during my speeches, they were fakes. They mailed the real ones later.

So I empathize with the award recipients. And I will never stop watching the Oscars and wishing I was there. But if you do some nutjob speech or streak the stage, you better bet I’ll be laughing at your ass, as I would totally hope you would do for me!