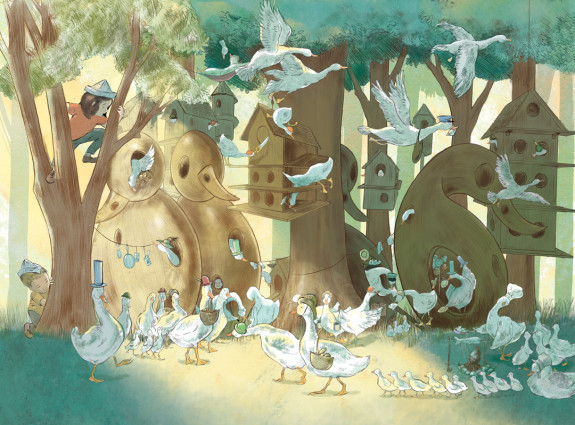 Illustrators (and picture makers in general) often tend to put everything they think is important in the middle of a picture. There are practical ways to break this habit. You can activate the space through cropping, or by leading the eye through the picture plane with color or shape, or using sightlines to direct the viewer to your focal point. Not that isolating your subject in the middle is something you should always avoid. But this is often a symptom of a bigger problem.

The problem isn’t that you put everything important in the middle. It’s what’s missing on the edges.

While in some instances, a more inventive composition may result in a more compelling image, it won’t necessarily tell a better story. Because no matter how you approach an illustration, illustration isn’t just about picture making, but storytelling.

In a lot of “thing in the middle” pictures, the subjects look as if posed on a stage set. The background is nothing but a backdrop and the subject exists only for the sake of that picture. Outside this imaginary set there is no sense of a bigger world.

The viewer should have a sense that something has happened before the events in the picture, and something is going to happen after.

This kind of image is very common on book covers, particularly in genre fiction where a single subject is posed like a statue with no sense that they belong in the space. Sometimes the figures are posed in what is meant to be mid-action, but the poses are static and unconvincing. The artist is focused on craft and craft alone—on making beautiful pictures of beautiful people in beautiful poses that consequently have no relationship to the world around them.

A lot of times these kinds of images are portfolio pieces, auditions for the kind of work that you would like to be hired to do. But if you want to make pictures that are more than just auditions or exercises in craft, they have to have a life of their own. Unless you are doing a conceptual illustration using metaphorical imagery (which I will get into later), you need to imply that the subject exists in a larger world, that the background isn’t just a backdrop but extends beyond the picture plane. You need to suggest that what we’re looking at is a captured moment in time, one image in a larger story.

The viewer should have a sense that something has happened before the events in the picture, and something is going to happen after. It should look as though the subject could walk beyond the border and into a world the viewer has yet to discover.

While this can be a natural consequence of making pictures in sequence, this isn’t always the case. Even in a picture book or graphic novel, your characters could end up simply moving from set to set, lingering just long enough to strike a pose, each image designed to suit the needs of the events at hand and nothing more.

An illustration with an implied narrative can be as simple as a portrait.

The way a character is dressed, a tilt of their head or particular expression, or if there’s more than one subject, the interaction between them—everything in the image can contribute to the suggestion that, even posed, the character has a life outside the borders of the picture plane.

When using the kind of metaphorical imagery found in conceptual illustration, the world outside the borders doesn’t have to be a literal one, but there should be a suggestion that the image comes from a larger pool of ideas, from a distinct vision that has continuity and purpose.

There are two kinds of illustrators who are able to incorporate an effective narrative in their work: Those who invent a new world for every picture or story, and those who have such a distinct way of looking at things that the body of their work itself suggests a bigger world. With the latter, even a simple drawing or study, when looked at in the greater context of their work, reveals one more aspect of their unique vision.

Whether you lean more in one direction or the other is more a question of personality than design, and most of us are a little bit of both. Both approaches are equally valid, but in order to invest your images with a true narrative, that larger world needs to be there.