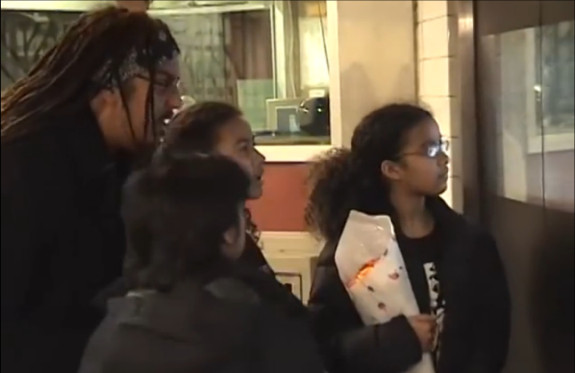 Viewers checking out my installation in the Bryant Park subway station.

Though I have created an expressive digital art medium, I’ve never been to art school and have taken only a few art classes in high school and college. So how did I manage to have my first big public art piece debut in 2010 in Bryant Park, a block from Times Square?

Here’s the story of how I did it, and how making that piece led to my teaching at NYU’s prestigious Interactive Telecommunications Project (ITP) without any prior connections there.

Looking back, both putting up a big public piece in Manhattan and teaching at ITP seem valuable to receive. Shouldn’t I have had to give something to get another, not get two things? Sure, my medium is cool, but many people make great work without getting into great institutions.

Entrepreneurial skills made this connection work.

I define entrepreneurship as acting without being limited by the resources available at the time. Instead of having resources, I thought about who would benefit, created relationships among them, and kept everyone motivated until it debuted.

I had heard a landlord was willing to show a public art piece in Bryant Park if it met three criteria:

I knew I wasn’t world famous (yet) and didn’t belong to any major cultural institutions, so the first two escaped me. I did know, however, that once my art was up, the public would love it and anyone involved would be glad they participated.

I didn’t know anyone there. I couldn’t just knock on their front door. They don’t have a front door.

So how to connect with an institution and make myself world-famous?

I first thought about New York universities. They’re New York-based and cultural, right? I approached my alma mater, Columbia. They showed some interest, but I couldn’t make any useful connections. I needed to connect within a department and I couldn’t find a relevant department there for a new medium. As I branched out to other schools, I realized ITP would be perfect, if only I could make a connection.

It also dawned on me that involving students could meet the world-famous artist requirement—while students aren’t famous, they might have as powerful an appeal to the public. I decided to try that angle.

So how to connect with ITP? I had been to their end-of-semester shows and loved their stuff, but didn’t know anyone there. I couldn’t just knock on their front door. They don’t have a front door. So I started channeling Horatio Alger.

I decided meeting people in person would work better than emailing or calling.

I searched their website for events there and found a potential way in: their Open House events for prospective students. I invested two hours of my time, not to consider enrolling, but to talk to anyone from the department in attendance.

It turned out the departmental coordinator ran the event.

After it ended, I approached her and described the opportunity to show maximum benefit to them: I had the chance to show a big public art piece in Bryant Park if it was backed by a major institution, with a major artist involved. I thought the Interactive Telecommunications Project at NYU-Tisch School of the Arts could be the institution—and the students could be the artists.

The installation featured the names of all the people and organizations involved, giving everyone benefit and credit.

If it worked, the students would get big public credit, as would the program. She sounded interested and asked about the art. I told her about the digital projection and animation with some awesome optics. She thought of a professor with similar work and walked me to his office.

Progress! That professor and I got along great. We appreciated each other’s work and spoke the same language. Only he couldn’t just hand out teaching gigs on his own. He said if anything was possible, the first step would have to come from students—would they value working on the project?

He proposed a talk to the department. I loved the idea. Even if nothing came of it, I’d get the experience and exposure of showing off my medium at ITP. As I’m writing, the announcement of the talk remains online.

After speaking about my medium, I told the students about the Bryant Park opportunity and asked if anyone wanted to join the project. Many did. The professor and coordinator helped us create a structure to ensure the project would have the students learn enough for class credit and set up independent studies for all of them.

Meanwhile, I persuaded the landlord to see the value of students as artists. Over the course of the next semester we met weekly, learned about the medium and display, created art for it, built the display and installed it.

The installation featured the names of all the people and organizations involved, giving everyone benefit and credit. As I predicted, the public loved it, and the organizations that risked their names with me were validated. Actually, I’ve worked more and continued relations with them both, which is my best measure of success.

You could split hairs and say NYU didn’t make me a professor, but I don’t see the distinction mattering. Meeting there weekly got me all the value of the community and got them all the value of me.

The main lesson was in how to create connections: Show up, with confidence in your work and ability to deliver what you promise.

Next, the value of community, and of meeting in person. I’m confident that appearing in person made the relationship with ITP possible. Even if I’d known whom to email, I doubt anyone would have known how to respond to it. Showing up meant the coordinator could immediately walk me to someone’s office, where instead of introducing myself, she introduced me, making it warm and in-person. Face-time matters.

Later I co-taught a full class at Parsons’s Design and Technology program to create a yet bigger public art piece in Union Square, to yet more public accolade, as in this NY1 article.

A Professor of leadership and entrepreneurship at NYU, he holds a PhD in Astrophysics, an MBA, and studied under a Nobel Laureate. He helped build a satellite with the European Space Agency and NASA. He co-founded a venture to market his invention—a medium to show movies in subway tunnels—which grew worldwide. He holds six patents. He taught art at Parsons and NYU.

Fascinated at how well business schools taught leadership and emotional intelligence, he studied it, becoming a leadership coach for Columbia Business School and private clients. He leads seminars in Leadership, Creativity, Sales, Strategy, and Motivation at institutions including Columbia, NYU, INSEAD, the NY Academy of Science, and corporations. Having visited North Korea twice, he lectured on North Korean strategy at Columbia,  and in Korea and China.

He has installed public art in Bryant Park, Union Square, and Amsterdam’s Dam Square. He has had solo shows in NYC, and group shows nationwide in museums, Art Basel Miami Beach, MTV, and more.

He lives in Greenwich Village and blogs daily at www.joshuaspodek.com.

View all posts by Joshua Spodek →