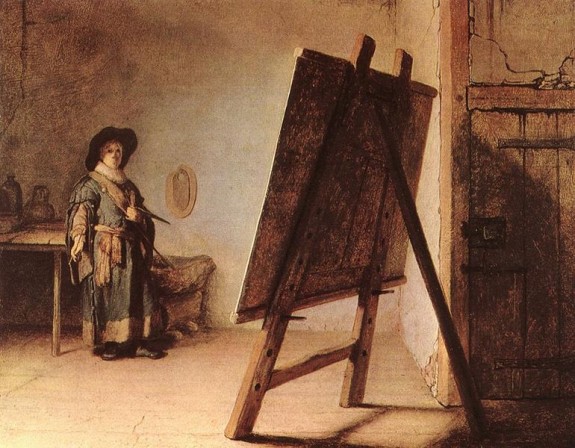 “The Artist in his Studio” by Rembrandt.

People who don’t practice art as a discipline tend to romanticize the artists they admire.

Rather than seeing art as work—like any work, like the work they do—they see it as some kind of magical process.

This fantasy has been perpetuated in the media. You see it in films like Amadeus and Vincent and Theo. The artists mumble to themselves, grimace, and in a whirlwind of frantic activity, the work materializes as a spontaneous and complete object of perfection, a result of innate talent and complex inner struggle.

In reality, making art tends to be a much more methodical process.

Like any work, it requires corrections, revisions and planning. While there are artists who produce work with speed and spontaneity, the process is no less meticulous and measured. The image of the harried, mad genius suggests a lack of focus that couldn’t be sustained in the real process of art-making.

There are always varying degrees of innate talent, but without discipline to go along with it that talent will never realize its potential.

The closest I’ve seen in the movies to the real process of making art was in Ed Harris’s Pollock. While the process was necessarily sped up because of the time constraints of a two-hour movie, it resembled the real methodical work of painting. And when Pollock was drunk, depressed or hungover, he was unable to perform.

You wouldn’t want someone semi-coherent working on your pipes or doing your taxes. Just as in any other occupation, artists do their best work when they are the most aware, rational, and competent. While an altered consciousness might inspire in the short term, you can’t work effectively for the long haul in this compromised state.

Addiction or illness, mental or physical, is an impediment, not an enhancement, to sustained creation.

Artists who do practical demonstrations, whether it’s drawing a portrait or painting a landscape, often seem to be displaying this kind of magical spontaneity, but this is out of practiced effort. It’s no more a craft than if someone were to demonstrate any other practical skill. Sometimes artists specialize in producing the same kind of work over and over, and though it took a great deal of work, effort and discipline to get to that point, and it takes work to sustain it, they’re not likely to evolve as artists.

Like repetition in any discipline, they’re no longer truly challenging themselves as they once did. And if they have to produce anything outside of their zone of comfort, it involves the rigorous work of problem-solving, revising, exploring ideas, of stopping and starting again.

There are artists who can be inventive in spontaneous performance (musicians in particular), but not without long rehearsal, practice, and many small failures and successes that aren’t revealed on stage. It is this illusion of a spontaneous and seemingly effortless process that makes people think that these skills are innate, rather than learned, practiced and rigorously executed. There are always varying degrees of innate talent, but without discipline to go along with it that talent will never realize its potential.

When someone commissions me to make a picture, it’s a problem to be solved. Whether it’s figuring out the palette, coming up with the composition or drawing a difficult subject, no matter how many times I’ve done it, there is no one way to resolve a picture. Each step is a new challenge.

It’s this image of the mad genius that reinforces the dismissal of the professional artist.

This is the work of art-making, work that is no different than work as we all understand it. But there is a misconception that art made by a professional who isn’t a suffering-mad-genius is simply a matter of execution. People take for granted that a commission not only involves time, but unpredictable challenges and sustained effort.

The one form of art that people tend to think they can perform more than any other is short-form writing. There are a great number of bad poets and aspiring, but undisciplined, children’s book authors, and while there are also a fair number of aspiring novelists, there are more who begin novels than finish them.

It is this misconception—that short-form writing like poetry and children’s books is easy to those who are successful at it—that tends to make people devalue the discipline. They admire it, but they don’t understand the effort involved.

I’ve attended workshops filled with people who have decided they’re going to write picture books or other short works for children in part because they perceive them as easier to write than novels. But short-form writing requires no less discipline and attention to craft. When a piece I do does feel effortless, it’s only as a result of the hours and hours of work that I’ve put into my craft, and unless it is something I’ve done over and over again using the same method, this kind of spontaneity doesn’t occur very often.

Art is work. Romanticizing the process only makes it worse for professional artists who need to have their work valued in the same way any work is valued, who are trying to be compensated for the genuine effort that that work involves.

Because you can’t have it both ways.

You can’t have tortured-mad-geniuses be revered and facile art-making machines taken for granted.

And as contrary as these two images are, it’s this image of the mad genius that reinforces the dismissal of the professional artist. Because if professional art-making is not seen as work like any other work, what’s left is the perception that it is executed with the pleasure and casualness of a hobbyist.

So if you are a professional artist, every time you hear about geniuses and their inner struggle, keep in mind that this image undermines everything that you do that deserves to be valued. And to fully value it, people need to see art-making in the same light as their own work—with all its frustrations, labor and discipline.

Image from the Web Gallery of Art.