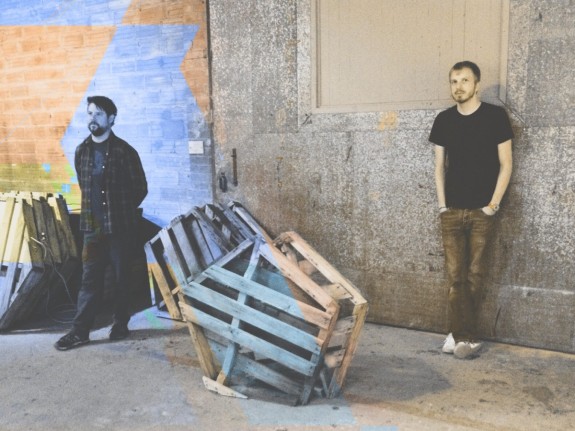 The last time Marty Crandall released a record, it was his first since moving back to Albuquerque from Portland, Oregon.

It was Electric Sounds, the 2013 debut album of his new (at the time) band Sad Baby Wolf. Besides being chock full of great songs and sounds, it was an occasion for Marty’s hometown to celebrate his return, and for fans bemoaning the new lineup of The Shins to get their Marty fix since the distressing Parting of the Ways a couple years earlier.

Well it is time to rejoice again, for Marty is about to release a new album, this time with a project called High Desert. Less than a week ago I was lucky enough to be given access to the tracks for a preview and it has basically been on constant play. It’s layered, rich and dreamy, with a more electronic sound than his previous projects, but featuring his unmistakeable vocals and fuzzy sweetness. I feel like I’ve been binging on digital angel food layer cake all weekend, which is the best kind, since it won’t go to my thighs.

Marty was kind enough to let me ask him a bunch of questions even though he’s in the middle of a move. AND he said Pyragraph could post a preview track from the still-unreleased record here! Check it out!

Hi Marty! Thanks so much for letting me put you in the Burning Questions hotseat. And even bigger thanks for giving us a sneak peek/listen to this sweet new project! So tell me, what’s the deal with High Desert?

High Desert is a new project between my good friend Nick Noeding Jr. and myself. It was an idea I hatched last year to challenge myself musically and to get myself out of my comfort zone. Nick comes from a more electronic/digital musical background and I wanted to see what might happen when we joined forces. Sad Baby Wolf (my four-piece band of the past three years) is still absolutely something I am passionate about and an active full-time member of. We continue to write together and play shows regularly. 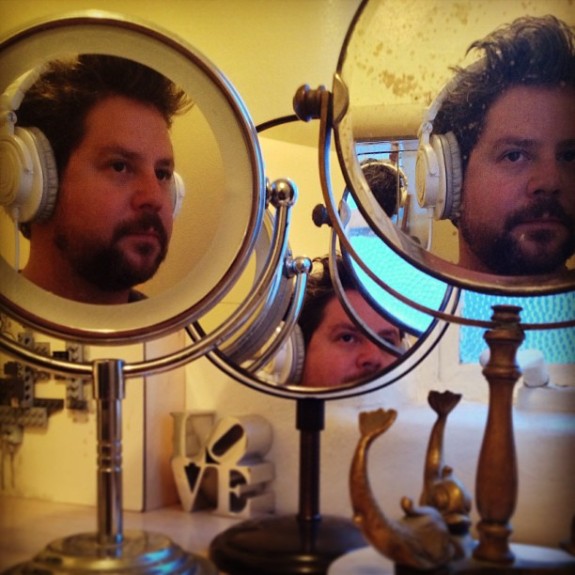 Cool. I saw your solo show at the Blackbird a few months ago which I think you said was the first time you had ever played alone. What was that like, and is it something you’re planning to do more in the future?

That solo show was a little nerve-wracking for me. I’ve played in front of large audiences for many years, but never have I done it alone. Once I had a groove going, maybe three or four songs in, I finally started to relax and enjoy myself. I’ve done it twice since then, and I would definitely do it again.

It’s fun to know you can do absolutely anything, improvisational or experimental, and there’s no other musicians that have to follow along. It’s also really difficult for people to know you messed up if you’re playing alone.

That’s so true. You can just move on and no one is the wiser! What was the recording process like for the High Desert project, and how involved were you in the process? What’s your general approach to recording?

All of the High Desert album was recorded, engineered, mixed and mastered by Nick and I in my home studio (we named it Sundowner Sound). It’s really just a room with some good microphones, good preamps and lots of toys to make joyous noise. Everything is recorded to my MacBook Pro on Ableton Live 9.

Oh, and I can play the “Game of Thrones” theme song on the pump organ.

Recording for this project was extremely organic and natural. Whatever felt right that day. Nick and I work together very well. I’ll start with a song idea, with a general structure and melody, and then we begin to record various instruments (some of them completely improvised on the spot) one by one until we get a general feel of the direction and mood of the song.

When I record there is generally quite a bit of experimenting, which I feel is the most fun part. Layering multiple bass lines, adding synths and doubling them with vocal harmonies. Digging thru my locker of toy instruments and recording a few tracks of those. Adding bits of squawking crows from my backyard. It’s a very unscripted approach, which in the end leads to some very unexpected bits of magic.

I’m in the process of moving now, so this record coming out is a bit bittersweet, as we are leaving Sundowner for good. But we will be setting up the new room and photo-documenting it as we go along. 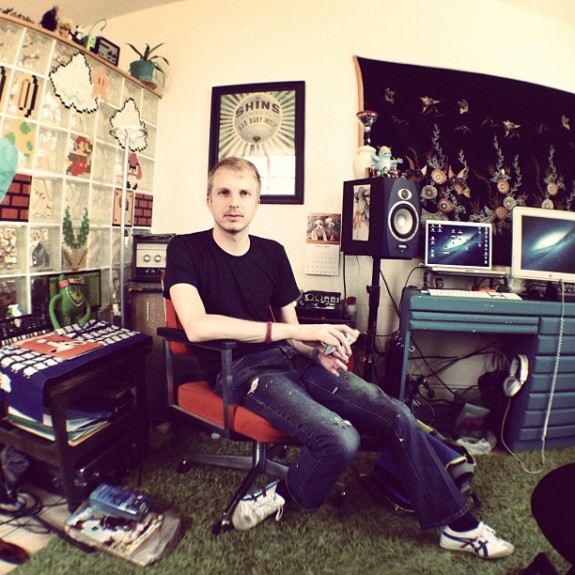 Cool. Good luck with the move and remember to lift with your knees. What’s the weirdest instrument you’ve ever played?

I’ve played one of those plastic toy noodles you spin around and it makes a whistling sound. I even played it live for a few shows. I trimmed it down to size to get the right pitch from it. I’ve also played the theremin (poorly), Jew’s Harp, and am trying to get the hang of the castanets.

Oh, and I can play the “Game of Thrones” theme song on the pump organ.

Sweet! OK, left turn here: High Desert’s Tumblr page is nuts! Where did you get all those amazing photos? How long have you been posting there? It’s amazing!

That is all Nick. He is a gifted fellow. He’s got a great eye and a very intuitive sense of design.

My friend Christina Kennedy told me you collect stuffed creatures/beasts/characters. What’s the deal with that?

I do love little creatures. Especially ones that seem to have come from someone’s dreams. I’ve got a small collection of strange stuffed animals, many of them Japanese characters. They hang out in the studio and act as cheerleaders/mascots for Nick and I as we traverse the unknown. Two of them, Bitey and Two Scoops, were actually working song titles for a while before we gave them proper names.

Not until the late ’90s when I formed a band called Somersault did I truly have the chance to grab the reins in the songwriting process.

You moved back to Albuquerque from Portland just a few years ago, right? How is life different for you here from Portland? How is it different from when you lived here before? What inspires you culturally/artistically here?

Portland was an amazing place to live, rich with a very flourishing artistic community. So many great restaurants, bars, venues, galleries, bands, retro arcades. I will always look back fondly on my times there. However, things change and it was time for me to get back to my roots and start over. Albuquerque was the natural choice.

I love Albuquerque. It feels like home. It always will. Who knows how long I’ll be here, but I’ll always feel inspired by the smells of burning piñon and desert rain. And the sunsets. And the food smothered in red and green chile.

Have you written songs throughout your musical career, or mostly with your more recent projects? What’s the hardest part for you? What’s your process? What are your lyrics typically about?

Songwriting is something I’ve always done, from the moment I was given my first guitar in 9th grade. For many stages of my life I was involved with projects or bands that either had a lead singer/songwriter or were a semi-collaborative effort. Meaning there wasn’t much room for us to be playing “my songs.” Not until the late ’90s when I formed a band called Somersault did I truly have the chance to grab the reins in the songwriting process. I recorded a whole record’s worth of material on my cassette 4-trak. It was so much fun.

“Forces” is a representation of what is worth and not worth obsessing over.

For High Desert it has been a very personal experience. I’ve discovered things about myself that I didn’t know were there. Loss. Break-ups. Moving back to Albuquerque had a huge impact on this discovery. I needed to sort things out and I felt that by exploring those emotions and creating musical pictures I could truly process them in a creative and fulfilling way. Most of the lyrics on the High Desert album reflect that. A lot of change, much of it beyond my control, had to be accepted and embraced before I could move on with my life. I think it’s wonderful to have a musical representation of a very hard transition. I feel Nick and I have created that. And I think it sounds pretty good.

It sounds really super-good. I’ve been listening all weekend. Tell me about your process, working alone versus collaborating with other musicians.

My experience is that it is good to bounce ideas off at least one other person. Sometimes I can live in my head for so long, mulling over this and that, and really just need another trusted voice of reason to set me straight. To keep me moving forward and not obsess.

Nick has been a blessing not only because he is that very strong voice of reason, but he is a wizard at the recording/engineering aspects of the project as well. Almost all of the High Desert album was recorded by Nick. He is a gifted engineer and has a very intuitive and creative ear. So in this case especially, collaboration has shown galactic results.

Would you mind me asking what’s your favorite song you’ve written in the past year?

I really feel like “Forces,” off of the High Desert album, gives me the strongest sense of fulfillment. The lyrics especially deal with a lot of the issues and emotions I was wrestling with for quite some time. Having to leave my long-time job in The Shins, the break-up with my girlfriend of eight years AND having to sell my house in Portland. I had to leave a life behind. These were all very difficult things to come to grips with.

What bands/artists are you listening to now?

I haven’t had too much time to explore what’s out there as much as I would like. Recording this High Desert record has been consuming my ear drums! I liked the last Notwist album. Unknown Mortal Orchestra from last year. The Oh Sees are great. I’ll always have a soft spot for the ’90s shoegaze I grew up on, too. Slowdive, Ride, My Bloody Valentine. I need to start searching for new sounds!

Awesome. Thanks so much Marty and congrats on the new project!

Cool! I’m glad you like ’em. We spent a lot of time on them. It was really fun.