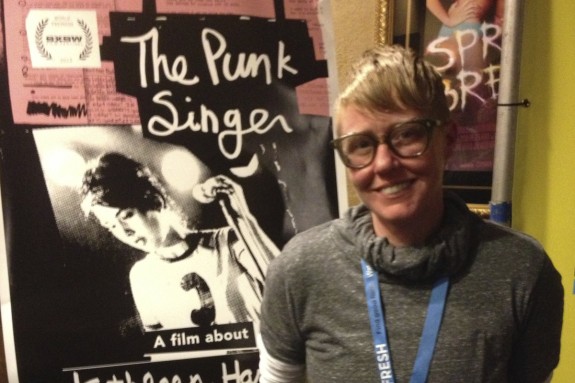 Sini and I were two of five flatmates in San Francisco in the early 2000s. At the time, I was writing Cunt and she was running Sister Spit.

I recently asked Sini to sit in the hot seat for some Burning Questions.

Inga Muscio: Hi Prince Shining! Are you ready for the Burning Questions I have for you?

Sini Anderson: Let’s do it!

Okey doke! Question #1: Sini, every film director I’ve ever known is a raging asshole, impervious to the reality of everyone outside their, ahem, frame. Now that you are a successful film director, is this your destiny? Why or why not?

Hahaha way to start it off, Inga!

There is so much involved with the business of making a film. I just want to make the films.

I really hope not. I think that what makes most people raging assholes is fear…fear of not being understood, fear of failing, fear of not being accepted and loved. That being said, I do have a lot of fear, but I know that I’m experiencing it and I can usually voice it. Hopefully I can voice that before becoming an asshole.

Goddamn, good answer. So how did you deal with those fears while you were working on your film? I mean, like before people saw your creative genius?

I’m still dealing with those fears! The film is finished but the work around it is not done yet. The business-end of making a film is the hardest part for me. I’m in uncharted waters, and I catch myself in a lot of fear.

As far as dealing with various fears while making the film, I think every time I found myself being in a lot of fear I shifted the focus away from my personal fears and channeled that energy into understanding my subject. It’s so much easier when the actual project is not about me.

What is the nature of the work once a film’s done? Also, elaborate on the business-end a bit, if you’ll be so kind.

Well, the film has come out in theaters, which is awesome, but we are still showing at festivals, opening in new cities, and we are just getting started overseas. This month IFC will release the DVD, so this film is still something that I work on every day. I keep waiting for it to be over but it’s not ending. [Ed. note: It’s now out on Netflix.]

The trick is, I need to find a job that pays. Making documentaries generally doesn’t pay. At least, this one doesn’t. So it’s hard to find balance.

Being sober the best thing I ever did for myself and the people who love me.

Those bitches in LA aren’t banging on your door yet?

Nope, no bitches in LA are knocking on my door. That may be because I don’t have a door yet. By the way, what is this interview for?

It’s for Pyragraph and it’s a lot about the nuts and bolts of how to survive as an artist/self-employed person. 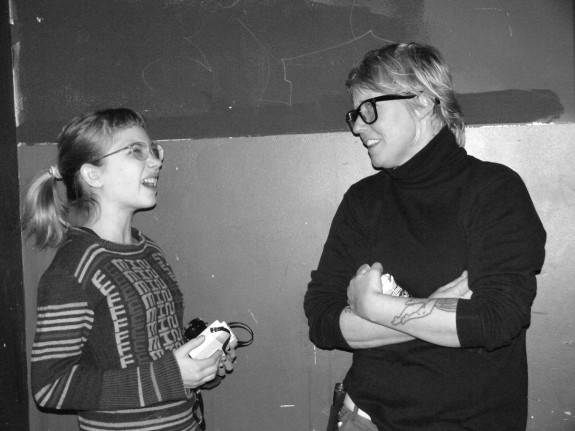 Sini and Tavi Gevinson at a tribute show at The Knitting Factory while shooting for The Punk Singer. Photo by Alesia Exum.

Okay. Are you ready for Burning Question #2?

You’ve been sober for a number of years….

Congratulations on that! When we lived together, I didn’t realize how much you were drinking. A lot of that went with the Sister Spit territory, I suppose. You were in nightclubs all the time for your job….

Oh, yeah. The Sister Spit territory was flooded with drinks. And thanks. Being sober the best thing I ever did for myself and the people who love me.

Do you think your creative genius at the time was fueled or inhibited by drinking?

It was what it was. I was doing the only thing I knew to really do at the time, but it goes back to the fear thing. I was so inspired and inspiration can be really scary. I think I was just feeling so much that I wanted to turn the volume down on it, ya know? But it might have just been turning the volume up for everyone else around me.

You definitely had volume, and you always told the best stories! It was a household event when you came home from your day and we’d all gather around to hear about it. Hahaha!

Okay, on to another Burning Question: You were doing Sister Spit and writing amazing stories/poems when you lived in San Francisco. When you lived in Chicago, you were a dancer. In New York, you became a film director. You’ve had a lot of success at each of these endeavors. Do you move to a new city whenever your creative genius takes a turn, or do you decide you need a change in your life, move to a new city and THEN come up with a new project/medium?

Huh, I never thought of my creativity like that. I think I move when I need to expand in some way. Not to say that I couldn’t expand staying put, but expanding someplace new does put an extreme edge on life. I don’t have my comforts here in LA. I have people I know here and I like them a lot but it’s not the community that I’ve known for the past 10 years.

I assumed you moved to LA because there are more opportunities for promoting your film there and/or getting work in film. Is that why you moved there?

Yes, that’s why. But then when you make a big move like that, it gives you time to change your mind. Like, “Maybe I should just be trying to get into a new field,” “I wonder if I’m doing the right thing,” blah, blah, blah. It’s that fear again that’s always gonna be there.

Look, I’m so lucky. My first feature was picked up by a major distributor and people are so supportive.

So yer sitting pretty pretty then.

I guess that depends on how you look at it. Pretty? Sure, I’m pretty.

Inga Muscio (www.ingalagringa.com) is the author of three books: Cunt: A Declaration of Independence, Autobiography of a Blue-Eyed Devil: My Life and Times in a Racist, Imperialist Society and Rose: Love in Violent Times. She is also a public speaker and lives in the Pacific Northwest.

View all posts by Inga Muscio →