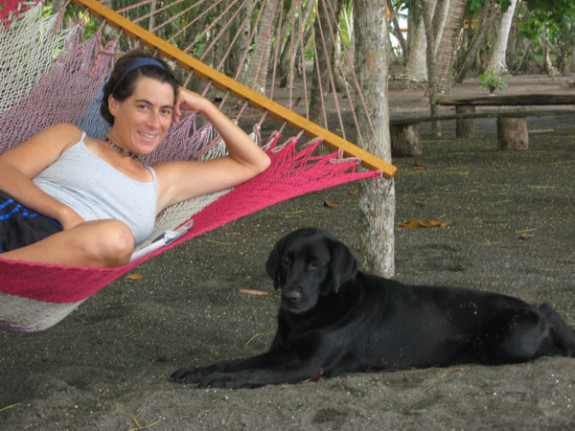 The author conducting research in southern Costa Rica with a local black lab, Bosque. Hammock-testing is a common full-time job in Costa Rica.

When working for the best boss I’d ever had, doing creative and satisfying work that paid well, I quit my job.

From the my office window, I watched red-tailed hawks hunting and mountain bikers riding single-track in the foothills. I longed for more.

It was time to walk away. I’d ended a 10-year relationship and sold our house, and I felt free to try something new. I strapped a gigantic blue tarp over my car and parked it in a friend’s backyard. Plans were laid, adios parties were thrown; I packed up my bike and my laptop, and moved to Costa Rica.

I spotted an ad in the coastal bilingual newspaper, The Voice of Nosara.

I chose a tiny town on the Nicoya Peninsula with a reef-free beach, where I could learn to surf and maybe find a new career. I was open to starting a business, but I had no idea what. I considered hooking up with an American mountain-biking couple who wanted to build bike parks for adventure tourism, but the venture ended up lacking financial sponsorship and they returned to the U.S.

I thought maybe I’d seek a position with one of the many yoga retreats, but that seemed bourgeois and didn’t allow much integration with the Ticos, the locals. I hoped to continue working with design clients from home, but that wasn’t going to be enough to support me.

Costa Rica is a great place to get involved with saving the sea turtles, but I have no biology background. Also, I wanted to speak Spanish in Costa Rica, and English was the common language in many ex-patriot owned businesses.

Through friends from yoga and surfing, I was introduced to a Chicago ex-pat who’d hung a shingle as the town’s only graphic designer. He was self-taught and made band posters, T-shirts and re-designs of clip art logos with an ancient bootleg copy of Corel Draw.

I gave him lessons in Adobe software (he had a bootleg Creative Suite but didn’t know how to use it), and he traded time in his air-conditioned office. I used the space to blog, Skype and email mostly, since I didn’t really have clients calling on me.

I was lacking a creative outlet in my life, and I’ve always wanted to write.

Writing in a non-native tongue seemed a leap too large for this graphic designer, and then I spotted an ad in the coastal bilingual newspaper, The Voice of Nosara. I applied via email for a reporter job. No real experience necessary, I got it. Just like that, I was a writer.

It was very much a Costa Rican experience to me—I’d met people from various countries who’d become something else in Costa Rica, from surfing instructors to school teachers to photographers. If you could imagine it, you could manifest it as a career.

I still loved being a graphic designer, but I believe we creatives must be creative about job-finding and building our quiver of marketable skills. Writing was super hard, but oh-so-satisfying to see in print or online.

When I returned to the U.S. in the middle of the economic crisis, friends warned me that gainful employment would be less plentiful than when I left. But I was refreshed creatively and invigorated by my new career trajectory, and I was able to find writing gigs, as well as design jobs.

I was rewarded for walking away from a good thing.

I stepped back into my previous life with a new perspective, a new appreciation of the view from my window.

Cristina Olds won the Carbon County (Montana) spelling bee by guessing how “ohm” was spelled. She lost at the State level on “austere.”

By day, she’s a graphic designer, and by night she’s a teacher at the University of New Mexico Continuing Education. Around the margins of these jobs (and in between many hours of outdoor play), she writes for various local publications about people, the outdoors, books, art, travel and her dog, Butter Cookie.

View all posts by Cristina Olds →