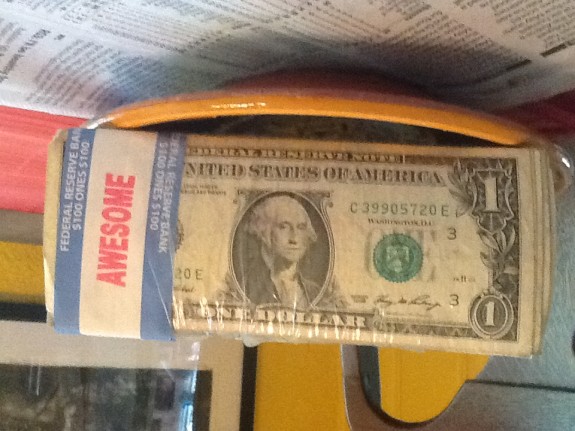 My grant money from the Awesome Foundation arrived as a thousand one dollar bills wrapped in plastic.

In 2012 I was temporarily contracted to work at Zulily in Seattle as an Assistant Photo Stylist in the editorial department.

Lots of time and focus there goes into making perfect homepage photos. It was a dream job, with many perks and cool people, in an artistic environment. But months of working 40 hours a week, and getting home via public transportation around 8pm, then up at 6am to do it all over again, left me creatively fried when it came to my art career. This was not the life I had envisioned for myself.

Plenty of people feel this way about their lives, even if they do like their jobs and make lots of money.

He said I must go for crazy. Keep crazy ideas at the top.

I was driving through Venice Beach with a friend, looking at all the houses and said, “Man, how do all the people just afford to live here? I don’t get it.” He said, “They have jobs.”

For many people with specific milestone goals or families to support, making lots of money is a perfectly fine incentive to get up in the morning. For me, I get depressed after a while if I’m not doing what I feel like I was born to do. All I can see is far into the future when I’m dead and didn’t get to make the artistic impact I wanted to.

So I did what nobody ever does: I hired a New York-based artist consultant.

I wanted help refocusing my energies and building more quickly toward prosperity. Paradoxically, I had money to pay him because of that nice job at Zulily.

Over the phone, Brainard taught me about the merits of dreaming crazy-big, and helped strategize. He was amazing, and knew just the right questions to draw my own answers out of me.

He asked me what I ultimately wanted out of an art career. I told him I just wanted to make big, great stuff happen; to sell paintings; and to be thought of as a creative consultant, myself, sometimes. Then I told him how I want to create a town that—all biological ethics, legalities and consequences aside—employs mostly bio-engineers and artists to create new varieties of life by reconstructing DNA, swapping around information.

And he said I must go for crazy. Keep crazy ideas at the top because that is a force that will carry me along in my career.

We talked for a total of three times, at $100 per hour, billed through PayPal. I only had two half-hour sessions and one ten-minute session, but apparently that was all I needed.

I won’t go into every bleeding detail of our exchanges because they’re specific to my own goals. I paid him for his brain-time and attention, but he basically got me to a place where I had a little lump of ideas, resources and confidence to do a better job of seizing opportunities. If I hadn’t called him, I would not have found myself prepared to apply for, and win, a last-minute artist grant. 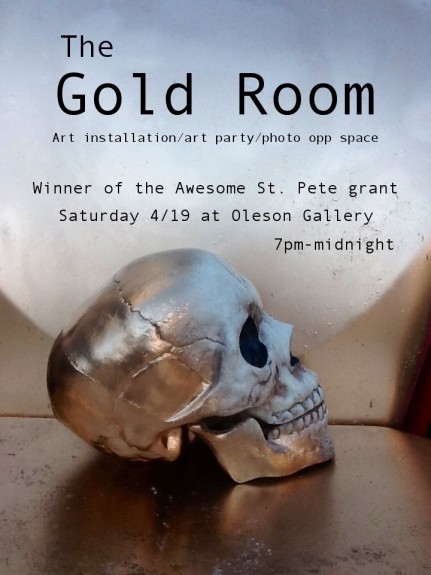 I took this photo in Albuquerque, knowing I would one day I would put text on it to use it as a poster for the Gold Room in Florida.

It’s less that he handed me concrete opportunities than that he was like a doctor helping my body heal itself. He used his knowledge and experience to help steer me toward my own plan of action. And that’s all anyone needs, ultimately, if we’re going to do this art career thing on the illusion of solid footing.

Since then, I worked at AFA, in New Orleans, where I learned how to better sell art, and then got a design internship at SITE Santa Fe. I am creating a new body of work for an art show in the middle of the French Quarter in New Orleans. I got my first artist grant, from the Awesome Foundation, to construct The Gold Room, an installation/photo-op space in St. Pete, Florida, in April.

That’s starting to sound more like my idea of a dream job.