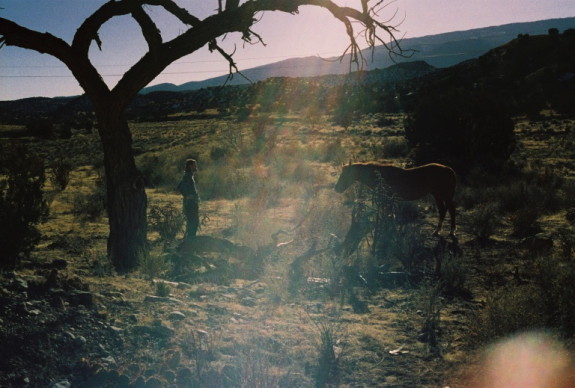 I first saw AJ Woods play at a house party at Chris Dudley‘s house a few years ago. (In fact, Chris’ house parties introduced me to a ton of amazing musicians, which really deserves its own blog post.) AJ plays folk rock songs that are somehow both timeless and evocative of an earlier time; I’m not sure how he accomplishes that. I suspect it has a lot to do with his innate ability to perform in an utterly heartfelt and intimate way.

In a town where you can’t swing a dobro without hitting an Americana player, AJ has managed to carve out a sweet spot for himself, playing with the likes of Wildewood and releasing some excellent videos with the Gold House Sessions folks. It’s great to see his music career thriving, and I’m super excited he’s part of the Pyragraph ReLaunch Variety Show lineup.

Solo. I write songs and play guitar. I play everything from living rooms, bars, coffee houses, parks, and outer space. I often find myself taking difficult and painful things about life and try to make them beautiful through songs. The songs are just expressions.

To me making a song is like creating a sculpture or painting a landscape. Words and sounds somehow convey meaning. There are little stories tucked in there too and it’s just nice to share these kinds of things with the world. There’s something human about creating things and presenting them in a way that you feel good about. The feeling that you get from connecting with an audience is priceless and instinctively satisfying in some way. It’s pleasing for me and hopefully for the listener also. It just feels like the right thing to do.

My most recent album is available on cassette…it’s also yellow, like a sun beam.

I started playing guitar in a pawn shop in Albuquerque called One Eyed Jack’s on Menaul and Eubank. A redneck named Randy taught me how to play “Free Bird.” The guy that replaced him was named Dave. He lived hard and had to sleep with a radio speaker pressed up next to his left ear drum to dull what he called “a high E note” that he earned from blowing his hearing at live gigs and prolonged cocaine abuse. He taught me 12-bar blues and I learned to love Jimi Hendrix. He died while I was learning from him; I missed the funeral.

Winning’s open mic was my first gig. I was so nervous after one song that I couldn’t move my hands; they were locked in place.

I try and see The Handsome Family every chance I get. Wildewood is right up there too. I try and see them play as often as possible and I am very fortunate when they play with me. I like Townes Van Zandt, Leonard Cohen, Neil Young, Howlin’ Wolf, Johnny Cash…all the greats really.

I think Tom Russell is pretty incredible. He did this song called “The Ballad of Edward Abbey” that will will send a chill down your spine. I love good stories. My friend Mike Smith does this thing called New Mexico News that’s just incredible. He recently introduced me to this show called “Welcome to Night Vale,” a show about a fictional southwestern town that truly reminds me of home and life here in general.

Other than that, I’ve been listening to the Roy Orbison’s Greatest Hits cassette on repeat. Also, my girlfriend just bought The Velvet Underground & Nico on tape. We listen to that one all the time. Tapes are so cheap to buy. You can get great shit for next to nothing. My most recent album is available on cassette…it’s also yellow, like a sun beam.

Present yourself honestly, play the best you can all the time, and remember the people who help you out along the way. Stick with the people who want to see you succeed.

You can hear more of AJ’s music at his Bandcamp site, and order his yellow cassette tape from Tinyamp Records.