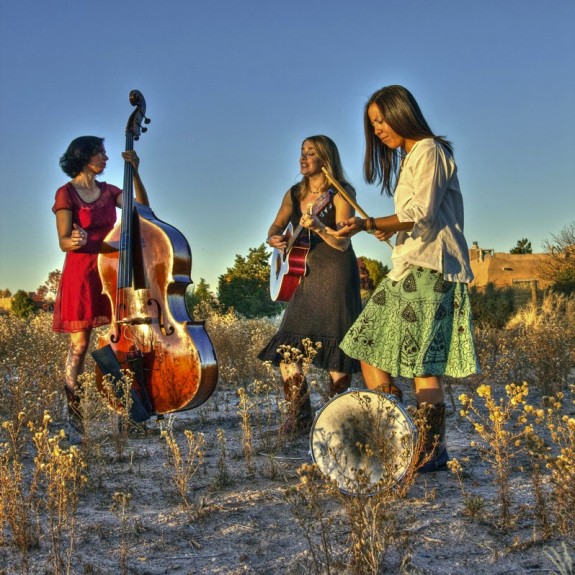 I’m telling you, people, Floozy is fun. I’ve played a few shows with them here in Abuquerque and never fail to enjoy their energy, their spark. The last show we did together was an all-women Lou Reed tribute—at the end of the evening when every single one of us was playing on stage together, it was just so indescribably enjoyable.

This is a band with spirit. Moxie. This is a band that has claimed to aim to reclaim the word “floozy” and is doing so. I can’t wait to play with them again at the ReLaunch party here at the end of the month.

Carve out some time every week for writing and revising new, original tunes.

Floozy is a time-traveling, fun-making music machine. Our acoustic indie three-piece girl band features guitar, drums, upright bass, yummy harmonies and the occasional spoons, banjo and glockenspiel. Our debut album is called Open Can of Super Days, and we’re at work on a second one.

Hmmmm…I think it had to be one at a local club where we were slated to play at about midnight on a school night, so there were about two people there. Something was going on with the monitors that made it sound like a tsumani was rising below the stage to wash us all away. The moody sound guy fixed that, and then we were slapped by a salty wave of Why The Hell Are We Doing This.

Carve out some time every week for writing and revising new, original tunes.

Oh, and check this out. We just got back from South by Southwest in Austin. We ran into Pat Sansone from Wilco. He likes the name of our band.