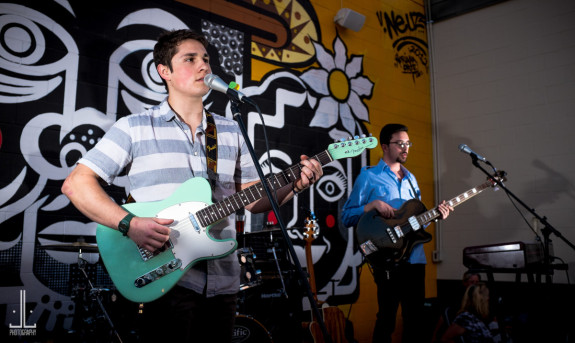 I just saw Kevin Herig and Kyle Ruggles play a couple weeks ago at the Marble Brewery to a packed patio, on one of the first warm nights this spring. People were dancing, the beer was flowing, and Kyle and Kevin kept the music going all night long, on several different instruments and some guests sitting in. They made it look easy, which may have something to do with them being music instructors by day. Among other teaching gigs, they both teach guitar at Rock 101, a music school for kids and teens (with a great summer program, by the way) founded by Kevin in 2011.

In short, Kevin and Kyle’s set at Pyragraph’s ReLaunch shindig is going to rock. I asked them, What’s Your Deal?

Nearly every gig we get asked what we call ourselves, and every time it’s the same response, “I’m Kyle Ruggles, and this is Kevin Herig.” We are two solo musicians who come together, more often than not, to share songs and gig around. I’ll back him, then he’ll back me, I’ll play this instrument, he’ll play that instrument, and we just keep moving around the stage like that until one of us gets dizzy and tangled in mic cords and falls down. This always disappoints the audience.

One day as a young chap, I just started singing. Then I learned piano. Then I learned guitar. What started as a way to impress my peers turned into something I couldn’t keep a lid on. Later on, you’d find me everywhere, barefooted and with a guitar strapped to my back. I’ve never not been thinking, dreaming, and drinking music.

Kevin fronted a band called Asper Kourt his freshman year of high school. They were young and famous by Albuquerque’s standards, and the group’s talent culminated in a West Coast tour wherein I joined to play bass.

The band went their separate ways, but last December, when Kevin released his debut solo album, Give It All Away, everyone came back to lay down their respective ditties.

For each of us, being solo musicians doesn’t mean loneliness. We are always collaborating with each other and other local groups, like the players from Wildewood and the guys from The Lymbs.

As you might expect, all our gigs have been pitch perfect. I could gripe about a few audience members who didn’t applaud, but for all I know, their thumbs were broken.

If you are able to, teach. Teaching both spreads the knowledge and solidifies techniques for yourself. Music is the opposite of loneliness. Get out there and share your time with others. Musically.