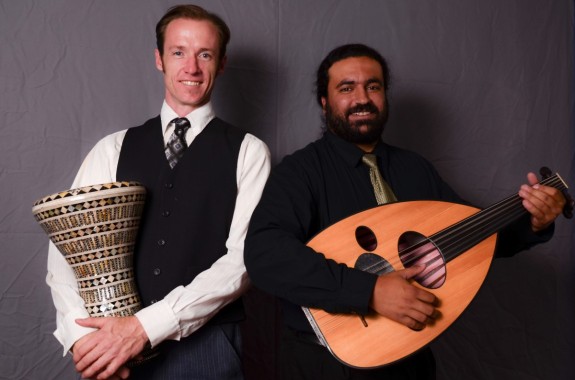 Frank Bramlitt and Erik Teixeira of The Khans.

I first heard Frank and Erik a few years ago while sipping chai in a vegetarian restaurant in Albuquerque’s North Valley.

That day they were appearing as the four-piece Sadaqah. I was astonished. Stuff like this happens in Albuquerque? Their music was enchantingly beautiful and totally exotic to me. I’ve run into Frank and Erik several times since—sometimes they play as a duo, sometimes they’re accompanied by bellydancers.

Whatever their band’s configuration, I’m always happy to hear their music. They’ll be opening the festivities at Pyragraph’s ReLaunch bash so be sure to get there early (8pm) to check them out.

We are The Khans, performing Maqam music, aka “world” music, on the Oud and Darbuka. We mostly perform music of the Persians, Arabs, Ottomans, Africans and Americans. Our primary function is to stimulate Tarab. Yes, it’s okay if you Google this stuff.

Despite this rough start, the dancers didn’t hate us, the show host booked us again, nobody died and the Khans were born.

We started our musical careers in western theory. Both of us have played trombone for tens of thousands of people. Erik is the only guitarist. Frank is the only organist. We both love to play music for dancers.

Our first gig was definitely the worst. A TV station thought it would be nice to feature a band with dancers for a one-hour show. At the time we mainly performed as members of a four-piece ensemble. However, we, Erik and Frank, were the only band members to show up and had to pull it off as a duet.

As we stumbled through our first performance without several key instruments, we were also performing with dancers who had their own issues to contend with. One dancer was locked out of building and was finally let into the studio only to have childcare issues and then tripped over cables while we were on air. Another dancer, who shall remain a nameless darling, had to wear an eye patch for the duration of the performance which made her look like Claus von Stauffenberg.

Despite this rough start, the dancers didn’t hate us, the show host booked us again, nobody died and the Khans were born. Things get better as time goes on.

Remember: “Find what you love and let it kill you.” —Bukowski. Also, “the greatest happiness in life is to vanquish your enemies.” —Genghis Khan