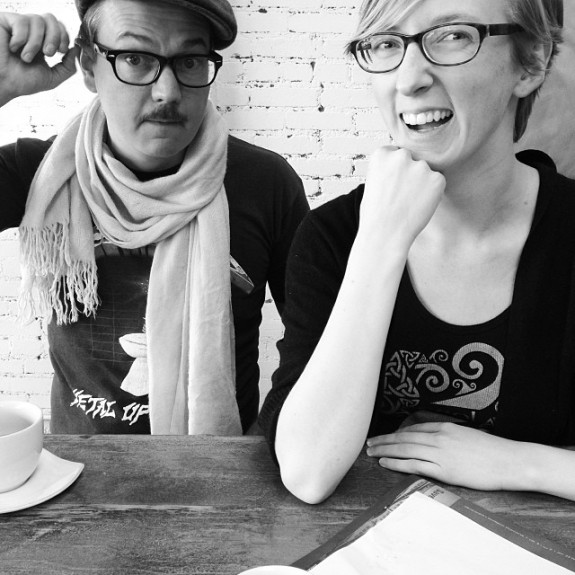 If you need stimulation of your happy gland, look no further than Sage & Jared’s Happy Gland Band.

Sage and Jared make me happy just looking at and being around them (Sage has been my kids’ babysitter for a few years now, plus she wields editorial awesomeness at Pyragraph; my kids are friends with Jared’s kids; I could go on), but hearing them play music together makes for mega happiness.

Before the Gland Band formed not quite two years ago, Sage Harrington was already a well-loved singer-songwriter in Albuquerque, both solo and with various other acts. Her voice is just plain arrestingly beautiful and her songs are funny, some darkly so (“You Are a Terrible Person” comes to mind), with progressions and melodies that remind me of Regina Spektor (whom Sage sometimes covers, and so, so well).

Jared is the bass player in the perennial favorite filthy mangy jazz band from Albuquerque to Kazakhstan, Le Chat Lunatique. Jared also writes darkly humorous songs about love, death and cockroaches, so he and Sage were destined to join forces, with an assist from two tiny dogs with pink hair.

Sage and Jared’s Happy Gland Band! We are awesome because of reasons. It probably has something to do with the ukulele, the upright bass, the singing, the singing chihuahua, the supper, and the other dog with the gaping, rotten maw and pink mohawk.

Sometimes our background is a nice, neutral taupe. Sometimes we opt for a lively neon orange to lift us out of the doldrums, during those rare cloudy Albuquerque days. The majority of the time, however, I go for the ’90s laser beams (example) while Jared prefers a green screen, so he can project whatever he likes on it, thusly.

It was an early spring morning in 1982. We were still recovering from the show the night before playing for the Pinball Machine Workers Union Local 409 Biannual Convention in Olathe, Kansas. It was a great show but we all had a few too many Zima and Creams. We were at the Johnson County Executive Airport prepping the Happy Gland Dirigible for what should have been an easy flight up to North Platte, Nebraska for the third annual Wig, Toupee and Merkin Workers Association Gala Event.

“We just need to kill the other engine, release some hydrogen, and set her down gentle in the nearest clearing.”

Sage had just finished checking pressure levels in the rear ballonets, and I had just completed the preflight checklist for both engine nacelles. Everything appeared to be in proper working order. We were cleared for take off by air traffic control at 8:50am. The wind was in our favor as we untethered our trusty old airship and rose skyward. I started the propellers and we set a course northward as the morning sun shone through the starboard portholes, warming our tired bones.

George Michael, our tiny shivery chihuahua, found a small oval of warm light on the floor and made it his own. Daphne, our other dog, wheezed. We had been aloft for no more than an hour when, just as Sage and I were finishing signing a pact to never drink Zima and Cream again, we heard a loud POP. It had come from the engine on the port side. We looked out the porthole and to our horror saw that the propeller had seized up and was billowing smoke!

I panicked and started screaming and breaking plates over my head, but fortunately Sage kept a level head.

“Get a grip!” she implored. “We just gotta set her down! We’ll get through this!”

“You’re right.” I said setting down the Falcon Crest commemorative plate I was just about to smash against my skull. “We just need to kill the other engine, release some hydrogen, and set her down gentle in the nearest clearing.”

We scanned the ground below us and saw the perfect spot. We were descending a little too fast for our liking but we finally got her under control and actually made a decent landing, considering the circumstances. The clearing we were in was actually a large courtyard in what appeared to be a university of some sort. As we disembarked down the gangway we saw a man with an eyepatch walking towards us. He walked up to me and held out his hand to shake mine but missed.

“Welcome to the New South Heathrow School for the Blind in One Eye. I am the Headmaster, Dr. Plimothy Danderfield-Ortega.

“Pleased to meet you, Dr. Danderfield-Ortega,” Sage offered. “We are Sage and Jared’s Happy Gland Band. It seems we have had a minor engine catastrophe, but were fortunate enough to find this courtyard to make an emergency landing. We mean you no harm.”

When you’re cashing the checks, you forget about the little birdies and whatnot.

“Well you see, tonight just so happens to be the night of the New South Heathrow Sadie Hawkins Dance, but the band we hired cancelled! They are called ‘Lola and the Primates’ and they specialize in what they call ‘Grungyachi’ which is a blend of grunge and mariachi. But they just called and said they won’t be able to make it because they all have mono. Does Sage and Jared’s Happy Gland Band play ‘Grungyachi?’”

“Of course we do!” we said. “Asinine musical genre mashups are our specialty. Although, we are not sure what ‘grunge’ is. Are you sure it has been invented yet? It’s only 1982….”

So we ended up playing the gig. The entire school seemed to have a great time, but we had some sound issues: There were WAY too many mids in the monitors and Sage’s mic stand was stripped. WORST FUCKING GIG EVER!

Well, the Aluminum Corporation of China (ACC) is always a strong performer, and a great member of our portfolio, currently. Wouldn’t think of getting rid of it, except for, you know, the despicable use of energy and water that goes into shifting all that earth around and destroying all that nature just so all that cash can be shifted around, too, from the poor to the not-so-poor, to the not-at-all poor, like us. But when you’re cashing the checks, you forget about the little birdies and whatnot and just buy the securities, liquidize it if the time is right, convert it into bullion, and seal it away in your Swiss bank account. But I digress.

We were really into mortgage-backed securities until we realized they had become toxic, which was unfortunate. Tesla, too (TES), ranks up there. (Not this Tesla.) Really, though, my pet performer (which is doing fairly well at a decent enough rate of growth) in our portfolio currently is Integrated Dirigible Exteriors, Interiors, and Internal Systems Incorporated (IDEIISI).

People are always down on boring, boring bonds—I actually like to use bond facts to drive away unpleasant people at meet and greets at our sold-out stadium performances—plus, they make me feel really patriotic inside, just like the USO girls do. I just want to dance some American dances when I think of the bonds.

Most valuable tip anyone’s ever given me: Always bet on the fourth horse from the left in the third race, but only after the appropriate number of Pimm’s Cups, which will be different for each individual. This is an art, not a science, and therefore completely unexplainable. You just have to get pretty drunk, that’s the main requirement. Also, you could just bet on the one with the stupidest name.