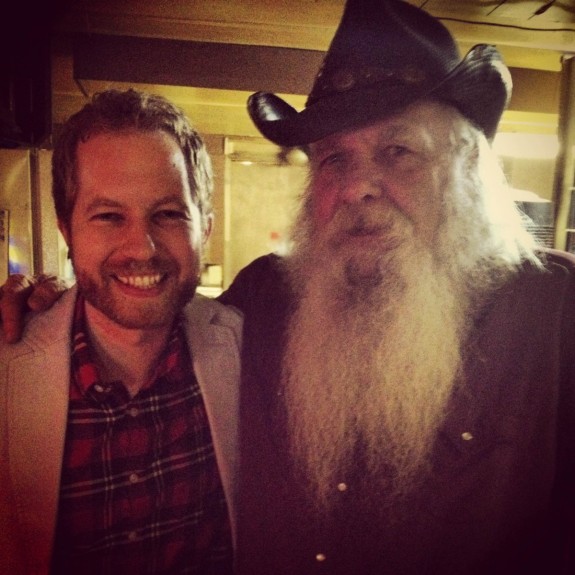 “Santa” from Santa’s Pub in Nashville, and me.

You are not in a kindergarten classroom learning this concept for the first time.

Although, many of us act as if this idea is completely new to us, or as if the notion of it has never crossed our note-riddled minds to begin with.

Have you ever filled in for one of your musician friends when they couldn’t play a show? Have you ever scored a great opening slot for a national artist? Played a spot in a music festival? Written a song with someone and then that person pitched the song to a music supervisor and got the song placed in a movie?

Chances are, if you answered yes to any of those questions, you didn’t get the opportunity purely on efforts of your own. You have to know other musicians to get referrals for paying shows. You have to make friends with a manager/booking agent/venue promoter in order to get an opening slot on a bill for a national artist. You’ve probably had other artists/venue owners/booking agents/managers/journalists give your name or recommend you to a festival planning committee…and you obviously can’t co-write a song without a co-writer.

The people on staff at the venue where you’re playing are invaluable when it comes to an invitation for a repeat show.

I’m positive that even as you read this post you can think of opportunities you’ve had in your own journey that would not have been possible without the friendships and musician network you have. Some people are better at networking or “schmoozing” than the rest, but that shouldn’t be an excuse. We all have the ability to be the kind of artist that we would want to work with ourselves. We all like artists that will give their time and energy to help out a new act, or will do shows for nonprofit organizations, or that will give studio advice to younger musicians. So, if those are the types of artists that we like, are we working to be those types of artists?

Here are some suggestions you can use to make some new connections.

1. Offer to bring a band/artist you like to your hometown to play a show with you.

Your act can probably draw more people than the other band can in your hometown, so if you like them, do them a favor and have them come play with you so they can make some new fans. The worst thing that will happen is that your fans will be introduced to another good music act, but the other act might invite you back to their hometown to do the same.

2. Offer to play a show for free at a venue if they’re hesitant to book your act.

We all know musicians who make a bad name for the rest of us, so some venues might be a little gun shy when it comes to booking a new act. If you really want to play a venue, (I’ve experienced this method first-hand) put your money where your mouth is and tell them that you’ll play your first show there for free to show them what kind of crowd you can pull. If you deliver, chances are that the venue will take notice and it will be much easier to book a show there the next time around.

This one is absolutely a no-brainer. At the very least, you’ll build your songwriting skills with workshops or meetings, but you’ll also end up meeting songwriters from all over your region—and each one of them has their own network of friends and musicians that can lead to exponential opportunities.

4. Leave the best tip you can for your bar/wait staff.

The people on staff at the venue where you’re playing are invaluable when it comes to an invitation for a repeat show, and you probably hang out with them between sets! Make sure you they know that you’re easy to work with, and that you’re a team player with the venue. One of the best and easiest ways to show that is to leave them a good tip.

I met my publisher while I was attending a conference hosted by a music magazine, and he was on a panel discussing music in TV and film. When it came to the end of the panel, I thanked him for his time, and had nothing but questions for him. After he told me a good deal of his story, he naturally asked me some questions about who I was and what I was doing there. Eventually, the conversation led to a long, and fruitful relationship, but it all started with the fact that I didn’t charge in and try to rattle off a resume to him, but actually got to know him as a person and was interested in what he had to say.

Whatever the situation may be, I’d encourage you to be eager to get in a community of musicians/music people. You’ll grow, you’ll be able to share with gift with other people who will certainly understand and appreciate it, and you might even get some new irons in fire.

Matt Jones is a singer/songwriter, and has had a full-time career as a solo artist for about seven years. He previously had a rock band that, while determined and talented, fizzled out about a month after it had an opening slot for Rod Stewart and an untimely purchase of a dog by its lead guitarist’s girlfriend.

“I’ve learned a lot during my musical journey, but also realize that I have much to learn. I hope to convey in my posts that I’m excited to educate myself (and others) about new resources for the business side of music, and to encourage ideas for the development of the art form.” —Matt Jones

View all posts by Matt Jones →