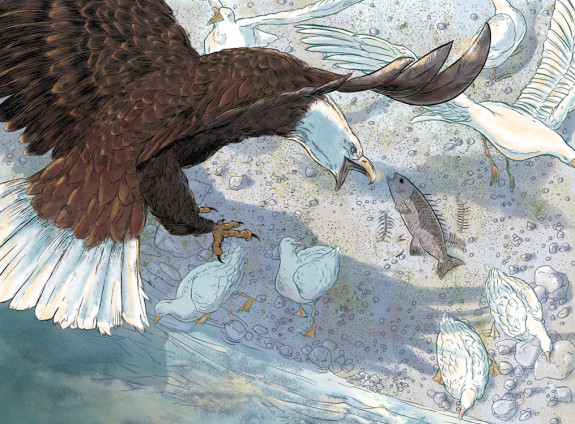 Detail of an illustration I did for Cricket Magazine.

You are not likely to succeed. You have to be a little bit delusional even to attempt it. It’s one of the most competitive industries there is. The likelihood of having a career in illustration is about the same as having a career as a Hollywood screenwriter or successful actor, but you will be paid a lot less. Pursuing an illustration career in publishing is that much harder.

If you’re smart you won’t go any further. You should really consider becoming a high school art teacher or going into a different profession altogether. Have you considered a career in occupational therapy?

Since agents take a percentage of your fee, you’re better off if you can manage on your own.

Freelancing provides no benefits and little job security. Unlike other forms of freelance work like advertising, publishing can provide a greater degree of creative freedom and a greater sense of ownership — but less pay. While all commercial illustration is a collaboration, in publishing there are fewer cooks in the kitchen: an editor, art director and, typically, a single publisher or supervising editor rather than a huge team of artists, writers and corporate bigwigs.

Freelancers in publishing often create works-for-hire (work owned by the corporation they’re working for) but they are responsible for every aspect of the image, from sketch to completion. In publishing, unless you’re working on-model (a franchise property that has to share a consistent look throughout the product line) you can recognize the final image as your own. In staff positions, the end product is the result of many anonymous hands.

Are you still here? OK, well since you’re sticking around, let’s look at one type of freelance illustration career in publishing: editorial. In the next two weeks I’ll cover comics and children’s books.

A certain amount of business acumen is very much a necessity. You must be reliable, meet deadlines, and form solid relationships with clients. You must be nice. You can get an agent to handle some of the business end, but since agents take a percentage of your fee, you’re better off if you can manage on your own.

You must constantly promote yourself. You must have a consistent style — but styles can fall out of fashion, and this is an ever-present risk. Everything orbits around your work. You must work long hours alone. Even when you’re not working per se, you have to continually maintain your craft by drawing in sketchbooks and doing personal projects. You must stay competitive, constantly. There is new blood entering the field all the time. This applies in general to all freelance work, but no more so than in editorial.

You must scramble for the few low-paying jobs you can find and will barely be able to sustain a livable income. You will need to get a day job to make ends meet.

Through dogged self-promotion, hard work and luck, your work is in demand. Clients hire you because they want your distinct look. You get more lucrative work and a white-collar income, and are celebrated by students and peers. While people outside of the illustration world might recognize your work, they’re not likely to know your name. Licensing, freelance advertising work, or anything that calls upon you to lend your unique look to a mainstream product is going to pay very well.