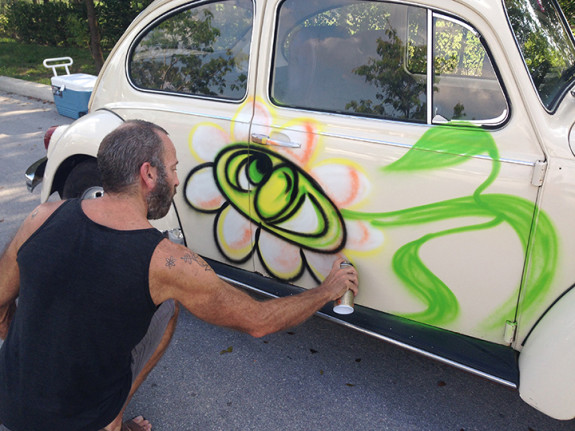 If I had to choose just one thing that I love most about art, it would simply be artists themselves.

Recently, I was floored to have the opportunity to spend time with renowned Pop artist Kenny Scharf as he painted his distinctively unique, colorful-flower-faces onto my 1969 VW Bug for a new series titled Karbombz! While I may have been Kenny’s 87th Karbombz! victim, I was also conducting my life’s research.

You see, I’m fascinated by the way artists navigate their own creative forces; how they live, work and falter. My graduate studies revolved completely around this mythos; the theme seemed to find me rather than me finding it. Often by chance, or perhaps by some cosmic fortune spawned by my habitual “art hero addictions,” I seem to meet more and more inspirational artists as time goes by.

It’s so compelling to observe the process of creative ideas transcending into enigmatic artwork.

I’ve been lucky to personally encounter fascinating, popular artists since I was young. With the likes of Warhol’s Factory to Hollywood personas and Reggae Royals, I’ve somehow managed to be a magnetized but welcome fly on the wall.

So it was again while I watched Kenny Scharf work.

I passed many hours with Kenny as he generously donated his talents and time to Davie, Florida’s Young At Art Children’s Museum Celebrating 25 Years Gala, a fundraiser for the nonprofit’s programming. I caught him spraying people’s clothes (of course while being worn), notebooks, bikes and nearly anything else that they begged to be tagged. He did this work with amazing speed, without complaint, and few breaks, outside in the beating South Florida heat. 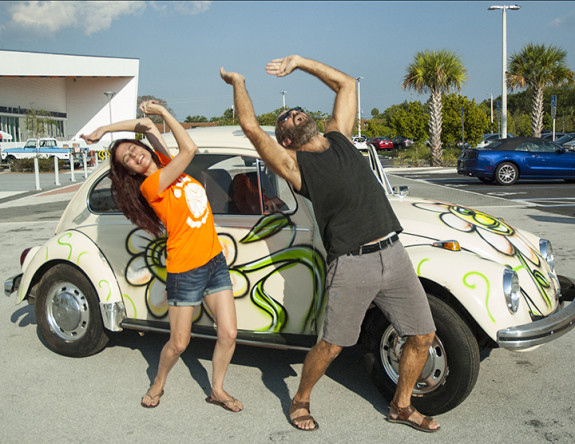 Me and Kenny posing in the wind with his wavy, eyelash-batting flower. Can’t believe she is MINE!

Kenny is one of the biggest-hearted artists I’ve ever met.

Later in the weekend, he reconvened in Miami’s Wynwood Arts District and continued the bombing, for friends and strangers alike. He produced so much seemingly priceless work in those hours, that I can only deliriously imagine what he can concoct when he has access to a big wall or space to build his large-scale installations.

In addition to creative flow, Kenny accomplishes much through extreme discipline and heightened focus. I watched him repeat the same personal art processes numerous times in multiple situations, yet each had stellar originality and no two were the same. Looking inward, I realized that whenever I embody similar qualities, I get %@# done too!

Much of the time, he was “in the zone,” and may not have been aware of onlookers, talk, weather or other distractions, aside from when his spray can was empty and didn’t give him the right result. At the same time, he’s open to approach, and transitions repeatedly in and out of this zone as rapidly as he paints (almost too fast to take a snapshot). He feeds off the surrounding energy, likes suggestions, and refuses to work on anybody’s “something” without human interaction first.

At one point I commented on his skill and certainty, and he replied with something like, “Well, after 40 years….”

Kenny has been doing this type of painting for so long, he nearly invented it.

An integral part of the 1980s East Village NYC art scene, he is quite unlike many participants from that time of excess: He is alive and well. We can all learn something from Kenny, who is not only an accomplished creator, but a humble, intelligent, bright survivor, and leader who pioneers Pop Art to an all-new realm. This was proven repeatedly all weekend, by the numerous young fans and collectors who excitedly greeted us, full of admiration and praise for Kenny’s whimsical work.

As for me, this is epic art. And life. Come June, when YAA’s wonderful exhibit comes down, yours truly will be bringing home a special piece of art mythos made just for me, by the big-hearted, colorful People’s Pop Artist of this brave new world. As Kenny Scharf says when it’s done…Karbombz! 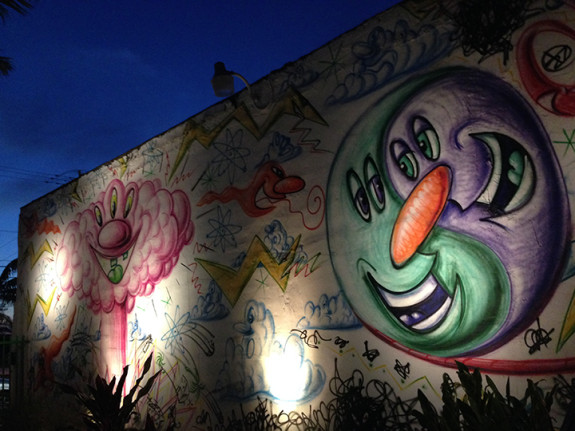 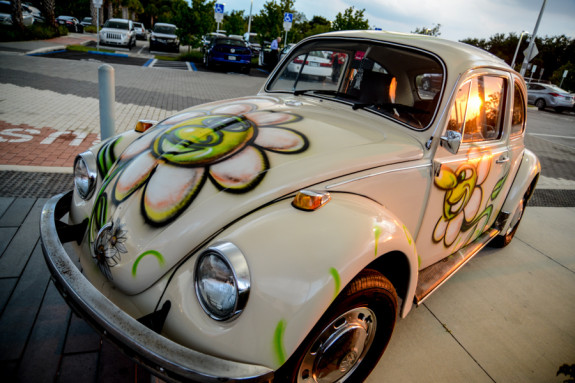 My vintage relic baby in the sunset: 1969 Volkswagen Beetle adorned with Flower Power by Kenny Scharf. Photo by Through the Shutter, LLC.

All photos, unless otherwise noted, by Mariah Fox.