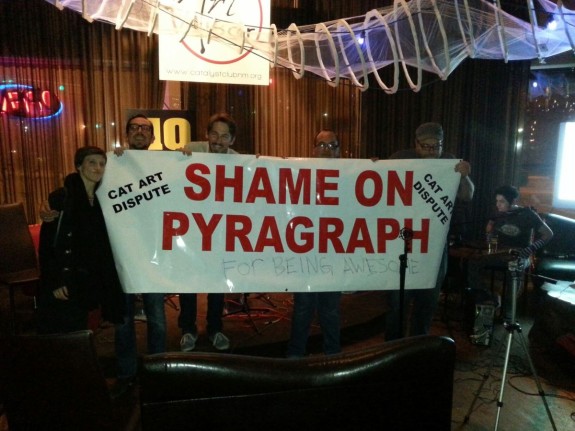 A dust bunny blows across a lane in my laptop’s keyboard. Ennio Morricone plays over the café’s speakers.

Such was the mood when I sat down to write a somewhat hateful article for Humbird NM, an arts-promotions online mag I co-run with Jeremy Kinter and Kyle Ruggles out of Albuquerque. The subject of the hateful article was Pyragraph, who, though their reach is global, is also based in our desert city.

The article has since been removed (we made up at Pyragraph’s relaunch fundraiser after beating the shit out of logoed piñatas), but the gist of it was the following: “Alas, Pyragraph is a brute who is maltreating a certain rejected blogger, and we’re going to gripe about it with an air of pseudo-significance and tattletale ethics.” This article would become the catalyst for two-and-a-half weeks of online feuding between Pyragraph and Humbird complete with online scoffs (you have to sound them out), name-calling and a tug of war over the disputed blogger.

Our feud was a measured plot to outwit a new Facebook algorithm that stunted our readership.

We’d conspired it together, me, Jeremy, Kyle and Pyragraph’s founder, Peri Pakroo, as a Jim Rose-ian sort of scheme. (Jim Rose once got the big five news networks to run a story about himself, groundhogs and monkeypox. The story was fake; the exposure was not.)

Though it was definitely immature, our feud was a measured plot to outwit a new Facebook algorithm that was stunting our readership by limiting the number of people our posts would reach. Facebook is a huge marketing tool for online promotion, which is essentially what each of our websites relies upon, and when it decided to hack away the legs we’d become accustomed to walking with, we decided to use it for its most-pined-for capability: drama.

The fact is, the primary subconscious response to those who go on and on about good things that are happening to them is, “Good for them.” This kind of talk unfortunately doesn’t have the gravitational pull that bitching does, i.e. the status update:

“OMG. I can’t believe that just happened to me!”

To which Joe Shmoe responds, “OMG. What happened?” and Bessie Bull comments, “OMG. Call me right now,” and so on, and so on.

Although the joke of the feud didn’t go over as straightaway as we’d hoped, the response was as expected. People came to the defense of Pyragraph, the called-out party, the bullied, and quickly negotiated a distaste for Humbird. We lost readers, I’m sure, lost Facebook likes (more valuable than gold) and received a few one-star reviews.

A dear friend of mine even wrote, from her New York City apartment, a 200-word comment under one of Pyragraph’s affectedly confused statuses, calling out me and my constituents as being solely out for ourselves and bearing absolutely no resemblance to the creative hub we claim to be.

The point is we are out for ourselves. We have to promote ourselves first and foremost as artists and as champions of local arts. We have to be a shameless self-promoter because nobody else is going to do it for us. If we’re going to get anyone to listen to us when we say you need to know about this guy, we must situate ourselves as a popular source.

Was it exploitive? Was it dirty? Sure it was. If we hurt anyone’s feelings or caused real-life scoffs, accept our apology, because that wasn’t our goal. As it becomes easier and more attractive for people to become artists and performers and altogether disassociate with the unappealing system former generations adhered to, it becomes harder to navigate the waters. We aimed for a quick dose of entertaining infamy; we went for popularity, crossing our fingers that reputability wouldn’t fall too far towards the wayside, that it would exist based on the merits of our product.

Guess what? It worked.

Each of us should be a marketer first and an artist second if we want to be successful. Resourcefulness, cleverness and downright naughtiness ought to be greater tools than paintbrushes and microphones. In other words, if the artist is a submarine navigating the vast and burgeoning waters of creativity, it’s definitely a good idea to bring a periscope and a parasail. If we don’t, well #shameonhumbird, #shameonpyragraph and #shameonyou.