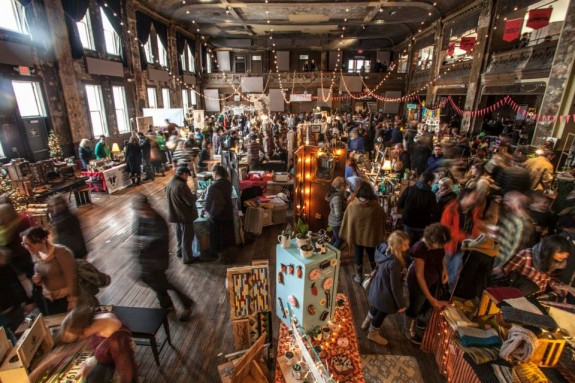 I am now entering into my fifth year of planning marketplace events that are often called craft fairs.

I am in my 10th year in participating in them. When I first started out trying to sell things I had made, there wasn’t an Etsy, there wasn’t a Facebook—I remember quite vividly that I didn’t even have access to the internet unless I was on campus. And I liked it that way. Now, although I fantasize about days where I am unconnected from the internet and my “days off” from freelancing are indicated by not logging onto my computer, I need it. I like the connection, I like the immediacy, I like the bubble it creates where I know what my “friends” are up to, but I don’t have to actually call all 1,200 of them to find out.

When I first started vending at markets, I was in college and I had no money.

This connection and consequently the disconnect that I just mentioned has changed a lot in terms of commerce for people like me who make things with their hands and try to sell them. The internet has changed it. The connection means that I know quilters from all over the world. Not by their faces, but by their Instagram handles. The disconnect is that unless I post directly to my Facebook account (where my “friends” are generally people I have known from real life at some point) or omg, call someone and tell them about what I am making, people that surround me in daily life—my neighbors, moms on the playground, the kid that makes my coffee—they actually have no idea what I do all day.

This is something that I have thought a lot about. First of all, I know personally that I need to be more self-promoting. When someone asks me what I have been up to, the general answer of “Nothing,” needs to stop coming out of my mouth. Secondly, and more importantly, I wonder what this dynamic has actually done to my community and I have come up with the thought that my community is not better for it.

But I am getting a little ahead of myself.

When I first started vending at markets, I was in college and I had no money. I was invited to make some clothes for a wearable art collective called Fasten. Fasten was run by a few ladies who offered to sell things you made for a very low consignment rate (15%—crazy!) and their goal was to: 1) have enough stuff to fill a 10×10 tent, 2) be able to make a little extra money by making things themselves and selling them, and 3) encourage people to make stuff.

What actually resulted was much more. I became very involved in Fasten and ended up co-directing it until I left for grad school in New York. Now looking back on this experience I value it for much more than a fun hang and a reason to make things, I look as it as my first community building experience.

We made the rules, we created the structure and we didn’t turn people away.

People who were attracted to what we did participated and those people are still the people I depend on when I am creating—an event, an article or an object. Those are my people.

Five years ago this summer was the moment two ladies from Fasten, another BFF we picked up along the way, and I wanted to make an event for people like us to vend at. There was already a big craft fair in town called Art vs. Craft that was run by one of my besties and it was important to distinguish the difference between the two. This event was going to be for makers of all sorts, that were local to Milwaukee and our goal was to create a brick and mortar space that would attract emerging artists and hobby crafters.

I can hear your groans from here!

It’s true! We all individually knew of a lot of people who had never been accepted to Art vs. Craft and wanted the opportunity to vend. What was missing from their applications? A lot. First, established craft fairs looked for websites, professional looking photographs of goods, a well-styled booth set up. If you like to make stuff, but have a day job you probably don’t have any of these things. But what if you make cool shit and you want to participate in a creative community? Well, then you apply to Hover Craft.

Looking back on the creation of Hover Craft, I don’t think any of us would have predicted that we would be now entering our fifth year.

And although we specialize in working with hobby crafters and emerging artists, titles that make a lot of aficionados cringe, the spectrum of goods a shopper found at one of these was wide. The makers we found made all sorts of stuff that was beautiful and high quality, but it was nothing shoppers had seen at other craft fairs or shops in the area or even in online shops. And the vendors we worked with were incredibly enthusiastic and their enthusiasm came from being able to participate.

Looking back on the creation of Hover Craft, I don’t think any of us would have predicted that we would be now entering our fifth year. But we are and every year we can boast that it has grown in quality, number of vendors and number of shoppers.

What did Hover Craft create?

Well, it created encouragement and possibility. Hover Craft acted as an incubator for Art vs. Craft where vendors at our event would move onto the premier Milwaukee art and craft shopping destination of the Christmas season. Were we mad that our vendors would get swooped up? No. Our goal was to work with different makers every year and it helped turn over vendors we didn’t ever want to turn away. And it worked really well.

After doing Hover Craft for a couple years, I started getting asked to coordinate craft events elsewhere.

I met more people and I got to work with some truly enthusiastic vendors that I now recognize as small business owners. I started seeing that there was a need for more vending opportunities and so last year I made another market called Maker Market. Maker Market is the first Sunday of each month May-September in the parking lot of the Bay View Colectivo. And last year I also started collecting email addresses for a newsletter for people who are interested in vending opportunities in the Milwaukee area.

The very obvious goal to creating Maker Market was to create a regular venue for people to sell their work. But there are other goals as well—what happens to our creative community if it is nurtured by giving people the opportunity to create their own small, low-risk creative business? What happens to our creative community if many people are invited to participate? What happens if this all happens face to face? What networks result and to what end? It is these questions that I am excited about exploring as this season of Maker Market goes on and as the years of planning these types of events begin to pile up.

I recognize that I have a significant opportunity because of the network I have created over the years to advocate for a stronger creative community right here in my city and I am going to start exploring that on my blog. This exploration has already started, but it will continue with this book I just got in the mail—The Creative Community Builder’s Handbook by Tom Borrup. I’ll be making semi-regular blog posts about its contents—but if anyone has any recommendations of more books to read I would love to hear of them. Leave them for me in the comment section below, would you?

Cortney Heimerl received her BFA in printmaking and art history in 2005 from the University of Wisconsin at Milwaukee. She received her MA in visual communication from New York University in 2007. Since then, Cortney has co-authored the book Handmade Nation: The rise of DIY, art, craft and design and she contributes articles on art and craft to a number of magazines online and off. She is a Founder of Maker Market, as well as an annual maker fair called Hover Craft that encourages establishing and growing a strong creative community in Milwaukee. Cortney is a mother of two, a wife to one, and her dog is named Watt.

View all posts by Cortney Heimerl →