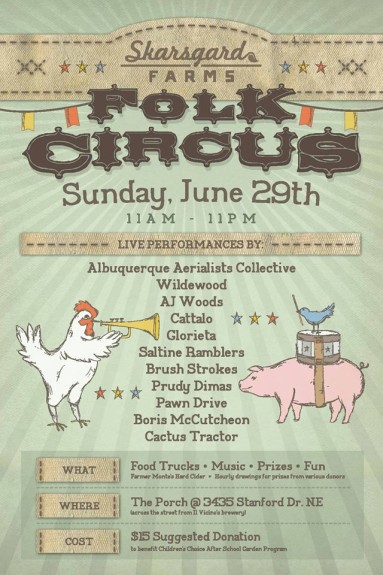 Meredith Wilder is a singer, songwriter and guitar player in Wildewood, one of Albuquerque’s top Americana bands. Besides playing in events she is active in making them happen, including helping organize the upcoming Skarsgard Farms Folk Circus on June 29 (more info at the end of this post). In this post she shares her experience in planning a music festival.

A few months ago some acquaintances of mine and I started discussing the possibility of putting together a music festival in Albuquerque. One key person was Wesley, an organic farmer at Skarsgard Farms who had booked my band Wildewood a year or so earlier for a launch party for Skarsgard cider.

We met a few times to figure out what kind of an event we wanted this to be. Aspects we wanted to incorporate were: family-friendly; all day long; full bands; food and drink; scheduled over the weekend; and in support of all things local. Two key elements needed to be nailed down right off the bat: date and venue.

My job: To find ten bands. In hindsight, I realize I talked to too many people about the possibility of playing.

The cider launch party had been held at the Skarsgard distribution center which can hold up to 500 people. As Wesley and I talked about ideas for an all-day music festival that could hold lots of people, we decided this venue would be ideal. Not being a “traditional” music venue we didn’t have to worry too much about whether it was already booked for some other event, so nailing down the date was easy.

Next we turned to developing the theme and overall concept of the event. The more we kicked around ideas, the concept kind of organically emerged: A folk circus. It fit with the types of bands and creative people we knew, and as far as we knew had never been done before in Albuquerque.

Once the concept was set, it was go time. My job: To find ten bands.

We use the term “folk” loosely. Many of the “folk” bands we know (including my own) use electric instruments and drums and some very loud songs. We were thinking more in terms of “setting” than “genre” when applying that word to the event.

With almost 10 years in the Albuquerque music community I have made connections with a lot of great musicians, so the task of finding bands was not too difficult. Once we had a date set for the event, I sent e-mails out to three-piece or bigger bands to find out who was available. Once everyone sent their reply I then made a few drafts of the order of bands until everyone was comfortable.

In hindsight, I realize I talked to too many people about the possibility of playing. I was definitely getting ahead of myself in the early weeks of planning the event. It’s my nature to over-think tasks I am responsible for, so this led to my being a bit overenthusiastic in locking down musicians that were interested and available. So, the inevitable happened: Eventually our slots were full and I had to tell friends that we were fully booked and they in fact could not play. (Next year, though!) This was definitely my least favorite part of putting this event together.

Other than having to tell folks they couldn’t play, it was wonderful to work with so many friends and musicians I’m a fan of. There’s no question, I couldn’t have done any of this if I had not made friends with so many local bands.

So, to Pyragraph readers interested in booking their own line-up for a festival, my one line of key advice is: Get over yourself and make friends. Keep in mind these kinds of friendships don’t happen overnight. In my case, it wasn’t until Wildewood started playing out almost every week that we started to make real connections.

In addition to knowing these musicians personally, every act at the Skarsgard Folk Circus is a band that has made an impression on me by way of songwriting, performance practice, and professionalism. It made the few collective hours I spent glued to my Gmail account worth it. (Thank goodness we live in a time where communicating about a future event is as easy as it is. I might not have been up to the challenge if this was all telegram, snail mail, or AOL sign-in speed; I can hear the dial tone in my head right now.) With the Folk Circus just a couple days away, I’m eager to see these 10 excellent bands play and see our concept come to life.