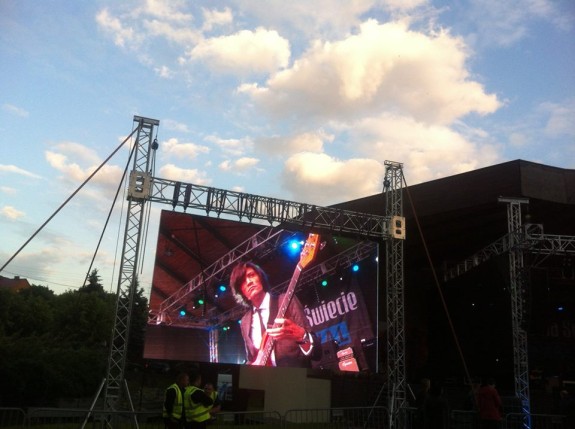 Sam mean muggin’ on a megatron screen in Poland.

The last time I saw Sam Miller, we were on a long, long walk across Albuquerque having a bitch-fest like two ladies knitting at the gin table. He likes to walk because it clears his mind and lets him reconnect with the immediacy of his existence. I think it’s partly what allows him to make such great music; the blood flow pays off during all that obsessive concentration that comes with writing, performing, recording and engineering his own compositions.

His new album You Need To Hear It, named after one of the track titles, is a product of a life lived walking long distances all over Seattle. He did all the engineering himself at Crybaby Studios. The album will be available on iTunes and CD Baby, and through his page www.sammiller.bandcamp.com. He’ll also have physical copies for sale at his CD release shows in Albuquerque and Seattle in June and July. (See details at end of article.)

You Need To Hear It is the product of aimless experimentation and rambling.

It has been a few years since Sam put together a full album, so he took some time out to fill me in on what’s been going on and whet our appetites for what’s to come.

Eva Avenue: Can you describe how this album emerged?

Sam Miller: You Need To Hear It is a collection of the best recordings I made during my three years in Seattle. While being somewhat conceptually and aesthetically consistent, it’s more a compilation or mix-tape. I really didn’t set out with an idea for a full-length album. Upon leaving Seattle, I felt like putting something together to help document and close a certain chapter of my life. These 12 songs work well together and I’m happy with how the “album” turned out.

How has your music evolved over the last few years since your last full album with Jenny Invert?

The Jenny Invert album was representative of how the band sounded when we played live. We did some overdubs and edits during mixing, but the recording project was mostly about capturing a preexisting sound, rather than creating something new while in the studio. Our process was grounded in the question, “Does this sound like us…is this the song?”

You Need To Hear It, on the other hand, is the product of aimless experimentation and rambling through various soundscapes with a sense of total creative freedom. The record is still pop-oriented, but it definitely doesn’t always sound like a band. I wasn’t ever too concerned with being able to replicate the recordings in concert. I enjoy this aspect of my music’s evolution, though it makes live performance a little problematic. Obviously, I can’t always have an 8-piece group at my disposal, half of whom sits out most of the set (I don’t think that’s what I’d want even if I could afford it).

Can you tell me the process by which you chose the cover photo for this album?

In the hall in my dad’s house in Albuquerque, there’s this picture of me from one of those Walmart backdrop-like portrait sets. I was sitting on a paint can.

When the swamp cooler’s on in the summer, the walls shake cause that thing just blasts cold air through the wall and the picture falls off the wall all the time and my dad never fixes it, there’s just a big crack down the center of it. It’s comical. Every time I’ve gone there, the picture’s kind of hanging sideways, glass cracked straight down my face, this stupid ass picture.

The process of this album was starting with something conceptually potent and I just watered it down into kind of what it is now.

I’m all about putting out the same thing different ways. Give people a sense of familiarity with what I’m doing and build on that as opposed to coming out with this all-new thing.

OK so after the Disappointing Son concept—that one photo that Willy, professional photo guy [ed. note: and Sam Miller’s brother], insisted it was the best photo he had of me. 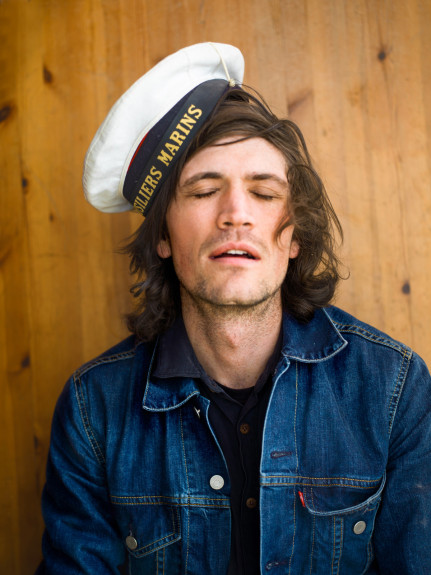 All the while I was skeptical of it but I just took his word for it, ’cause naturally I doubt my own intuitions, instincts. I was set on that photo and I sent it to a few people. I was asking if it would work for the flier for our Seattle show and my friend had already been thinking this and it was time to tell me the photo was not my best and it made me look like I was shitting or orgasming, hard to tell which one and it made my album look like it was a joke about one of those two things.

So naturally again I’m like, “Yeah, I knew it, I knew it, I look so fucking stupid in that photo. Willy just cares about how good the lighting was or some bullshit like that, he doesn’t care about flattering me.”

So I of course, respond to Willy, “Yeah I don’t know about this photo, I’ve been hearing it’s not all that great,” and Willy of course is like, “WHO ARE YOU GOING TO TRUST? I’m a professional photographer, I’m your brother, I’m telling you, this is a good photo.” So I’m like, “OK, well, this is high-fashion good? Is this beyond me?”

So I kinda stuck with it again, I’m like showing other people and I decide to go with some bland normal photo that has no character at all. 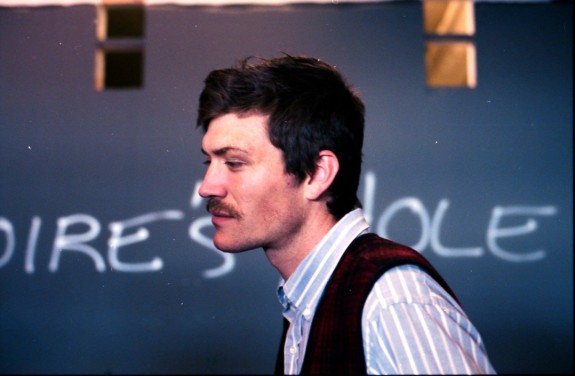 The process of this album was starting with something that was conceptually potent and I just watered it down into kind of what it is now. And that cover photo is representative of that process.

How much do you think it would’ve cost you to make this album if you had not recorded it yourself, if someone else had done all the hours of engineering and re-recording that you did?

Man, a lot. However, if I’d been paying an engineer and studio fee for every hour I spent on this record, my process would’ve been much different. First off, I wouldn’t have recorded over 40 songs before deciding on the best 12 to release. If I was making a record the professional way, I’d narrow down my song selection, and have them all fully realized/arranged before even entering the studio. Otherwise, it’s just too expensive. On this last record, I had the luxury of writing and rethinking parts without worrying about wasting someone/everyone else’s time and draining my bank account (for the most part).

This is what I know will be difficult: returning from this second tour.

Are you feeling less existentially crippled these days?

I think so. Well, I’ve been on this tour for two months and before that I was getting ready for the tour and I have the release coming up, straight into another Euro tour with Ryan [McGarvey] and I think because I had so much laid out for me, I feel less existentially crippled these days. Does that answer your question? I’ll be right back at it though right after this tour is over when I have no idea what I’m doing with my life and everyone has replaced me in the bands I used to play in. 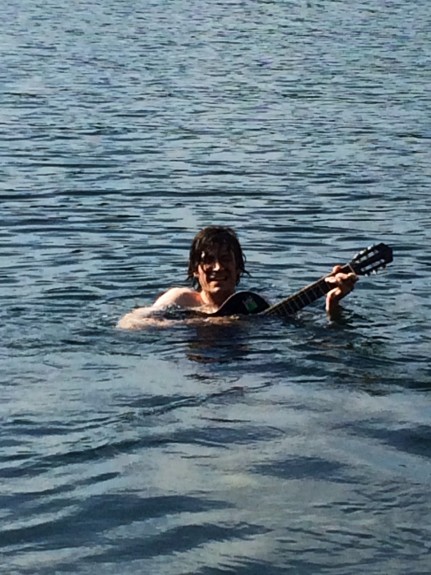 Hope that guitar is waterproof.