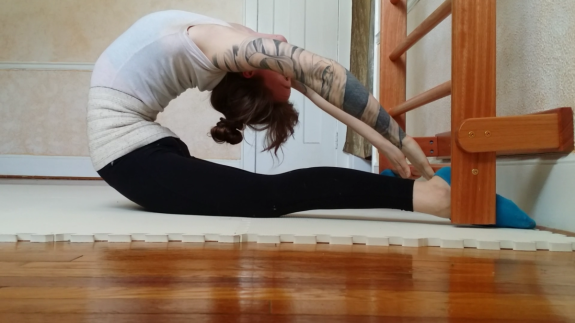 Before I started training in contortion I, like most people, saw back bending as a magical and nearly impossible feat of spinal flexibility. A few years into my training, I quickly realized it’s a balance of strength and flexibility of the surrounding muscles, tendons and ligaments. Yes, flexibility is the most obvious part a spectator sees when one bends into various shapes and degrees. However, muscular strength is an equal partner in getting me there and keeping me in a pose.

First I want to debunk the soft bones, no bones, and dislocation of bones myths. The spine is comprised of amphiarthrosis joints. This means that the back bones are made up of slightly moveable joints that are connected by cartilage. When bending forward or backward the bones are not folding in half. They really don’t do anything beyond giving the muscles a structural support to latch onto. The muscles in the back are doing all the folding. Therefore the bones are moving with the range of motion of the surrounding muscles.

I like to look at back bending from a front bending point of view. First think about what the muscles are doing when reaching forward for the toes. What do you picture? Do you envision someone trying to reach with only their arms while turning red in the face from holding their breath? Or do you envision someone folded all the way down, face buried in their shins as if they were just run over with a car? What is really happening in this position? I experimented to break it down in pieces.

Now let’s apply the physics of front bending to back bending. Again, think about what the muscles are doing when reaching backwards for the feet. This time the back muscles are engaging to pull the torso backwards. The muscles in front of the ribcage lift, expand and lengthen causing the back muscles to fold over each other. As you keep going backwards the quads engage, allowing you to hinge backwards at the hips. This in turn engages the gluteal muscles as you lift the hips up toward the sky and reach back with the arms toward the ground.

So, the next time you see a flexibility performance, remember we are just as strong as we are flexible.

Anya Shevelyuk grew up being in the spotlight. From the very beginning, she was dancing around and putting on mini-shows for her family in Russia. After moving to America, Anya began taking ballet and theatre performance classes and has performed in dozens of shows.

At the age of 18 she moved to Kansas City where she was reintroduced to circus! Anya was so inspired and still longed to be in front of an audience. 22 seemed a bit late, but she began practicing aerial, contortion and hand balancing for hours every day. After a year, her body was doing things she could have never imagined!

During this time Anya received my degree in Exercise Science with an emphasis on Health and Fitness. She currently teaches aerial hoop, flexibility, trapeze and vinyasa yoga as well as performs aerial and contortion. Anya enjoys writing on the side and aspires to motivate and inspire others.

View all posts by Anya Shevelyuk →