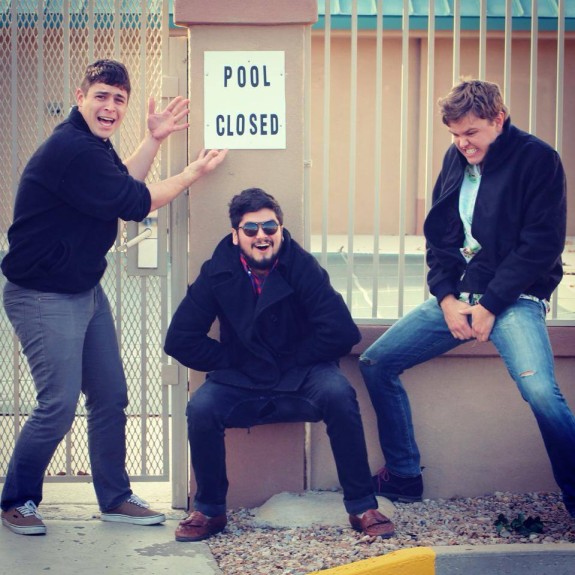 The first time I saw Pool Party play was in September of last year, at an insane beach-themed house party they were throwing. I was a little late because I had to work, and by the time I did show up it was a twilight zone of drunken others. I later found out this may have been due to some sort of energy alcohol concoction they were serving to everyone in coconuts.

The first 20 minutes there I witnessed a friend get assaulted by a female for not letting her cut in line, another face-plant into the ground and remain there with his ass in the air, and someone else get punched in the face with a piece of cake. Then Pool Party started playing. I couldn’t help but start dancing. These guys were good and I wasn’t even drunk. Yet.

As it turns out, drunk hobos don’t buy merch.

This first experience, in my mind, sort of embodies what Pool Party is all about. You may wake up with some dirt in your teeth, or the faint memory of some girl attempting to kick you in the crotch while peeing her pants, but you had a good fucking time.

In anticipation of their record and video release party this weekend (details below), I had to ask Pool Party, What’s Your Deal?

Pool Party is a surf rock band from a land without surfing. We play music about natural disasters we don’t encounter. We’re a three-piece dynamo ready to explode, but we can’t afford the TNT.

We consist of three very different humans coming together to create New Mexico’s best aquatic-chase-scene-music. Ed Shogry, lead guitarist and decided front-man, brings the musical inspiration. He is the mastermind behind the music. As an ABQ music scene veteran, Ed brings a complex musical knowledge to the band from his math rock past.

Rick “The Rock” Chapman not only brings precise and aggressive drumming to the trio, but also the capacity to create film. With years in the film industry, Rock has friends who can create awesome music videos, and personally has the skill to cut them into masterpieces.

Don’t be afraid of the overwhelming number of people trying to do the same thing as you.

The bucking bassist Alex Bernitsky makes sure it all happens. With the pragmatism of an accountant (which he is) he finagles the band into money-making situations, as well as nags everyone into actually showing up for practice.

The club was Goodbye Blue Monday, in Brooklyn, New York. We showed up to the show right as we were supposed to be starting our set (navigating a suburb in NYC ain’t easy). After a rushed set up, we hammered out a 30-minute set on a stage so small Alex nearly murdered Rock with his headstock, while Ed teetered dangerously on the edge of the pine wood. The audience was the band that played before us, and a drunk self-identified Puerto Rican hobo (self-ID’d as Puerto Rican, smell ID’d as a hobo). Knowing full well they don’t pay out, we were counting on merch sales to pay our way home. As it turns out, drunk hobos don’t buy merch.

After the show, the hobo showed Alex some drum tips on a few chairs he set up as a makeshift kit, doing so because he thought Alex (the bassist) needed some drumming tips. We then barely escaped a horde of beggars who forcefully threw our gear into the truck and demanded payment for their work.

As a band, we really dig the Klondykes, holding down the local surf scene. Kyle Ruggles and Kevin Herig also have some great jams for chillin’ in the sand. They may not even know we exist, but we’re in a fierce competition with Phantom Lake for best surf rock performers in town.

Don’t be afraid of the overwhelming number of people trying to do the same thing as you. Just do what you do and you’ll become something big. If you do it well, you’ll make that something big just a little better. In the words of Finn from Adventure Time, “Everything small is just a smaller version of something big.”

Pool Party will be premiering their video album and releasing a 12″ vinyl “Slave to the Waves” this Saturday, June 21 at Tortuga.