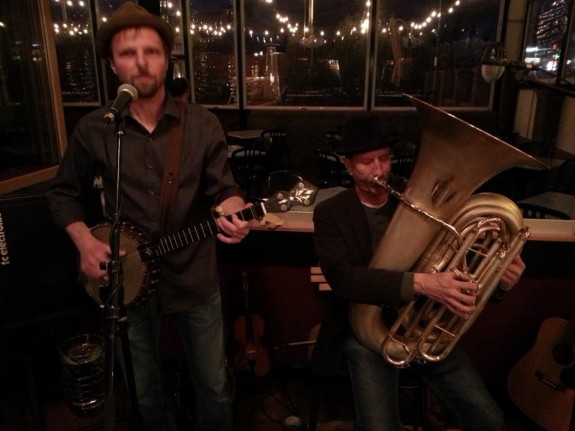 BaBa is a duo of epic BanjoTuba proportions. This seems like such a weird combo until you hear it and it reminds you of all the Dixieland music you used to listen to. By the way, I love bands with, erhm, unconventional instrumentation.

Tuba player (tubist?) Mark Weaver has played on many, many recordings (he’s a local legend—I had heard about him for years before we actually met) including this one from The Handsome Family.

BaBa will be performing in Albuquerque at DUOPALOOZA! this Sunday, June 8 at Marble Brewery.

I’m so stoked that they will be playing and I had to ask them, What’s Your Deal?

We perform old jazz and country tunes along with songs about cryptozoology, silent films, alcoholism, New Mexico, love, hate, evil, tree climbing, dead cats, animals that aren’t cats (both living and dead), Chinese astrology, legislative advocacy, getting old, intelligence, people who are late for appointments, and people who talk to much. We are working on a new song about cuttlefish. Our genre is called Cactus Metal. Here’s us playing a song called Jimmy Time.

More than half of the notes Mark plays on the tuba are actually so low the human ear can’t hear them. He developed this innovative style following his participation in the Biosphere 3 project, during which he spent an entire year living as an aquanaut in a submersible dwelling 60 feet below the Pacific Ocean, off the coast of northern California. While engaged in the project, he was exposed daily to the sonorous communications of migrating gray whales.

We’ve both spent a lot of time listening to and learning from the original Cactus Metal performers.

When he was six years old, Steve built his first banjo out of a broomstick handle, squirrel intestines and the skull of a coyote. He didn’t begin playing this instrument until he was in his early 30s, after discovering it beneath a dirty blanket in the basement of his parents’ house. Although he’s acquired several commercial banjos over the intervening years, he still performs on the coyote skull banjo on special occasions.

Last year, we played a show at a bar in Colorado. The crowd was extremely puzzled why a banjo and tuba would appear in the same band. Some were indifferent. Others were outright hostile. One drunken patron sharpened a pool stick with a knife and demanded that we play a cover version of The Eagles’ “Take It Easy.” We don’t get this type of reaction often.

For the last several years, we’ve both spent a lot of time listening to and learning from the original Cactus Metal performers of the 1920s and 1930s, people like Jelly Roll Morton, Dock Boggs, Django Reinhardt and The Carter Family, as well as later innovators in the genre such as Tom Cora, Walt Koken, The Velvet Underground and Ornette Coleman.

Try to smile every once in a while.