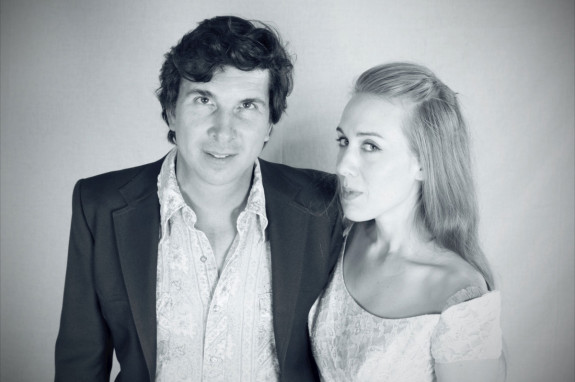 I met Brennen Leigh and Noel McKay just last year, when we were booked at a tiki-themed bar on one of the first frigid Tuesday nights of winter.

Needless to say, the bar was nearly empty and I basically ended up performing for Brennen and Noel. They were a great audience, and when it was time for their set, Brennen said she understood that it was late on a weekday night and wouldn’t be offended if I took off before their set ended. Even though I’m kind of the old lady at heart (perhaps like the one Brennen wrote about in this song) who would rather have gone to bed than stay out on a frosty November evening, I had to stay. They were so great.

Also, really friendly. They told me they occasionally tour with a giant, slobbery redbone coonhound. I countered with photos of my chihuahua.

Brennen Leigh and Noel McKay will be performing in Albuquerque, NM at DUOPALOOZA! this Sunday, June 8 at Marble Brewery.

I hope they’ll bring the coonhound.

Some nice quotes about us will hopefully do:

“Before the World Was Made is a witty, heartfelt record of dusty barroom shuffles, sassy two-steps and ethereal country-folk. It’s informed by the vintage duets of George Jones and Melba Montgomery, as well as the more modern pairing of John Prine and Iris DeMent.” —Chicago Tribune

I thought these folks were gonna kill us. It was a sufficient ruckus that the cops showed up.

“Before the World Was Made is a delicious mix: raw, retro country plus sweet irony. That’s apparently the specialty of Brennen Leigh and Noel McKay, the Austin-based duo whose debut is hilarious, sentimental and profound, usually all at the same time.” —CMA Close Up

Brennen: I grew up in the midwest playing country music with my brother Seth. I moved to Austin in 2002. I worked on my songwriting there, played music with lots of fantastic people and eventually started collaborating with Noel. We made our first record together in 2013 and are now touring the country in our car with our redbone coonhound.

Noel: I started playing in bars when I was 15 years old. I had a band with my brother called McKay Brothers for a good little while. When I was a young songwriter I played a show with songwriting legend Guy Clark and he took a shine to my songwriting, took me under his wing and has been in my corner ever since. I’m most happy traveling and writing songs with Brennen.

Noel: One time my brother and I got booked at this crappy place in a town called Yantis in North East Texas. Having spent lots of time in South Texas I’ve written several songs that are in both English and Spanish. It only took one of those before the 20 or so people in the bar were standing in front of the stage expressing their extreme dissatisfaction at our cross-cultural offering.

One particularly meth-addled looking fellow kept saying, “Why would you do that?” over and over again. I thought these folks were gonna kill us. It was a sufficient ruckus that the cops showed up. I was pretty disappointed when they left. We had to jump through some hoops to get paid but we did. We rolled up the gear in record time. We made like a bakery truck and hauled buns down the road “muy pronto!”

Loves It!, The Carper Family, The Cactus Blossoms, Silas Lowe.

Brennen: Be nice! Your fellow musicians are your friends.