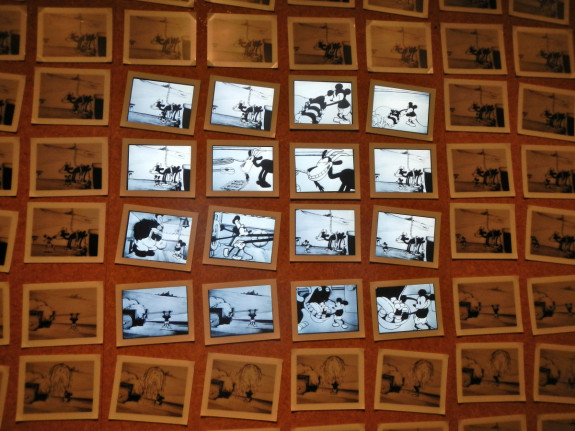 Display of stills from an animation at the Walt Disney Family Museum. Photo by Punk Toad.

As a gift for my 41st birthday, my wife took me to the Disney Museum at the Presidio in San Francisco to see the Mary Blair exhibit. In college, I had dismissed Disney movies as schmaltz, but have grown to appreciate them as an adult. For me, Disney is still a mixture of incredible craft and cloying sentimentality, but the former trumps the latter, and the best of the Disney artists have much to recommend. So I was excited to see the work of one of my favorite Disney concept artists, Mary Blair.

It was as if “Disney Studio Artist” was some magic monkey that spontaneously executed whatever idea sprung from Walt’s head.

When we entered the exhibit, the lights were so low it was hard to make anything out. Feeling ripped off, I went back outside to the ticket taker to ask if this was on purpose. She told me that this was to prevent the paintings from fading and started to explain lightfastness and the UV effects on pigments, but I dashed back to the exhibit before she could finish. Having seen the sun damaged results of poorly-cared-for and little-regarded commercial work in the past, I understood the issue.

Once my eyes adjusted to the light, the Blair show was amazing. It was four stories of nothing but Blair, a comprehensive look at her career. It started with her early personal work, then the concept art she did for films like Peter Pan and Alice In Wonderland, ending with her her children’s books, sculptures and tile work. There were also some designs for the It’s a Small World ride, but fortunately they chose not to play that terrifying song. Some of the images were, by today’s standards, a little racially insensitive, but in the words of Ricky Gervais, “that was before they knew racism was bad.” Something like that, anyway.

If this was the smaller exhibit, the main museum must have been huge. I was afraid we wouldn’t have time to take it all in. This didn’t turn out to be a problem.

Upon entering the Disney Museum proper, we were confronted with a giant picture of Baby Walt. This was followed by more baby pictures and a loud animated film about his childhood. Then more pictures of Walt and his parents. Without a word between us, my wife and I breezed through all this with barely a glance.

In the next room were video clips and stills of early Disney films like the first sound-synced Mickey film, Steamboat Willie. After this were clips of early attempts at animation by Disney himself. No, not Steamboat Willie. Disney didn’t draw a single frame of Steamboat Willie. This was animation you seldom see, and for good reason. It was really, really bad. I hoped that this would be the main Walt part of the exhibit, and the rest would be about the art.

On the second floor, finally, were actual drawings and paintings. Most of these were credited to “Disney Studio Artist.” It soon became clear that the museum was all about Walt, and little about anything else. It was as if Disney Studio Artist was some magic monkey that spontaneously executed whatever idea sprung from Walt’s head. Fortunately, there were a few artists who got shout-outs.

There was a wall dedicated to Ward Kimball, drawings and pencil tests from a Snow White scene that had been cut from the film. There was video of Walt explaining why it had to be cut, then Kimball, who had spent eight months animating the scene entirely himself saying (in essence), “them’s the breaks.”

There was a brief exhibit dedicated to the ink and paint department. With the exception of Mary Blair and a few scant others, Disney hired the majority of his female employees to ink and paint cels, as long as they were not Jews.

There was another wall dedicated to the Mickey Mouse comic strip and some of the Disney comic books. The best of the comic books were done by Carl Barks, but Barks was not mentioned. While mentioned by name on the accompanying plaque, Floyd Gottfriedson, who did the Mickey strip, signed all his work the trademark Walt Disney signature. Much like Disney Studio Artist, he received no credit for his work, one more monkey in Disney’s stable.

Scattered throughout the museum was work by other Disney animators and concept artists I admired: a few small pieces by Gustav Tenggren and Eyvind Earle, some drawings by animators like Marc Davis and Milt Kahl. But it was mostly more work by Disney Studio Artist, video interviews with Walt, and more pictures of Walt and his family. Walt and his family on vacation in South America. Walt and his family in their backyard. It was like watching someone else’s home movies. And there were home movies, including one of his daughter, Sharon, swimming in a pool to demonstrate, I guess, that she liked to swim in a pool.

I capped it off by stabbing my finger in the air and declaring just a little too loudly, “He ruined a lot of lives.”

It hadn’t occurred to me until later that this was The Disney Family Museum. I had just assumed that by “family” they meant it was for the whole family, not that it was literally a museum dedicated to Disney’s family, but you could say I was warned.

Mostly it was about Walt.

There was a brief section dedicated to “one of the worst times in his life” when the Disney animators went on strike and tried to form a union. There was no union, but Disney, or at least, his brother Roy (since Disney was too incensed to do it himself) agreed to some concessions to end the strike. To make up for this, Disney later testified in the McCarthy hearings and managed to get some of the union organizers blacklisted, but of course this part wasn’t mentioned in the exhibit. Like many other tidbits of Disney history, I explained all this to my wife (the most patient woman in the world) and capped it off by stabbing my finger in the air and declaring just a little too loudly, “He ruined a lot of lives.”

My wife then made haste through the crowd and to the next exhibit as I hurried to catch up.

I’m not saying Walt didn’t have a lot to do with many of these films. Particularly the early ones. Even though he couldn’t draw for shit, he was a great director and had an intuitive sense of timing and story. Those films wouldn’t have been what they were without him, though later he would serve mainly as producer and executive dictator as he got more involved in his theme parks.

And of course there was a big-scale model of Disneyland.

The exhibit ended with a wall of editorial cartoons published upon Disney’s death in 1966, most featuring some version or other of Mickey Mouse shedding a single giant tear.

And that was it. That was the Disney Museum. All the decades of animation that followed Disney’s death didn’t seem to matter. Not that I much cared for them—as far as I was concerned, everything went downhill after The Rescuers—but I guess this was where The Disney Family got off the bus.

But this, it turned out, was not all. If I hadn’t had to go pee, we would have missed a room downstairs dedicated to Marc Davis. This exhibit had been included, according to a plaque, “at the insistence of Disney’s daughter Sharon.”

Thank you Sharon. You are a fine swimmer.

We enjoyed what there was of Marc Davis and the other Disney artists, and the Mary Blair exhibit was worth the trip in itself, but I couldn’t help being disappointed with what was absent. Particularly notable was the absence of one of my favorite artists, Bill Peet, one of the few that Disney allowed a prominent screen credit. Peet directed films like The Jungle Book and The Sword in the Stone, and scripted and entirely storyboarded (he could actually draw, and draw quite well) 101 Dalmatians. But there was no Peet to be seen.

Maybe Peet will get his own show someday in the smaller building. And maybe someday Disney Studio Artist will get his or her own permanent exhibit in some room in the basement underneath the Marc Davis room, the monkey finally revealed. Until then: there’s always Mary Blair. For a little while, anyway. 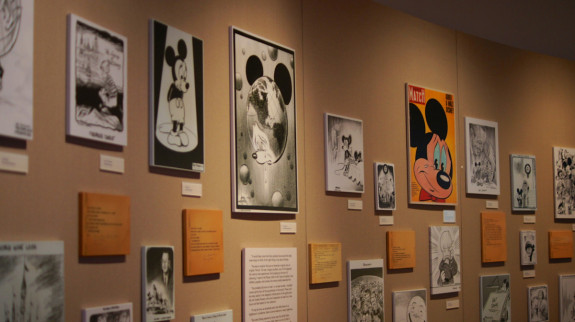